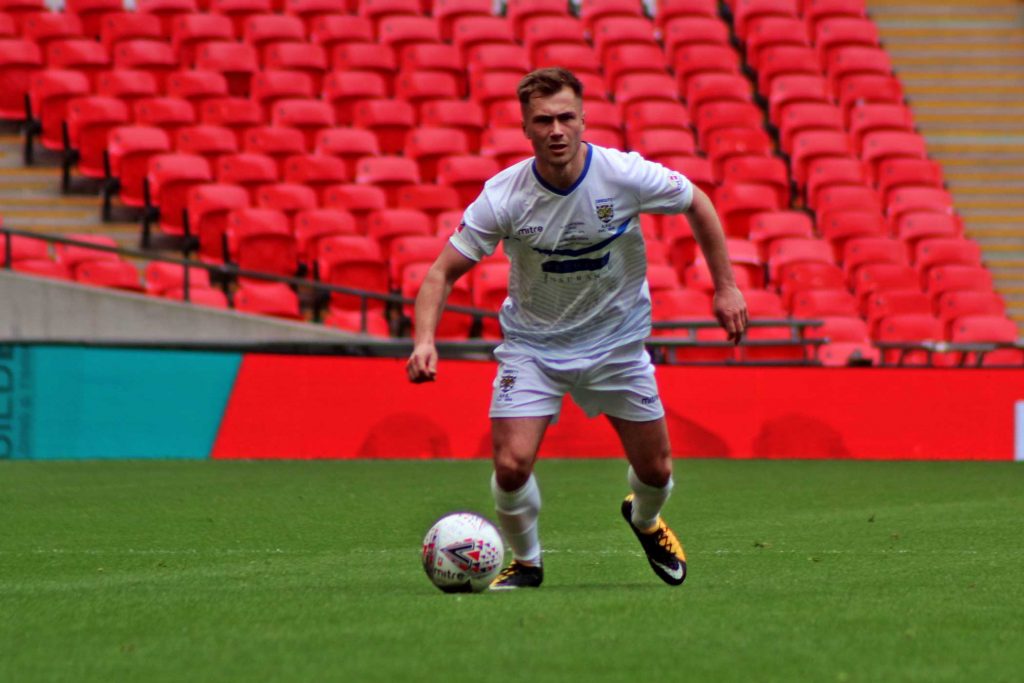 Consett AFC have today revealed that midfielder Jake Orrell, who was stretchered off during yesterday’s FA Vase final, isn’t as seriously injured as first feared.

The 23-year-old midfielder was knocked unconscious in an aerial challenge in the 23rd minute of the game against Hebburn Town at Wembley.

There was a long hold-up as Consett’s physios assessed him, and then handed over to the stadium’s specialist head trauma team.

Jake, who was an ever-present during the Vase run, was stretchered away and taken to hospital for scans.

Happily, after a thorough examination he was released, and was able to travel home today with the rest of the players, who stayed in London overnight.

Consett AFC Chairman Frank Bell said: “The good news is Jake is out of hospital and he’s fine, apart from a bit of a sore head this morning.

“He was caught by a stray arm or elbow and was knocked unconscious, and it was very worrying when he was down for such a long time.

“Our physios Rachel Davison and Gavin Scott did a great job in getting to him and assessing him so quickly, and then handing over to the FA medical team when they realised the seriousness of the incident.

“The FA specialist head trauma team followed all the protocols for a head injury, getting him into a stable position, conscious again and sending him to hospital, where he was thoroughly checked over.

“It was definitely a blow losing him so early in the game, as he’s a very good player, but it also shows the value of having properly-trained people in place to deal with instances like this.

“The main thing is Jake’s fine, and I’m delighted to say that in the week running up to the final he agreed a new long-term contract with the club. It’s great to have him on board.”