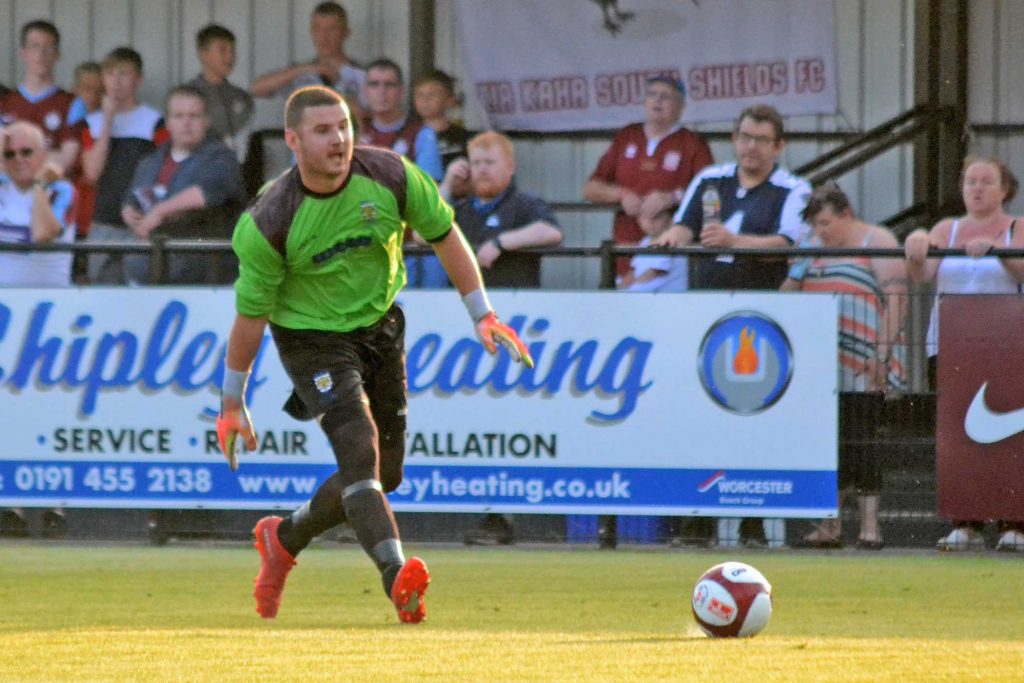 Goalkeeper Kyle Hayes was Consett’s star man as they suffered a 1-0 defeat at South Shields in their latest pre-season friendly tonight.

He led by example as the Steelmen fought a spirited rearguard action against a strong Mariners side, who play in the top flight of the Northern Premier League, two divisions above Consett

Hayes made a string of excellent saves to spare his team the same fate as recently promoted Stockton Town, who lost 6-1 at the 1st Cloud Arena at the weekend.

The only goal of the game, played in front of an impressive crowd of 1,012, came five minutes before half-time, when Consett cheaply conceded possession deep in their own half.

Callum Ross took the ball off Carl Lawson and played through the in-form Darius Osei, who slid the ball under Hayes for his third goal in two games.

It wasn’t quite one-way traffic, with Dale Pearson, Matty Slocombe and Jermaine Metz all having decent chances in the first half – the latter’s deflected shot hitting the top of the bar.

That one mistake aside, Consett defended well as they were forced to keep their discipline and shape for long spells of the game.

Shields began to lay siege to their visitors’ goal after Consett made a raft of substitutions from the hour mark onwards, but Hayes’ heroics and some determined defending by those in front of him meant the hosts had to settle for 1-0.

Consett’s final pre-season friendly is this Saturday, 24 July, when they entertain another Northern Premier League side, Workington, at Belle View Stadium.