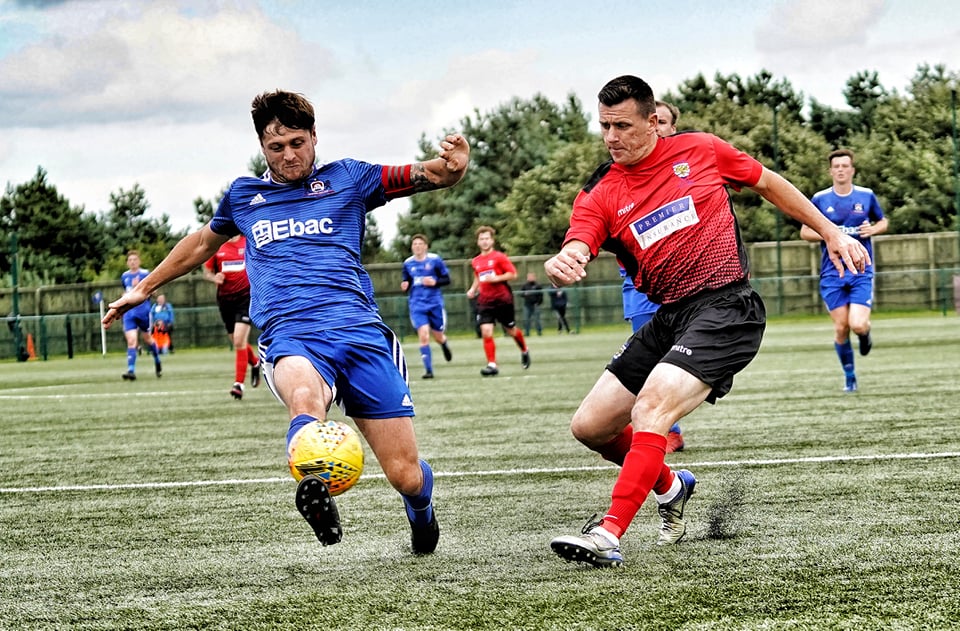 Consett’s 100% start to the season came to an end today, when they lost 3-2 to Newton Aycliffe in dramatic late fashion.

A goal from Liam Jarvie two minutes before half-time gave the visitors the lead at Belle View Stadium, against the run of play.

Chances came and went for both sides in the second half, and another supersub appearance by evergreen striker Colin Larkin, pictured top, looked like it had rescued a point for the Steelmen.

He reacted first when Aycliffe keeper Adam Pickford could only parry Dan Marriott’s shot in the 85th minute, and grabbed a deserved equaliser.

It looked like the game would end honours even, with the sides getting a point apiece and the status quo maintained.

But things took a late twist when Aycliffe were awarded a penalty in the second of four scheduled added minutes.

Keeper Kyle Hayes saved Sonni Coleman‘s spot kick, but the striker reacted quickest to net the rebound and gave the visitors a 2-1 lead.

Things got even worse for Consett when Darren Holden was sent off. Then Hayes then got caught in possession, which allowed Coleman to nick a third goal in the fourth added minute.

Consett did get one back in the seventh minute of added time, when Dale Pearson scored from the penalty spot to make the final score 3-2.

The result means Newton Aycliffe go top, and wins for North Shields and Thornaby mean Consett will head to Whickham on Tuesday night in 4th place.

The crowd at Belle View was a season’s best 554. The next home game is next Saturday, 21 August, when we face Bridlington Town in the FA Cup.