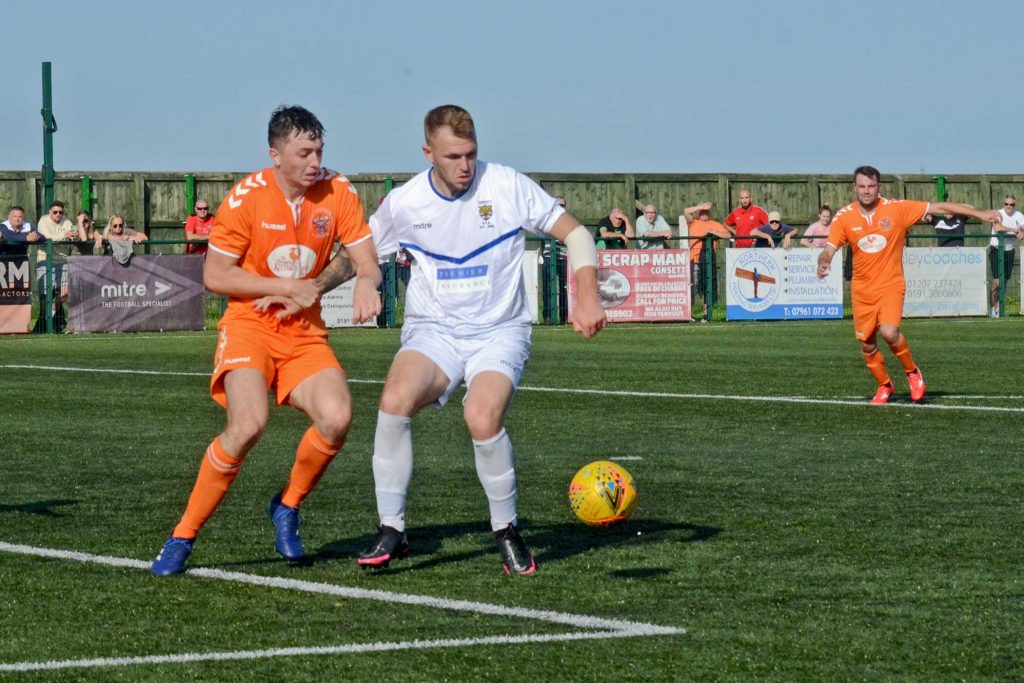 Consett left it late but grabbed a point in a thrilling 2-2 draw with table-topping Thornaby in today’s 2nd v 1st clash at Belle View Stadium.

The Steelmen trailed 2-0 at half-time, but laid siege to their visitors’ goal in the second half, and a point was the least they deserved in an excellent advert for Northern League football.

Thornaby, unbeaten in seven games this season, took the lead on five minutes when Joe Scaife-Wheatley won the ball and fed Craig Hutchinson, who beat Kyle Hayes to make it 1-0.

Dale Pearson almost levelled on 18 minutes after being played in by Callum Guy, but his shot rattled the crossbar.

On 28 minutes Consett were handed a golden chance to equalise when Pearson was clipped by defender Nathan Guru, and the referee awarded a penalty.

The big striker took the spot kick himself, but fired it inches wide of the right-hand post.

It was a costly miss, as five minutes later Thornaby made it 2-0. Right-back Lee Moore whipped a great ball in from the right, and centre-back James Frazer scored with a thumping header.

Consett had dominated possession and created the lion’s share of chances, but found themselves two-down at half-time to their quick-breaking visitors.

The second half saw the Steelmen lay siege to the Thornaby goal, and they felt they had a good shout for another penalty when left-back Olly Scott went down under challenge, but the referee waved claims away.

On the hour Pearson was denied by the woodwork for the second time, as his shot came back off the post after good work by Jermaine Metz.

On 66 minutes Consett were back in the game thanks to an absolute screamer from Jake Orrell. He picked up possession 30 yards out and launched a thunderbolt in the top corner.

In the 71st minute Luke Carr hit the post from 20 yards and Colin Larkin’s follow-up struck the bar – the fourth time the woodwork had saved Thornaby.

Consett kept knocking at the door, and in the 86th minute their perseverance was rewarded. Orrell’s shot hit the post, but the ball rebounded to Dale Pearson, who fired his eighth goal in nine games.

Larkin and Calvin Smith had chances to grab a winner in five minutes of added time, but were just off target with their efforts, and a thrilling game ended with honours even at 2-2.