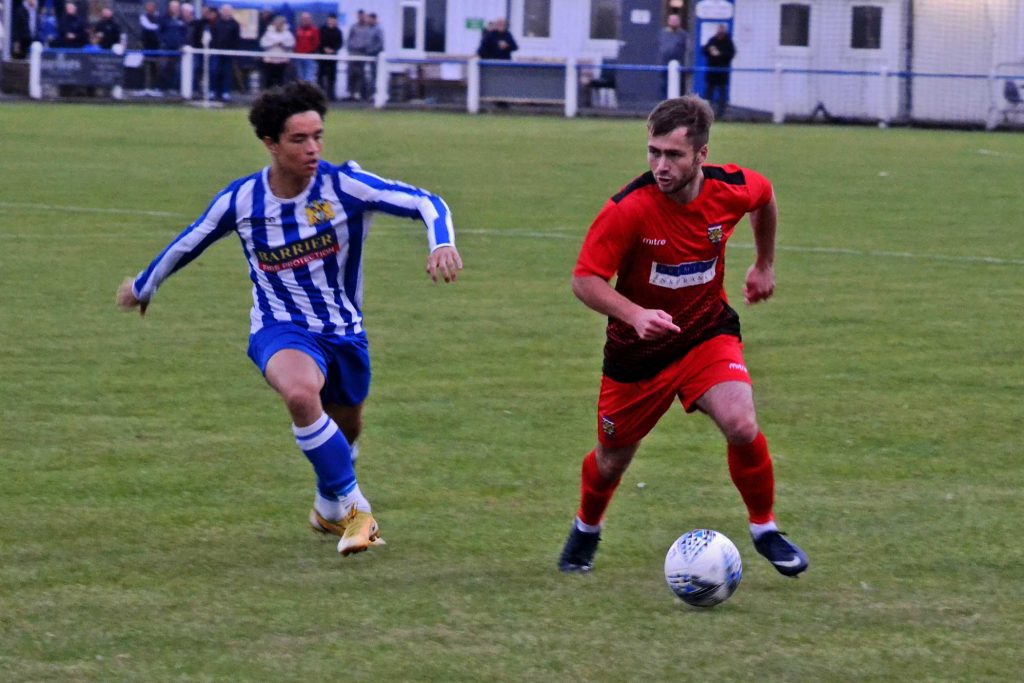 Four goals in a breathless 17-minute spell paved the way for a 4-2 win at Newcastle Benfield tonight which saw Consett return to the top of the Northern League.

In typical Consett style they came from behind to do it, went in 4-1 in front at half-time, and had to fight a determined rearguard action in the second half.

Dale Pearson was unlucky not to open the scoring after six minutes when he ran onto a long ball, but his shot came back off the post with the keeper beaten.

Veteran striker Paul Brayson – who else? – gave Benfield the lead on 24 minutes, finishing from close range after good work by Cyril Giraud and Sam Walton down the left.

But Consett were level on 31 minutes when Jermaine Metz made a great run into the box, Pearson kept it alive as defenders flung bodies in the way, and Jake Orrell, pictured top, fired home for 1-1.

On 40 minutes the Steelmen took the lead, after Metz once again burst into the box, and Dale Pearson stabbed out a foot at his cross – or was it a shot? – to convert from six yards. It was the in-form striker’s 9th goal in 10 games this season.

Two minutes later it was 3-1, as Stephen Callen beat the Benfield goalkeeper to left-back James Martin’s cross to head into his unprotected net.

The third minute of added time at the end of the first half saw Consett score again, as Calvin Smith headed in Luke Carr’s right-wing corner.

If Benfield were shell-shocked by going in 4-1 down they didn’t show it, and they really upped the pressure on their visitors in a proverbial game of two halves.

They got a goal back on 56 minutes when Cyril Giraud cut in from the left, beating two men, before firing a low shot past Kyle Hayes at his near post.

Benfield enjoyed a lot of the ball without creating too many clear-cut chances, and it took Consett until the 72nd minute to have their first goal attempt of the half, Carr firing wide from 25 yards.

Callum Guy then forced a good save from keeper Alfie Gordon, and Arjun Purewal headed wide from Metz’s cross.

The best chance of all to wrap the points up came in the 80th minute, when the pass of the game from Carr sent Pearson clear, but the keeper made an excellent save.

There was a late scare when Benfield sub Archie Leonard beat his man and the onrushing Hayes to the ball, but his shot from a tight angle rolled wide of the far post.

When the final whistle went Consett had three well-earned points in the bag, which was enough for them to overtake Thornaby and return to the top of the table.