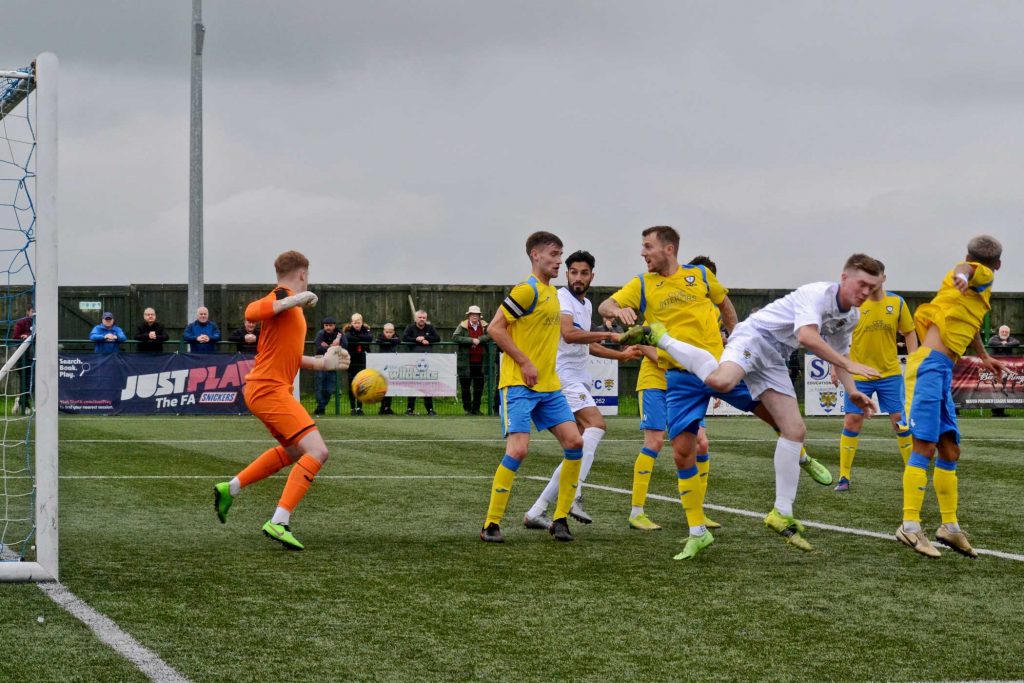 Consett extended their lead at the top of the Northern League 1st Division to four points today after beating Whitley Bay 3-0 at Belle View Stadium.

The result maintained the Steelmen’s excellent average of scoring three goals a game, but the game was into its closing stages before they secured the points against a stubborn visiting side.

Indeed, Consett were grateful to goalkeeper Kyle Hayes for two excellent saves early in the second half, when the score was 0-0.

The Seahorses arrived in 12th place, but had conceded only eight goals in seven games – one fewer than Consett.

Sure enough, they proved hard to break down, and gave as good as they got in a tight first half.

The closest Consett came to a goal was on 25 minutes when super work by Jermaine Metz down the right saw Stephen Callen’s effort saved at point-blank range by Bay keeper Dan Lister, pictured below.

Lister was in action again four minutes before the break, tipping over Dale Pearson’s well-struck effort, to ensure the half-time score was 0-0.

Hayes produced the first of his big saves just a minute into the second half, getting a good strong hand to Jason Chanayire’s shot, and eight minutes later he stood up well to save from Richard Coulson.

The importance of the saves was emphasised in the 58th minute, when Consett took the lead. A defender clipped the heels of Callen as he chased a great Calvin Smith pass into the box, and the referee had no hesitation in awarding a penalty.

Dale Pearson, who missed from the spot last week against Thornaby, stepped up to take the kick, and although Lister got a hand to the ball, he couldn’t keep it out. It was the big striker’s 10th goal in 11 games this season.

It took until the 83rd minute for Consett to make the game safe, and it was a great moment for young centre-back James Metcalfe, whose glancing header from Jake Orrell’s left-wing corner made it 2-0, pictured top.

Five minutes later it was 3-0 when sub Darren Holden played in Luke Carr, whose 20-yarder was helped in by a big deflection which left the keeper flat-footed, pictured below.

With second-placed Thornaby losing 5-0 at home to a West Auckland side who suddenly seem to have clicked, the win extended Consett’s lead at the top to four points.

Next up for the Steelmen is a visit to Ryhope CW’s Recreation Ground on Tuesday night. Kick-off is 7.30pm.