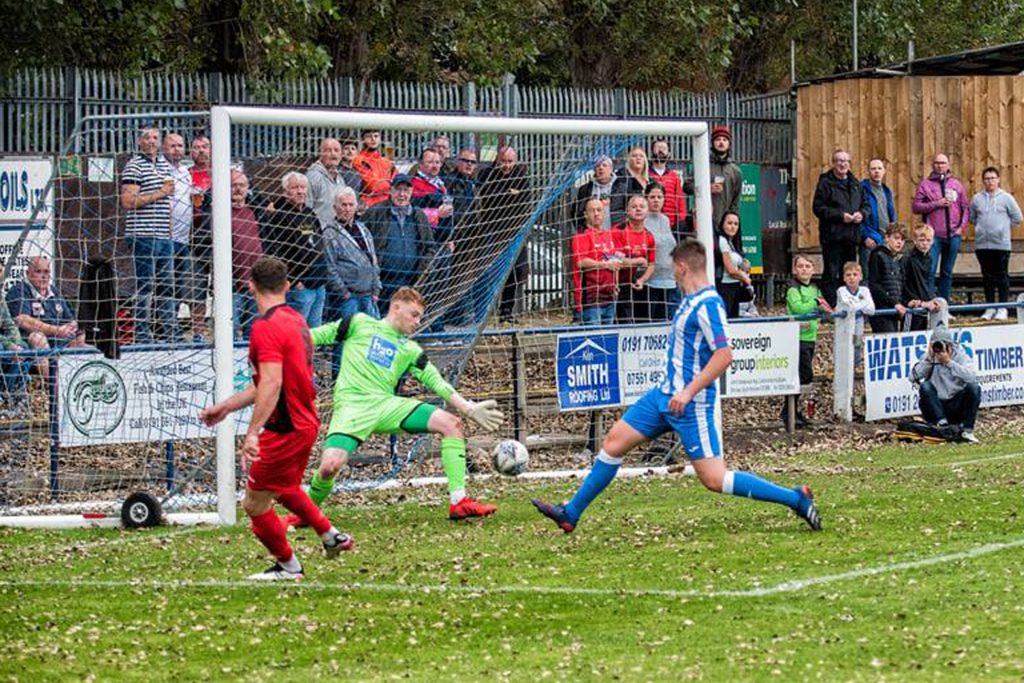 Consett remain six points clear at the top of the Northern League Division One after winning a thrilling game 3-2 at Whitley Bay today.

The Steelmen came from behind to take the three points, but were left hanging on for the victory after a spirited response by the home side at Hillheads.

Terry Mitchell’s side were handed the chance of a perfect start when Stephen Callen was fouled in the box after just 20 seconds, but the striker’s penalty was saved by Daniel Lister.

It wouldn’t be the last time he would thwart the visitors, pulling off a string of fine saves to prevent them running away with the game.

But it was Whitley Bay who opened the scoring on 13 minutes, thanks to a great finish by Mitchell Ramsay.

On 33 minutes the league leaders got their noses in front, when great work by Jermaine Metz down the right saw him pull the ball back for Jake Orrell to score with a simple finish.

It remained 2-1 at half-time, and on 53 minutes Consett increased their lead with a goal that had more than an element of good fortune about it.

Some lovely build-up play created a chance for Smith, and although his effort was blocked on the line, the rebound hit James Martin and bounced in to make it 3-1. It was his first goal for the club.

Whitley reduced the deficit on 57 minutes, when Adam Shanks latched on to Jamie Dunn’s header and fired home to make it 3-2.

Shanks and Michael Speed both had chances to grab an equaliser for the home side as they put their visitors under lots of pressure in the last half hour.

But Consett managed to hold on to their lead and add three valuable points to their total in front of a bumper crowd of 637, including another big travelling contingent.