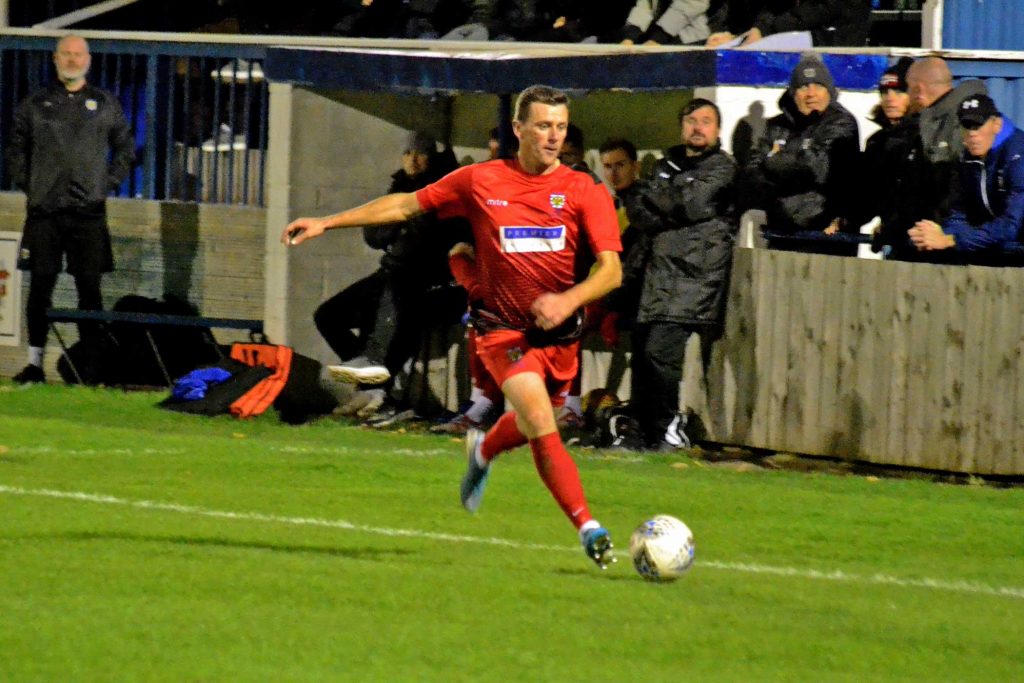 Consett had to settle for a point on their travels tonight after a below-par performance saw them draw 1-1 at Billingham Town.

Manager Terry Mitchell made five changes to the team which won in the FA Vase at the weekend, and his side started the game strongly.

Ryan King almost opened the scoring after six minutes, but his first-time effort from Jake Orrell’s left-wing cross came back off the post.

The Steelmen did take the lead on 10 minutes when another Orrell pass from the left found Colin Larkin, pictured top, 12 yards out.

The veteran striker took three touches of the ball – the first to control it, the second to nudge it past his marker, and the third to drill it into the net to make it 1-0.

Consett were kicking into the teeth of a strong wind which ruined the game as a spectacle, and made good football almost impossible.

But they were made to pay for not building on their good start when the home side equalised in the 39th minute, Connor Rennison firing home the rebound after Kyle Hayes had saved Danny Earl’s shot.

Consett were grateful to Hayes for a couple of good saves to keep the scores level in the second half, and the nearest they came to scoring in a forgettable 45 minutes was six minutes from the end, when sub Carl Lawson fired over the bar from Larkin’s set-up.

However, the point could prove crucial at the end of the season, particularly as the division’s form team West Auckland moved into second place, three points behind Consett, with a 3-0 win at Seaham.

Newton Aycliffe surprisingly lost 4-2 at home to Ashington, who are now fourth, while Ryhope CW and Thornaby from the chasing pack drew 1-1.