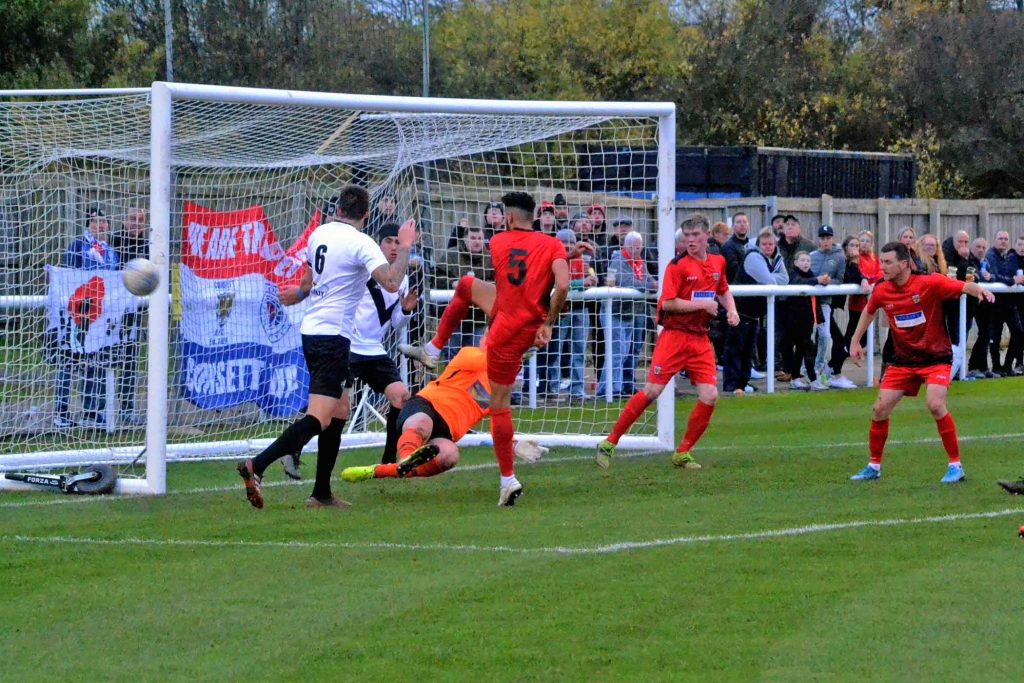 League leaders Consett had to settle for a point on their travels, after a thrilling 3-3 draw at Ashington.

The Colliers dominated the first half, but had to dig deep to twice come from behind in front of a bumper 735 crowd – including a big Consett contingent – at the DWMedia Stadium.

Visiting keeper Kyle Hayes had already made two good saves and Ashington had also hit the bar before the hosts took the lead in the 28th minute.

Max Cowburn put in a great first-time cross from the right and Craig Spooner made it 1-0 with a close-range header.

Consett skipper Arjun Purewal almost equalised on 36 minutes when he hit the post with a header, and then saw keeper Adam McHugh make an unbelievable point-blank save, pictured top, as he tried to lash home the rebound.

The Steelmen were level a minute later when the resulting corner was half-cleared, and young centre-back James Metcalfe fired in off the post from just outside the box.

It remained 1-1 at half-time, but it took only two minutes of the second half for Consett to get their noses in frnt.

Luke Carr’s pass sent Jake Orrell scampering towards the byline, and his low cross across the six-yard box was turned into his own net by helpless defender Curtis Coppen.

Hayes made two more fine saves to keep Consett in front, but feel he could have done better when Ashington made it 2-2 on the hour.

He failed to deal with a cross from the right, and it was sent back across goal for Harmison, for Luke Salmon to score with a close-range volley.

Hayes made amends with a superb double save from Adam Johnson, and there were more chances at both ends, with both teams going for the win.

Consett thought they’d grabbed a winner in the 81st minute when Darren Holden’s excellent cross from the left put a 14th goal of the season on a plate for Dale Pearson, in his first game back from suspension.

But Ashington had other ideas, and made it 3-3 in the 86th minute, when Danny Anderson scored from close range.

With two minutes to go Consett had a big penalty shout turned down when a defender appeared to handle the ball on the ground, but a point apiece was probably the right result.