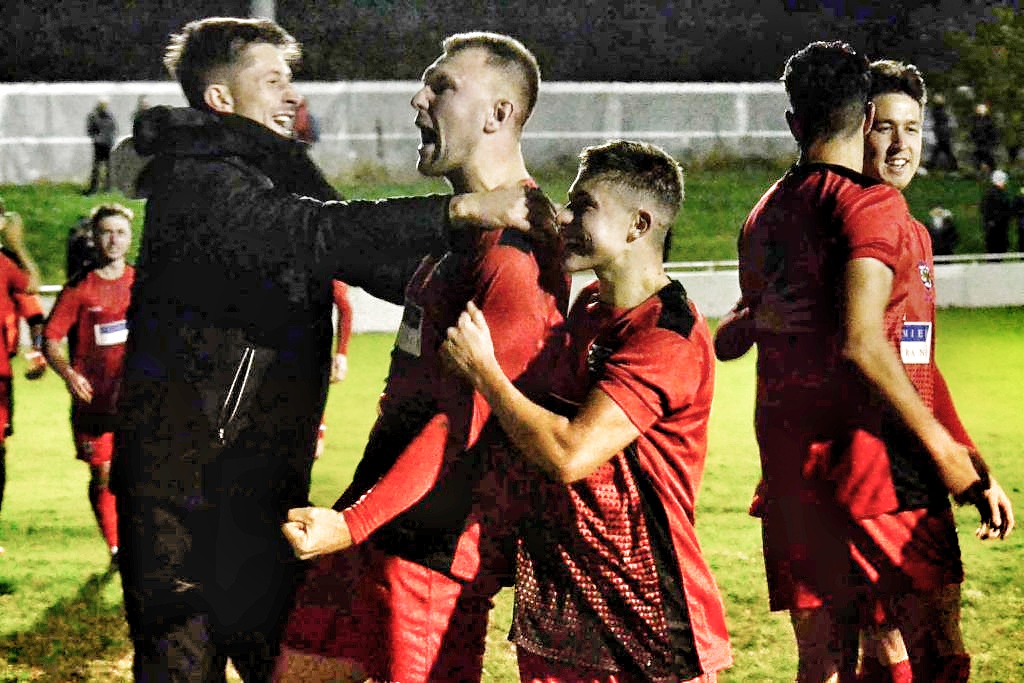 Consett will be in Monday’s draw for the FA Vase 3rd Round after a dramatic penalty shootout win at Thornaby this afternoon.

Dale Pearson was the Steelmen’s hero, scoring the decisive kick to give them a 4-3 win after a 1-1 stalemate during the 90 minutes.

Terry Mitchell’s side also had to change goalkeepers at half-time and played the last 20 minutes with 10 men after Matty Slocombe was dismissed for a second yellow card.

It was a game of few clear-cut chances, and Thornaby took the lead on 32 minutes with their first attempt on goal.

A diagonal ball found Cyril Giraud, who cut in from the left, beat his man and finished low past Kyle Hayes.

There was an anxious few minutes for the visitors when their goalkeeper needed extensive treatment after colliding with the goalpost in the 39th minute, but he was able to continue.

His team levelled a minute before the break with the best move of the game, as Dale Pearson’s cross from the left picked out Colin Larkin‘s run perfectly, for a first-time finish from six yards, pictured below.

Hayes was unable to continue for the second half, and was replaced in goal by Ross Coombe, but there was little change to the pattern of the game, with neither keeper having to make a save.

The tide seemed to turn against Consett when Slocombe was dismissed in the 71st minute fafter picking uip a second yellow card.

But the 10 men managed to see out the game, and even created a couple of half-chances to avoid the penalty shootout which had looked inevitable all afternoon.

The shootout got off to a dramatic start when Thornaby’s Craig Hutchinson put his effort over the bar, and Consett right-back Jermaine Metz saw his kick saved by Josh Mazfari.

But when Thornaby missed their fifth kick, the pendulum swung Consett’s way, and Dale Pearson held his nerve to fire home, and give the Steelmen a 4-3 win on pens.

They will be joined in Monday’s draw by fellow Northern League clubs Newcastle Benfield, North Shields (who also needed a penalty shootout to beat North Ferriby), and Billingham Synthonia, who pulled off the shock of the round, beating highly-fancied West Auckland.