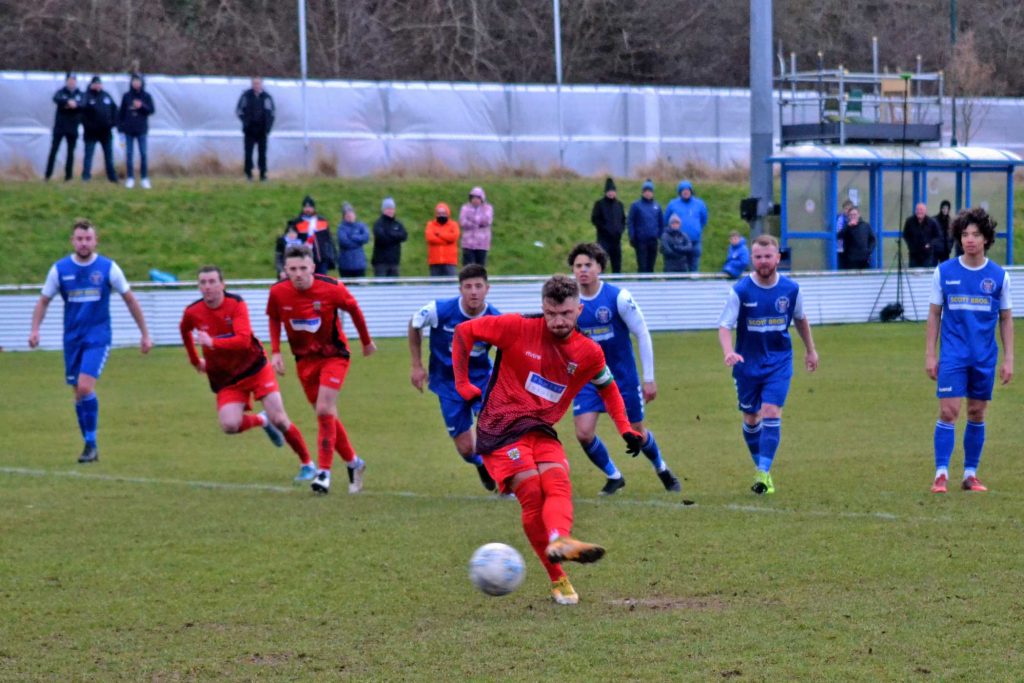 League leaders Consett saw their Northern League title charge blown slightly off course today as they were beaten 3-2 at Thornaby.

It was third time lucky for the Teessiders, who drew 2-2 at Belle View back in August and were knocked out of the FA Vase on penalties after a 1-1 stalemate in November.

The home side, who started the day third in the table, went ahead after just five minutes at a blustery Teesdale Park, as Daniel Flounders finished low past Kyle Hayes.

Consett, kicking into a strong wind, had the ball in the net two minutes later through Scott Heslop, but the referee had already blown for a foul on the keeper, pictured below.

Thornaby almost doubled their lead on 23 minutes, but Nick Cassidy made an excellent clearance off the goal-line, and Consett managed to get to half-time with the score still 1-0.

With the wind behind them in the second half, the Steelmen fancied their chances of turning the game around, but instead fell further behind on 52 minutes as Craig Hutchinson doubled Thornaby’s lead.

The visitors almost reduced the arrears on 55 minutes when Heslop’s pass found Darren Holden, who brought a good save from keeper Josh Mazfari.

They received a lifeline on 62 minutes when the referee decided Heslop had been brought down by Nathan Guru, pictured above, and skipper Luke Carr converted the resulting penalty, pictured top, to make it 2-1. It was the little playmaker’s 10th goal of the season.

Thornaby were temporarily reduced to 10 men on 65 minutes when Hutchinson was sin-binned for dissent, and Consett brought on midfielder Alex Francis, pictured below, for his debut in a bid to capitalise.

Heslop brought a save from Mazfari with a smart turn and shot from the edge of the box, but it was Thornaby who got the next goal in the 83rd minute.

With Consett appealing for a foul on Jake Orrell in midfield, the home side broke quickly on them, and the ball was fed out to Cyril Giraud on the left, who fired past Hayes for 3-1.

Two minutes later Jake Orrell set up a grandstand finish as he smacked the ball into the bottom corner from 25 yards, pictured below, for his ninth goal of the campaign.

Consett almost grabbed an equaliser in the fourth of five added minutes when Carr got on the end of a cross from the left, but Mazfari made a great save down low to his right.

The final whistle signalled a third defeat in four games for Consett, who took some consolation from the fact that North Shields, who started the day in second place, seven points adrift with two games in hand, had lost 1-0 at Seaham Red Star.

Three points for Thornaby saw them leapfrog North Shields into second spot, five points behind Consett, with the same number of games played. It seems the title is not quite the two-horse race that many people were predicting just yet.