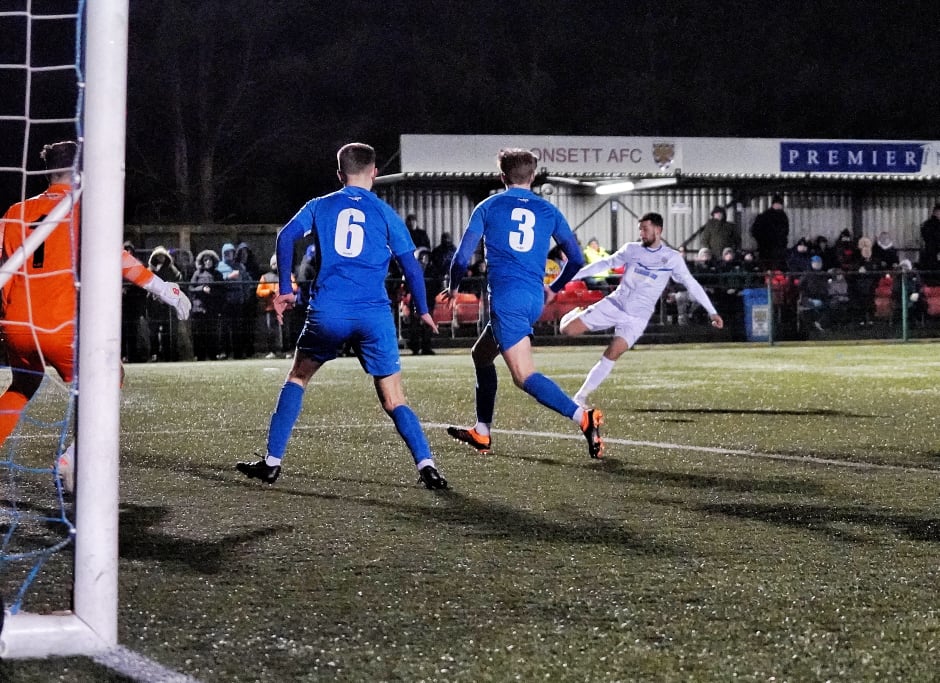 A stunning strike from their No 2 was enough for Consett to beat dogged Billingham Town at a bitterly cold Belle View tonight in a fitting way to mark ‘all twos day’.

Right-back Nick Cassidy, re-signed from North Shields in early January, scored the only goal of a hard-fought victory over the relegation-threatened visitors in the 73rd minute.

He met a Darren Holden cross from the left on the volley with his right foot, pictured top, smashing the ball past former Consett keeper Jack Norton to secure a deserved win.

The victory means Consett are now 11 points clear at the top of Division One of the Northern League, with nine games left to play.

Consett drew 1-1 at Billingham earlier in the season, and the visitors again gave a good account of themselves, despite being second-bottom of the table.

Billingham had the strong wind behind them in the first half, but it was Consett who made the best chances.

Dale Pearson fired over from a superb first-time Holden cross on seven minutes, then was just beaten to the ball by the outstretched arm of Norton after a fine move involving Cassidy, Luke Carr and Jake Orrell on the half-hour.

A minute later Consett had the ball in the net, when Pearson’s shot was saved by Norton and centre-back Matthew Ridley pounced to convert the loose ball, but was ruled offside.

On 35 minutes Billingham had their best chance of the game with a shot from distance, but Kyle Hayes, who hadn’t had a lot to do, tipped the ball over the bar.

Consett should have gone ahead in the 36th minute when another superb cross from Holden picked out Carr six yards out, but he headed the ball up and over the bar.

The game remained goalless at half-time, and with the wind getting even stronger after the break, Billingham found it difficult to get out of their own half at times.

Carr’s low effort by saved by Norton at his near post on 52 minutes, and on 65 Pearson was sent clear with only the keeper to beat, but put his shot the wrong side of the post.

Pearson then teed up Carl Lawson, whose well-struck effort was cleared off the line by defender Andrew Wilson, and you began to wonder if it was going to be one of those nights.

But with the visitors finding it increasingly difficult to get out of their own half in the face of a strengthening wind, that superb Cassidy strike broke the deadlock.

Consett saw out the game comfortably, without being able to get a second goal to seal the win.

With no game this weekend, the next fixture is now at North Shields on Wednesday 2 March in the 1st Round of the new Division One Cup, KO 7.30pm.