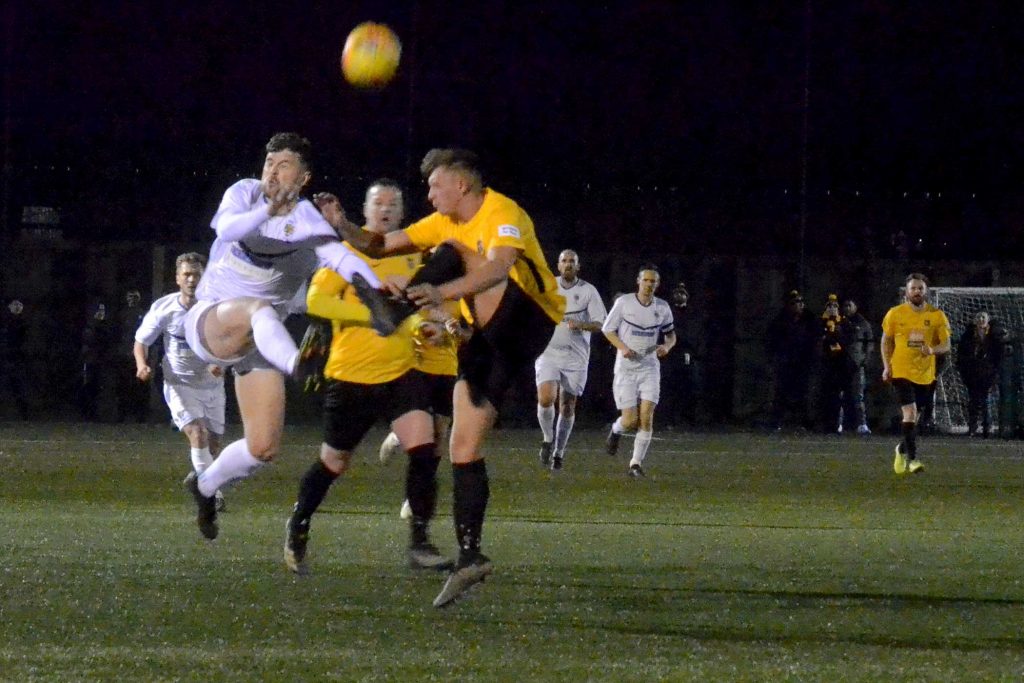 League leaders Consett were beaten at home by mid-table opposition for the second time in four days tonight, losing 2-1 at Belle View to Crook Town.

The stuttering Steelmen again went behind, got themselves back in it, only to concede again, just as they had against Redcar Athletic at the weekend.

They remain nine points clear of second-placed Thornaby, who have played the same number of games, but third-placed North Shields, who have a point less than the Teessiders, now have five games in hand.

The first chance of the game fell to Scott Heslop in the 18th minute after he latched onto Colin Larkin’s pass, but he couldn’t get enough on his shot to trouble visiting keeper Ronan Makepeace.

Consett had their goalkeeper Kyle Hayes to thanks for a top drawer save in the 22nd minute, as he pushed a fiercely-struck 25-yarder from Joey Smith over the bar.

A minute later Larkin broke clean through on goal for Consett, but uncharacteristically fired high and wide.

Hayes was grateful to his woodwork in the 26th minute, as a free-kick from Crook skipper Lee Hume rattled the crossbar.

Heslop hit the side netting from 20 yards as the game began to open up, and a deep cross from the right found Dan Capewell, whose scuffed shot was deflected for a corner.

Crook took the lead in the 40th minute when a through ball sent Craig Moody running at the home defence, and he blasted the ball past Hayes from 12 yards to make it 1-0.

It stayed that way at half-time, but it only took seven minutes of the second half for Consett to level, as midfielder Alex Francis, pictured below, scored his first goal for the club with a deft header from Darren Holden’s corner.

The goal gave Consett a lift, and they began to dominate, but they seemed to lose their momentum after two big decisions went against them.

First, on 55 minutes, Heslop was flattened by Crook centre-back Oscar Eckley-Aldsworth just outside the box as he ran through on goal, but the card was yellow rather than red, and the resulting free-kick came to nothing.

Then in the 70th minute they had a huge shout for a penalty when a shot by Holden appeared to strike a defender’s arm, but the referee waved away their appeals.

But in the 76th minute the Steelmen had the wind knocked out of their sails when Crook scored again, with Mason Hurworth running through unchallenged before firing left-footed past Hayes to make it 2-1.

Consett ran out of ideas long before the end, and only time – and North Shields catching up with some of their games in hand – will tell how damaging this defeat might be.