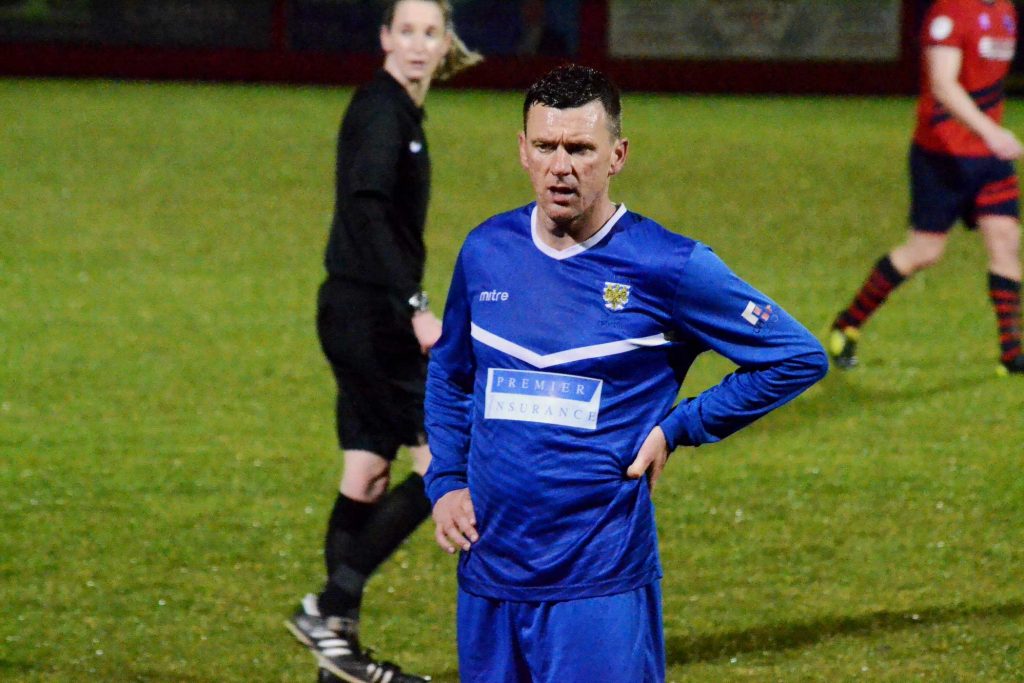 Consett showed what they’re made of after two back-to-back defeats by making Division One Cup progress with a fine 5-1 win at Redcar Athletic tonight.

The other Steelmen claimed the bragging rights 11 days ago when they won 2-1 at Belle View in the league in the clubs’ first-ever meeting.

But Consett took their revenge at Green Lane with their best performance in several weeks, to secure their progress to a home quarter-final against West Auckland.

The game was played in torrential conditions, and it rained goals from the start as Consett went about their business with real purpose.

The visitors took the lead on 10 minutes when Colin Larkin, pictured top, played a cross in from the right, Scott Heslop missed it, but Jake Orrell was on hand to score his 10th goal of the season from close range.

On 22 minutes it was 2-0 when home keeper James Dawson was unable to hold a fierce 30-yarder from Darren Holden, and Lewis Green followed in to finish the rebound to claim his first goal for the club.

Redcar pulled a goal back on the half-hour through Jordan Rivis, who powerfully headed home from a right-wing corner.

But three minutes later Consett’s two-goal lead was restored after a great run by Matty Slocombe, who fed the ball to Green, who set up Scott Heslop to make it 3-1. It was the striker’s fifth goal in eight games since joining from Dunston.

It remained 3-1 at half-time, and after a fairly even first 15 minutes of the second half, Consett started to take control.

Redcar were grateful to Dawson for good saves from Green and Orrell, while Consett’s Ross Coombe made a good save from home dangerman Isaac Walker to add to a flying stop he’d made in the first half.

Consett always looked in control, and it was no surprise when Colin Larkin made it 4-1 in the 83rd minute, finishing low past the keeper from Slocombe’s sliderule pass.

In the 89th minute Consett rounded off the night with a fifth goal, and it was Colin Larkin again, with his 14th of the season, this time from Carl Lawson’s pass.

Such a good win was an important boost to morale after two recent league defeats, and we return to league action on Saturday with a visit to Bishop Auckland, KO 3pm.