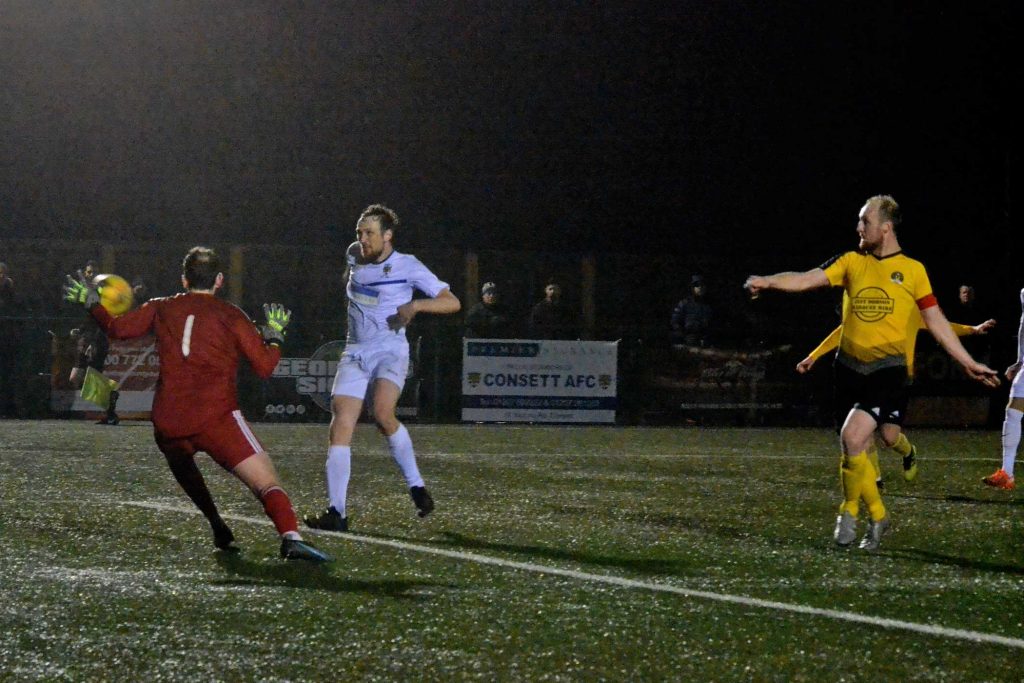 Recent stuttering form has left the Steelmen needing to win their last four games, and hope for at least one slip-up from title rivals North Shields, if they are to win the league and promotion.

And for much of the night it looked like their hopes might fade into the rolling fog which threatened to envelop Belle View Stadium.

West had the better of the first-half exchanges, and Consett had keeper Kyle Hayes to thank for keeping them in the game, after he made a couple of crucial saves.

On 13 minutes he made an unbelievable point-blank stop from West top scorer Jordan Blinco’s header, and Dan Capewell cleared Liam Potter’s follow-up off the line.

Four minutes later Hayes denied Blinco again, making a smart save low to his left, and when the West No 9 did get the ball past the Consett custodian in the 33rd minute, Capewell again cleared off the line.

The hosts’ best effort of the half came from James Martin, whose great strike from the edge of the box was tipped over by West’s one-time Consett keeper Sam Guthrie.

Consett brought on Dan Marriott at half-time to give them more of an attacking threat, and he had the first effort three minutes in, but it was deflected wide.

Striker Scott Heslop, who displayed tremendous workrate all night, had a decent penalty claim turned down in the 50th minute, then, midway through the half, fired just over after turning his marker.

The all-important goal came in the 81st minute when Consett were awarded a free-kick out wide on the left. Jake Orrell arrowed the ball to the back post, where Dan Capewell ghosted in to volley home his fourth goal for the club, pictured top.

The lively Marriott looked like he might seal the win with a second goal in added time, but was thwarted by a superb tackle from West skipper Gary Brown.

When the final whistle it was to big cheers of joy and relief from the Consett fans in the excellent midweek crowd of 453. North Shields’ games in hand might make them favourites, but Consett aren’t out of the title reckoning just yet.