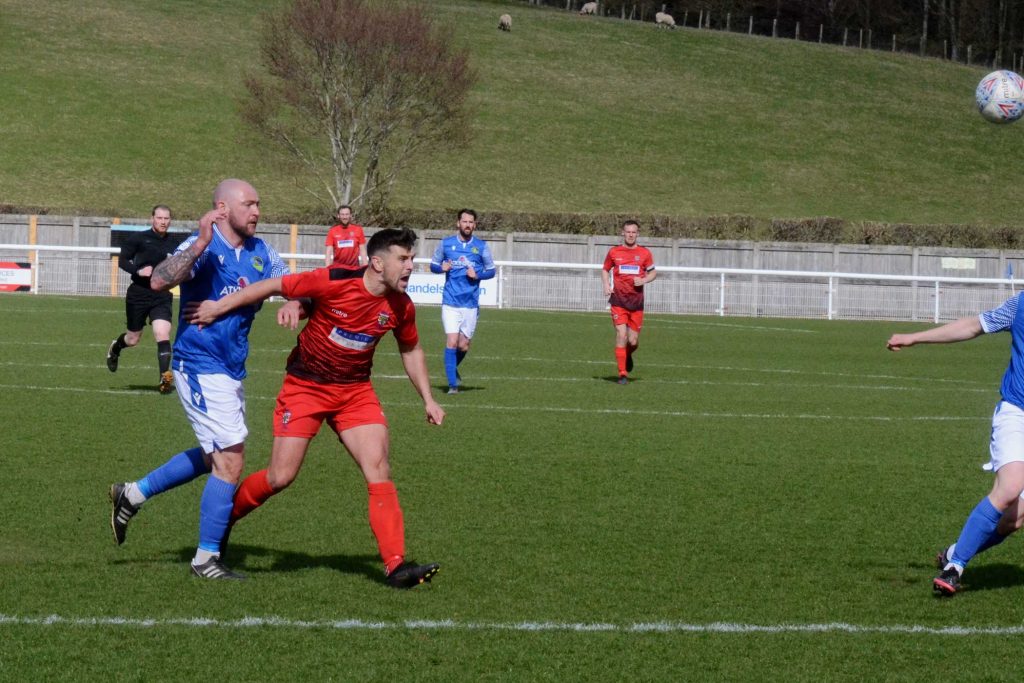 Consett’s hopes of a first-ever Northern League title are hanging by a thread after the last away game of the season ended in a 2-1 defeat at Penrith today.

Andy Coyles’ team needed a win at his former club to keep the pressure on second-placed North Shields, who have four games in hand over the leaders.

But for the second weekend in a row the Steelmen threw away the lead to suffer a disappointing defeat, and the gap at the top has now closed to three points after North Shields won.

Consett took the lead at in the 24th minute at Frenchfield Park when Scott Heslop played the ball off Penrith skipper Grant Davidson and a huge deflection, pictured top, gave keeper Arran Taylor no chance.

Heslop limped off in the 36th minute, to be replaced by David Dowson, and the sub had a chance almost immediately from Darren Holden’s pass, but couldn’t get a clean shot away, pictured below.

Holden himself then had two decent opportunities to increase Consett’s lead before the break, but missed both, and it remained 1-0 at half-time.

Five minutes into the second half Jake Orrell had Consett’s best chance of the game when Dowson flicked on Nick Cassidy’s free-kick, but the No 10 was denied from close range by the keeper.

It was a big save, as the Cumbrians – in desperate need of points for their relegation fight – equalised in the 63rd minute, when Alfie Brunskill took advantage of a defensive error to fire home.

With news filtering through that title rivals North Shields were beating Guisborough 4-2, Consett needed a goal, but when it came in the 88th minute the matchwinning strike was at the other end.

Jamie Armstrong picked out Davidson with a right-wing corner, and although Consett keeper Kyle Hayes made a good save from the centre-back’s powerful header, Luke Brown reacted quickest to the loose ball to smash home the winner from close range, pictured below.

Consett now need to win their final two home league games, against in-form Northallerton Town and seventh-placed Ashington, to give themselves any hope of the championship.

North Shields have now completed their home fixtures, and end the season with six consecutive away games, starting at Thornaby on Wednesday.

Consett take a break from league action by hosting West Auckland in the Division One Cup quarter-final on Tuesday, but could be toppled as leaders for the first time since September 1 by the time they next kick a ball in Division One.