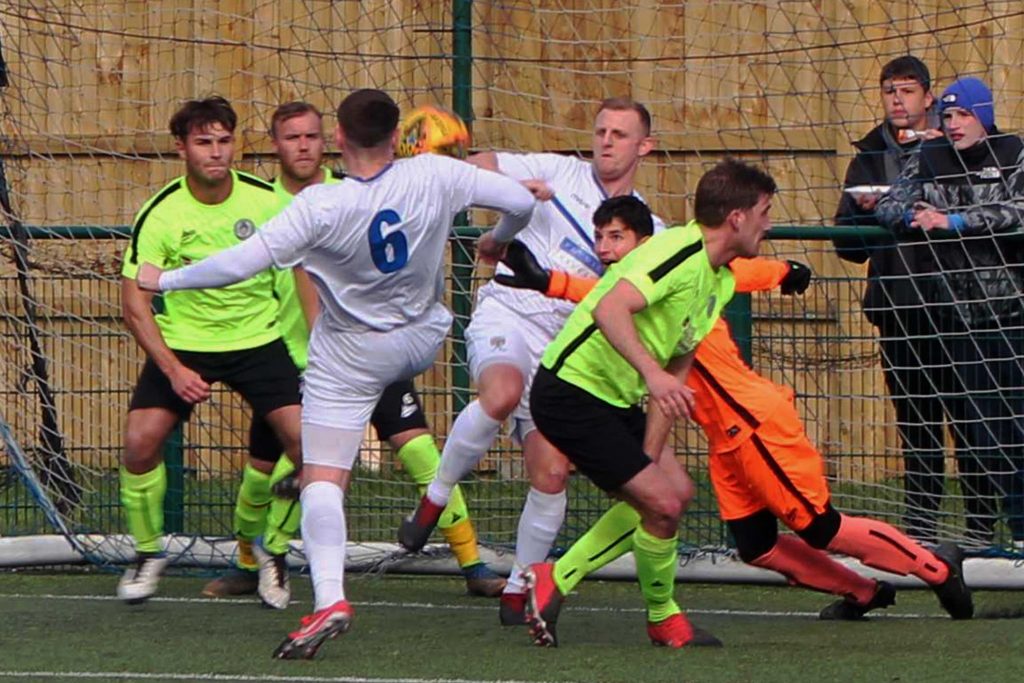 Consett’s slim title hopes were all but extinguished as they suffered a home defeat today to relegation-threatened Northallerton.

It was a case of ruing missed chances in the first half, as the Steelmen could easily have gone in at the break three or four goals up.

But a much more even second half saw the visitors snatch the points courtesy of a late long-range strike from Dale Hopson.

As has often been the case recently, manager Andy Coyles was forced into fielding a much-changed side through injury, particularly in defence. All four recognised centre-backs were injured, so Consett started with James Martin and Alex Francis in central defence.

Northallerton, despite being second-bottom of the table, came to Belle View as one of the form sides in the league, with just one defeat in their last seven games.

The visitors took the early initiative, almost scoring twice in the first few minutes. A defensive error allowed Alex Bruton in on goal, and while he beat keeper Kyle Hayes, Martin was able to get back and make a goal line clearance. Then Nathan Stephenson had a one-on-one, but Hayes came out on top.

The home side responded in positive fashion and were inches away from taking the lead on nine minutes when Luke Carr just failed to reach Darren Holden’s excellent cross for what would have been a tap-in.

On 18 minutes there was a good chance for the returning Scott Heslop as he latched onto a through ball from Colin Larkin, but his attempted lob was saved by advancing keeper Aleks Petrovic.

Consett were well on top at this stage, launching attack after attack, but somehow failed to score in a remarkable 15-minute period. Carr saw a goalbound effort cleared off the line, Larkin’s header was saved by Petrovic’s foot, and Larkin smashed a shot against the bar after beating two defenders.

There was a half-hearted penalty appeal as Carr’s persistence saw him rob Shaun Ryder of possession and home in on goal, but the former Consett player managed to put in a last-ditch challenge, bundling Carr to the ground in the process.

Ten minutes before half-time Carr turned his marker on the edge of the area, only to see his shot cannon back off the base of the post.

As the second half started it was clear that Northallerton were happy to sit with as many men behind the ball as possible and try to catch the home side on the break and it worked.

The first chance of the half arrived on 57 minutes and it was the visitors who almost scored as veteran striker Micky Rae, who brought a flying save out of Hayes just before the break, beat him to a deep cross and the resulting header skimmed the top of the bar.

Three minutes later, Rae went close again as an effort from just inside the area was inches wide, and on 63 minutes the lively Jack Stapley forced a smart save out of Hayes with his feet at his near post.

Consett were enjoying the bulk of possession, but making no headway against the packed visiting defence. In an attempt to shake things up the manager made a double change, with Carl Lawson and David Dowson replacing Heslop and Larkin, but in truth it made little difference.

It wasn’t until the 80th minute that there was another serious effort, and it was again Carr who hit a firm shot from the edge of the area but it was narrowly off target.

The only goal of the game arrived on 82 minutes as a long ball fell to Dale Hopson 25 yards out, and his effort, possibly with the aid of a slight deflection, seemed to deceive Hayes and nestle in the roof of the net.

Northallerton almost doubled their lead five minutes from time when substitute Luke Jones was inches wide with a cheeky backheel flick. Consett huffed and puffed in search of an equaliser which never looked like coming.

This defeat, coupled with North Shields’ 1-0 win at Redcar Athletic, means the North Tyneside outfit only need a point from their remaining four games to secure the Northern League title.

Consett, meanwhile, need to regroup and focus their attention on the League Cup and the probability of an end-of-season play off.
* Full match report, stats and more pictures HERE.