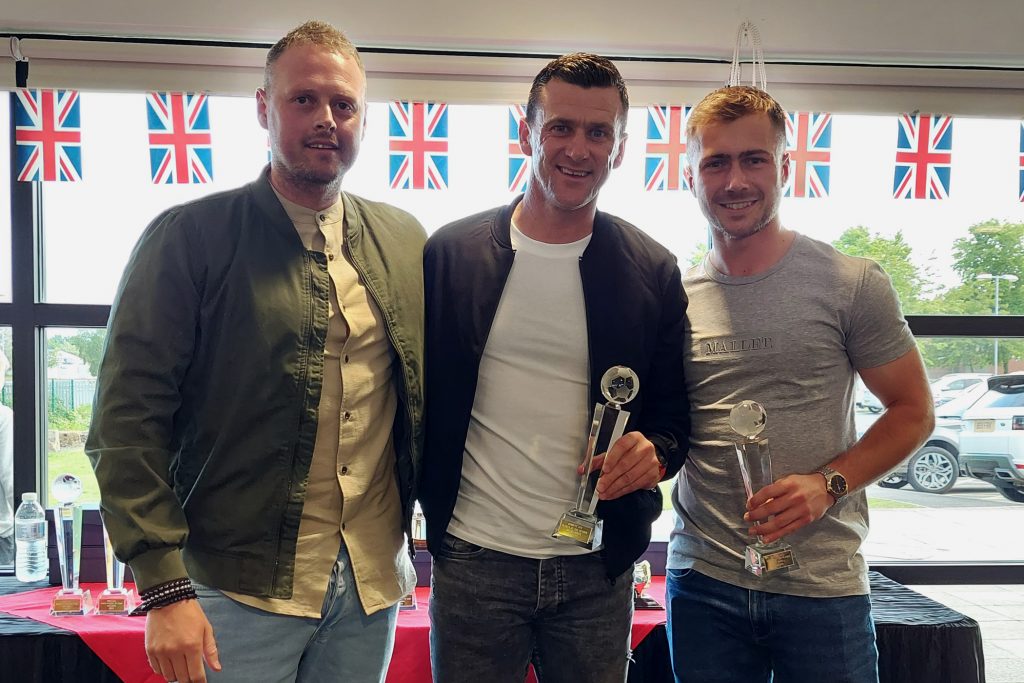 After two Covid-interrupted campaigns, the men’s team and Consett Ladies were delighted to hold a joint awards night, with manager Andy Coyles and his ladies’ counterpart Matt Gatiss handing out individual honours for the season.

Chairman Frank Bell was master of ceremonies for the well-attended event, where the trophy which the men’s team won for finishing as Northern League runners-up was on display.

The first task of the night was to present the men’s team with Northern League runners-up tankards, and a succession of individual awards followed.

First up was the Player of the Season award, chosen by the club’s committee, and it proved too close to call, with Jake Orrell and Colin Larkin, pictured top with manager Andy Coyles, named as joint winners.

Next up was the Manager’s Player of the Season award, and it was a second trophy of the night for Jake Orrell, who showed remarkable consistency during the season, playing in all 50 games and contributing 11 goals to our promotion effort.

Players’ Player of the Year was next, and there was a second trophy of the night for Colin Larkin, whose 17 goals, seven assists and all-round outstanding attitude, workrate and commitment made him a popular figure in the dressing room.

The top goalscorer for the season was Dale Pearson, with 20 goals, but he was unable to attend to collect his award. Dale’s contract with the club has ended, and after scoring 67 times in 84 games over three seasons he has decided to move on. We wish him all the best.

The winner of the Goal of the Season award was present, however … step forward Nick Cassidy, whose only goal of the season turned out to be a matchwinner in the 1-0 home win over Billingham Town in February.

The award for the Most Improved Player went to Dan Marriott, the local lad whose goal at Histon in the play-off secured our promotion. The manager said he believes we haven’t seen the best of Dan yet, and he has what it takes to become “a superstar” at the club.

Last but not least there was a third award of the night for Colin Larkin, who was an overwhelming choice as Supporters’ Player of the Season. He received his award from Derek Smith.

Finally, Consett AFC skipper Arjun Purewal took the mic to thank everyone for their support and pay tribute to his teammates on a job well done, after the club achieved its pre-season aim of winning promotion.

He warned that stepping up into the Northern Premier League for the 2022-23 season is a big challenge, but one which the players and staff are all looking forward to.