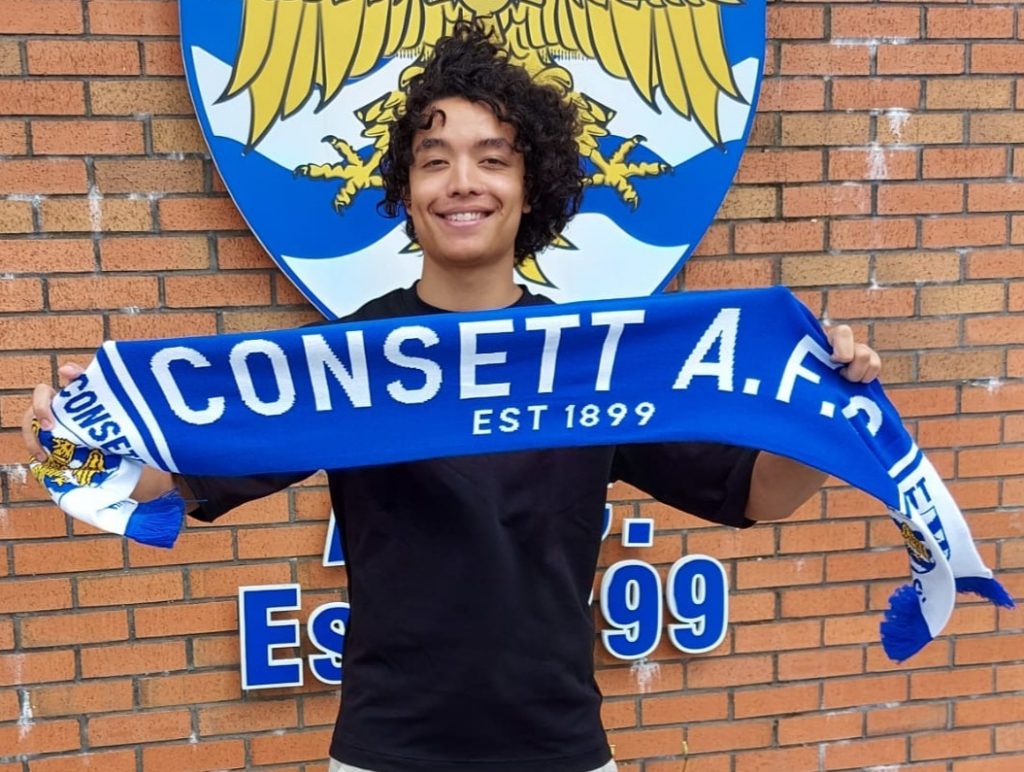 Pacy attacker Cyril Giraud has today agreed terms to become Consett’s fifth signing of the summer, ahead of our Northern Premier League bow.

The Frenchman will join his new teammates for training this week as they report back for their first session since their play-off success over Histon on 30 April.

Cyril, 21, started his career with Châteauroux in the French third division before being released.

He signed for Newcastle Benfield in July 2019 after scoring a hat-trick for them while on trial, and spent the next two years with the Lions.

Despite attracting interest from professional clubs, he moved to fellow Northern League 1st Division club Thornaby in October 2021, and became a vital cog in the team which finished third in the league.

He caught the eye in two games against the Steelmen, scoring Benfield’s second goal in our 4-2 win at Sam Smith’s Park in September, and then grabbing Thornaby’s goal when we drew 1-1 in the FA Vase in November, before prevailing on penalties.

Now he joins fellow new signings Zak Atkinson, Callum Elliott, Declan Bisset and Adam Mitchell in our squad as we prepare to play at the highest level at which the club has ever competed.

Consett manager Andy Coyles said: “We’re delighted to secure the services of Cyril. He’s been in high demand over the course of the off-season by a number of clubs in the North East, and understandably so.

“He’s a talent, he’s got fantastic skill sets both in and out of possession, he’s a fantastic character to have in the changing room, and his level of professionalism will hopefully set standards across the board.

“His ambitions are incredibly high, but they match his quality as a footballer. He is incredibly hungry, fit energetic and highly skilled.

“He did well against us last season for Thornaby, and I’ve seen him a number of times against other teams, and we are looking forward to him delivering in a Consett shirt.

“I know he’s going to be a fans’ favourite, and hopefully the little French magician will hopefully hit the ground running coming 2 July. We look forward to everybody seeing just how good a talent Cyril actually is.”