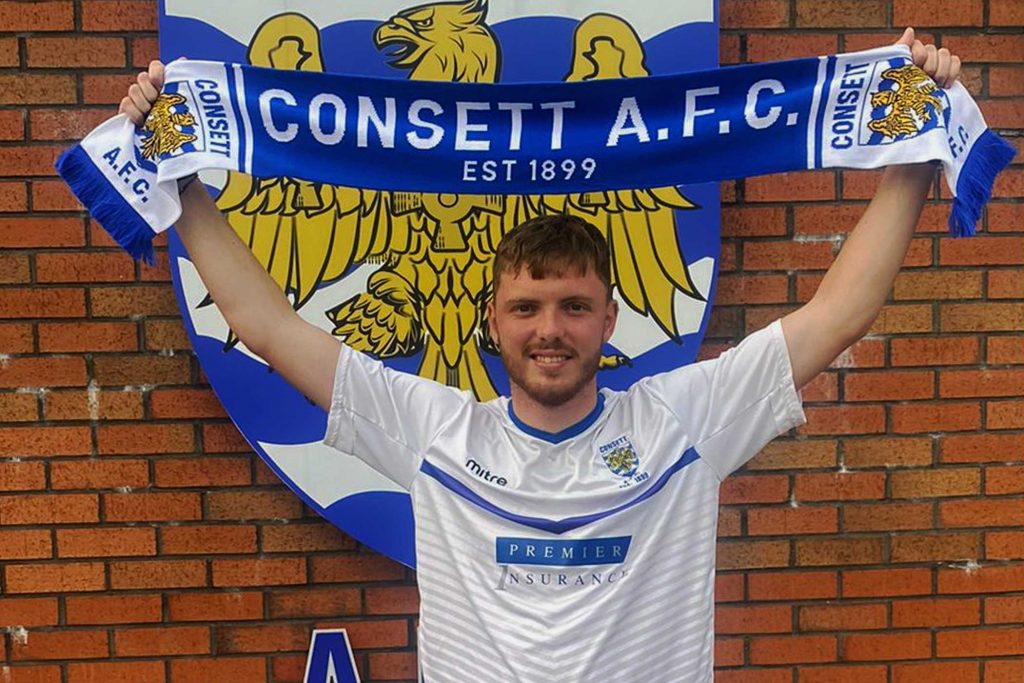 Consett have made Kieren Aplin, a versatile left-footer who was recently released by Gateshead, their sixth signing of a busy summer.

The 22-year-old has agreed terms to become a Steelman as we prepare to step up to the Pitching In Northern Premier League for the first time in our history.

Gateshead-born Kieren spent several years at the Newcastle United Academy, where he was a regular in the U18s Premier League, and also played in the FA Youth Cup.

After his two-year scholarship came to an end in July 2018 he spent the following season at North Shields, where he had come up through the junior ranks.

He actually signed for Consett in July 2020 and completed pre-season at Belle View, but left for National League side Gateshead on 15 September 2020 without making a competitive appearance for us.

He made his first-team debut for Gateshead in the FA Trophy v Farsley Celtic before the season was curtailed, but it turned out to be his one and only appearance.

Kieren re-signed with the Heed for 2021-22, but was loaned out to Hebburn Town and spent the season in the Northern Premier League side Hebburn Town. He was released by Gateshead in June.

Andy said: “Kieren is a player who was on our radar as soon as he became available, having been released from Gateshead.

“He did a pre-season with us prior to signing for Gateshead and he stood out for a number of reasons: he’s a fantastic footballer, with incredible technical ability.

“He’s a left-sided player who can play centre-half, left-back, left midfield and left wide forward. It shows that he’s versatile, as there’s not many players out there who can play in so many positions but be so effective.

“He’s a young lad, but he’s got a mature head on his shoulders. He’ll be another good character to have in the changing room, and that’s a common theme when we’re signing these new players.

“They’re not just wanting to go out there and win games for the football club, they’re also going to be very good in the changing room, and there is going to be that element of togetherness – something I thought was certainly lacking last season.

“We’re delighted to get Kieren over the line and I’m sure he’s raring to go. Hopefully he can help the lads enjoy a successful first year in the Northern Premier League.”