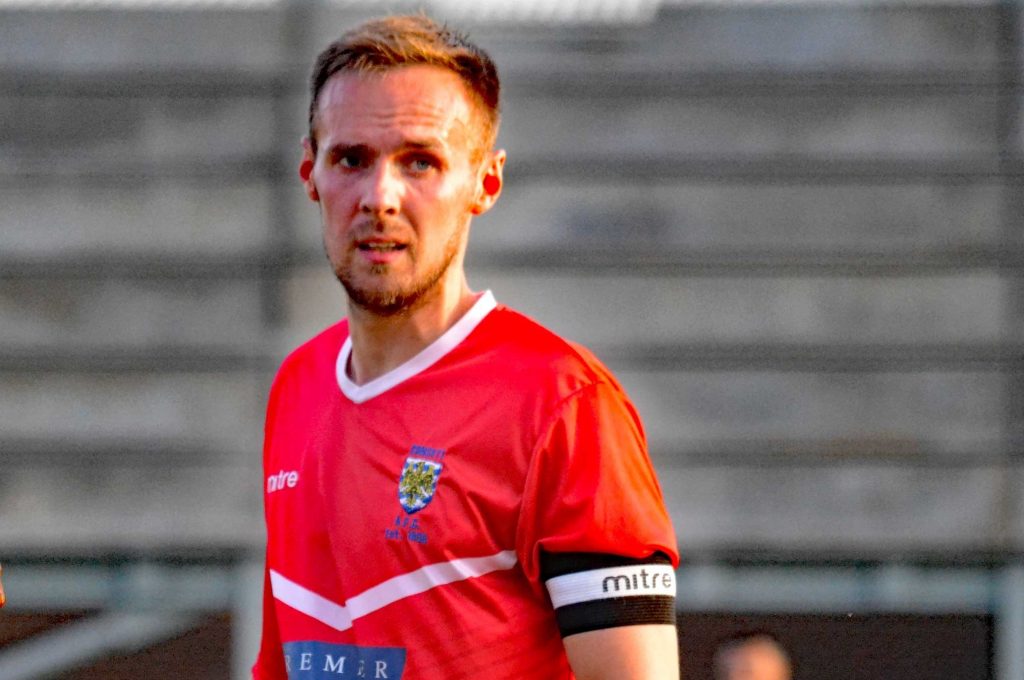 Popular midfielder Matty Slocombe has pledged his future to Consett AFC by signing a new contract – and has been made vice-captain as the club prepares to step up to the Northern Premier League.

The 28-year-old, who is closing in on 400 games for the club, succeeds Luke Carr, whose four-year stint at Belle View came to an end in the summer.

Arjun Purewal will continue as club captain, with Matty taking the armband when he’s not available. Matty has also agreed a new long-term contract with the club, which he joined as an 18-year-old.

Manager Andy Coyles said he appointed Matty after being impressed with his leadership qualities and selfless team ethic last season.

“He’s one of our senior players, and he’s been fantastic for me. The game against Wythenshawe in the FA Vase, which we lost after Matty was sent off, was a turning point, or rather his reaction to it was.

“He could have gone down the road of feeling sorry for himself, but he felt he’d let everyone down and responded in a positive manner.

“He’s had more cards than Clintons, which is something we’ve spoken about, urging him to channel his aggression in a different way, and he definitely learned from the Wythenshawe game.

“Being successful in the Northern Premier League won’t just be about your ability and technical skills, as we have plenty of that, but about the sort of characters you have in your team, and Matty is one of ours.

“In the play-off at Histon he was immense, playing out of position at centre half, and he’s a fantastic character to have in the dressing room.

“His attitude in training and games is exactly what we want as we try to improve the togetherness of the squad.

“We looked at Matty’s loyalty to the club, and the fact that when you talk to him it’s not about money, it’s about the club, its progression and development and its ambitions.

“Arj is our club captain, and a very good one, but he’ll miss the start of the season, so Matty will be leading the team in pre-season and for a while after that.”

Matty joined Consett in 2012, and has made 381 appearances for the club, scoring 23 goals.

He has been Players’ Player of the Year twice, was a Durham Challenge Cup winner in 2018, and many people’s man of the match in our delayed 2020 FA Vase final.