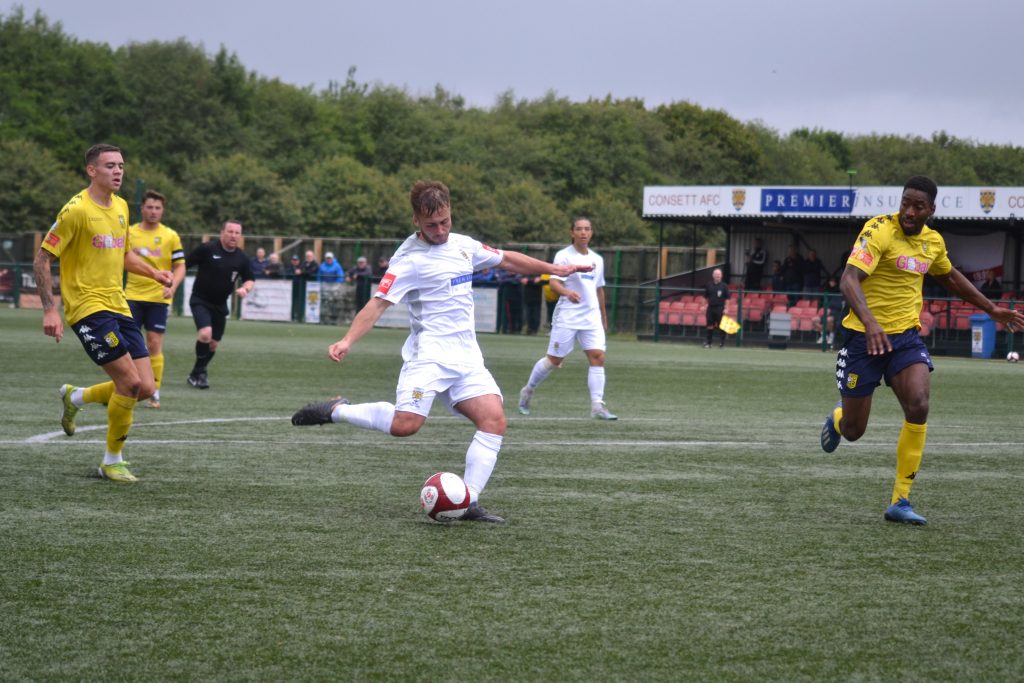 Consett are up and running in the Northern Premier League after a hard-fought 2-1 win over Tadcaster Albion at Belle View Stadium today.

After picking up their first point in the 0-0 draw with North Shields in midweek, expectations were high for a first win for the Steelmen since they were promoted.

And they didn’t disappoint, with two first-half goals enough to clinch a very welcome three points.

Kieren Aplin gave the home side the lead in the 10th minute, beating his man with a nice bit of skill and planting the ball in the bottom corner from 22 yards out.

It should have been two on the half-hour when the visiting keeper dropped a cross under pressure from Aplin and it fell to Zak Atkinson, but his shot from close range ended up in the side netting.

On 34 minutes Consett went even closer when, after a bit of pinball from a corner, Calvin Smith’s shot was cleared off the line by Visiting No 9 Brett Agnew.

But they deservedly went into the break with a two-goal lead when Jake Orrell fired home in the 44th minute, pictured top, after playing a great one-two with Aplin.

The visitors reduced the arrears within two minutes of the restart, as skipper Cody Cromack caught Consett napping at the start of the half.

Substitute Dan Marriott had a chance to seal the win in the first of four added minutes, but dragged his shot wide under pressure from a defender.

It mattered not, as the Consett defence held firm to pick up the first win at the new level.