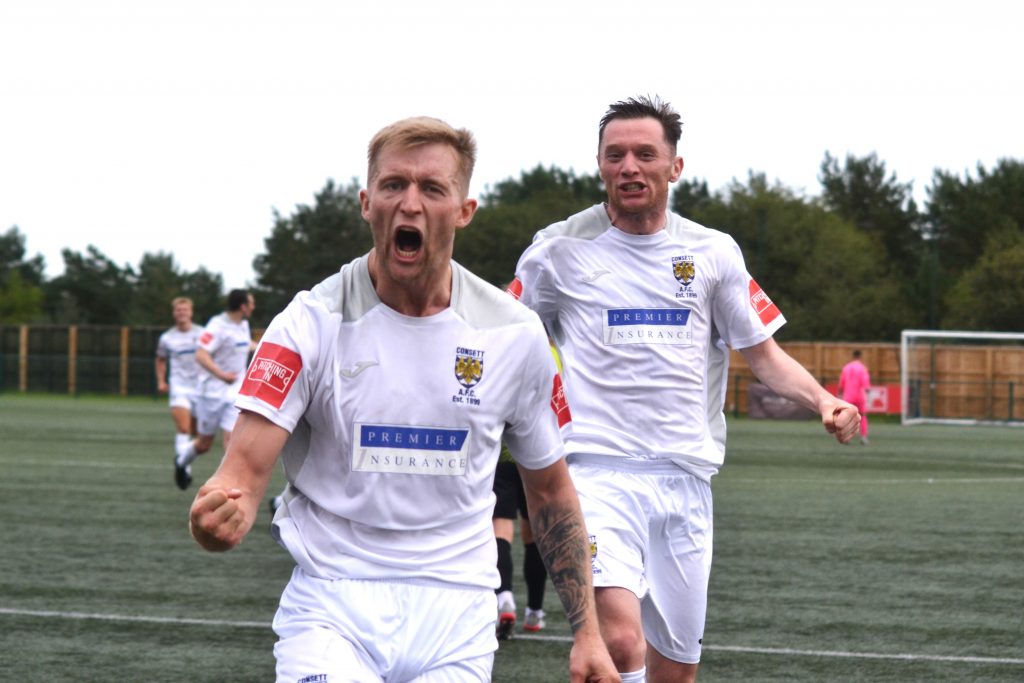 Consett recorded an excellent Northern Premier League win today against Carlton Town, who headed home from Belle View Stadium on the wrong end of a 5-0 drubbing.

The visitors from Nottinghamshire finished sixth in the NPL Division One Midlands last season before being switched by the FA to the East division in the summer.

They must have wished they’d stayed there after coming up against a Consett team who are really starting to find their feet in their new surroundings.

Lewis Green set the Steelmen on their way in the 20th with a crisp volleyed finish, pictured below, from Darren Holden’s left-wing cross.

On 26 minutes the lead was doubled when Karl Byrne ‘s pass sent Kieren Aplin running through, and despite the attentions of a defender he finished from 15 yards to make it 2-0, pictured below.

Consett keeper Ross Coombe made an important save in the 57th minute, to deny visiting skipper Nathan Watson and deny the Millers a lifeline back into the game.

Four minutes later the points were as good as Consett’s when Carlton left-back Niall Hylton handled on the goal-line and was shown a straight red card.

The penalty was neatly tucked away by striker Zak Atkinson, pictured below, who again led the line superbly, never giving the visiting defence a moment’s rest.

Most teams would have been happy with three, but not this Consett side. On 88 minutes Declan Bisset scored his first goal for the club to make it 4-0, with a neat finish, pictured below, from sub Dan Marriott’s pass.

And in the last minute of stoppage time the outstanding Lewis Green made it 5-0, slotting home a precision finish into the bottom corner, pictured below, from another Marriott set up.

It was an excellent win, which could have been even more emphatic, and made it four games without defeat in the Northern premier league.

Next up for Consett is a tasty Bank Holiday Monday trip to our old Northern League friends and rivals Dunston. Kick off at the UTS Stadium is 3pm.