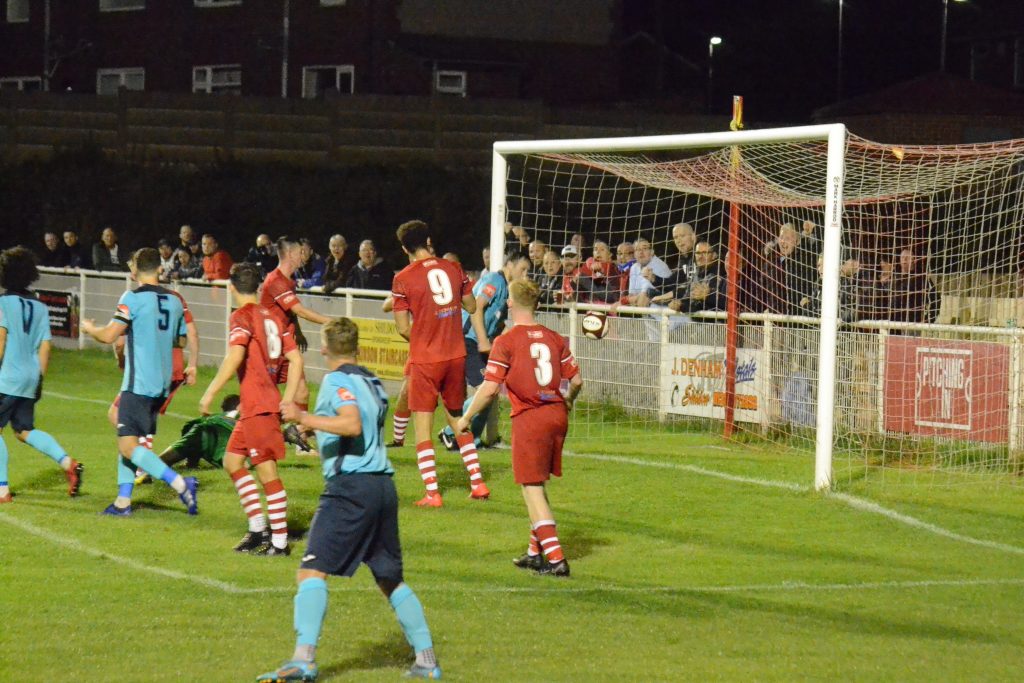 Consett picked up their first three points on their travels since joining the Northern Premier League tonight when they won 3-1 at Shildon.

Dean Street was seldom a happy hunting ground for the Steelmen when we were Northern League rivals with the Railwaymen – but they fully deserved the points after a fine performance.

Darren Holden got Consett off to a perfect start, giving them the lead after just five minutes, smashing a shot in off the bar from Cyril Giraud’s pass.

On 10 minutes it could have been 2-0, but Shildon keeper Matthew Bateman pulled off a great save to deny Jake Orrell after a poor defensive header landed at his feet.

On 27 minutes Consett did double their lead when a corner was half-cleared to Orrell, whose cross found Dan Capewell, who glanced in a header at the back post.

The visitors were rampant, and Zak Atkinson was inches away from getting on the end of a cross to the back post, while Lewis Green saw a shot deflected just wide after good work by Giraud.

It was the 37th minute before Shildon troubled the Consett goal, and when they did keeper Mark Foden made a good low save to deny Jon Weirs.

But it was the visitors who came closest to adding to the scoreline when Capewell bulleted a header goalwards from a right-wing corner, but Bateman made a good reaction save on the line.

It remained 2-0 at half-time, and Consett picked up in the second half where they had left off, with great play between Karl Byrne and Colin Larkin – making his first appearance of the season – setting up Orrell, whose shot was blocked.

Atkinson was inches away from connecting with a spectacular diving header, and on 54 minutes Consett could have been out of sight when Byrne’s beautiful lofted pass sent Giraud through, but he fired narrowly wide.

Shildon received a lifeline on 72 minutes when they were awarded a penalty for a Capewell foul on sub Wilson Kneeshaw, but Foden made a fine save, diving low to his left.

On 79 minutes the home side did find a way back into the game when right-back Joe Posthill saw his initial shot well saved by Foden, but followed in to score from the rebound and make it 2-1.

A minute later Consett had a chance to restore their two-goal lead when Orrell’s pass found Larkin a few yards out, but he didn’t connect properly and a defender got back to clear the ball off the line.

But they were in no mood to let this game slip, and secured the points in the 87th minute when Darren Holden’s left-wing corner seemed to be punched into his own goal by keeper Matthew Bateman, with Dan Capewell following in to make sure, pictured top.

When the final whistle went it was a well-earned three points for Consett, who controlled the game from start to finish, and could and perhaps should have won even more convincingly.

The healthy travelling contingent in the crowd of 326 would certainly settle for a repeat performance on Saturday, when the sides meet again at Dean Street in the FA Trophy, kick off 3pm.