Consett’s first foray into Northern Premier League football ended in agonising fashion, as they went down to an injury-time goal in a 2-1 defeat against Cleethorpes Town on a scorching hot day in Lincolnshire.

Manager Andy Coyles was again denied the services of a number of players, through a combination of illness and injury, although he was able to welcome back Lewis Green and Darren Holden, while Ross Coombe replaced Mark Foden in goal.

Cleethorpes came into the game as one of the promotion favourites, having finished third in the league last season before losing in the play-offs to Stockton Town. 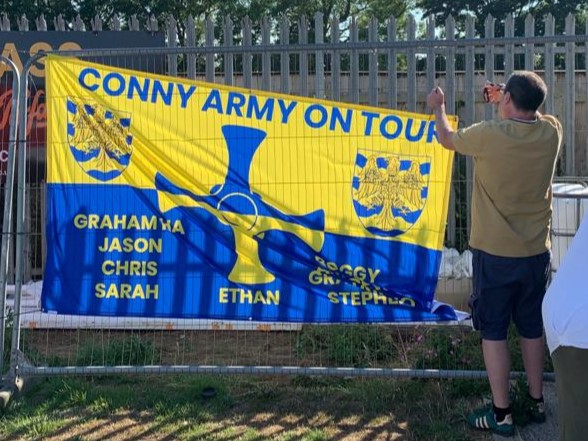 As might be expected, it was the home side that started on the front foot and the game was only five minutes old when they almost took the lead as midfielder Sam Topliss sent a 20-yard half volley narrowly over the bar.

The pressure continued and in the 9th minute Coombe was called into action for the first time as Jack McMenemy twisted and turned into the penalty area, only to see his low effort blocked by the Consett keeper.

Better was to come from Coombe in the 12th minute as Coombe, pictured below, had to go full stretch to palm away a curling effort from Declan Howe which was heading for the top corner. 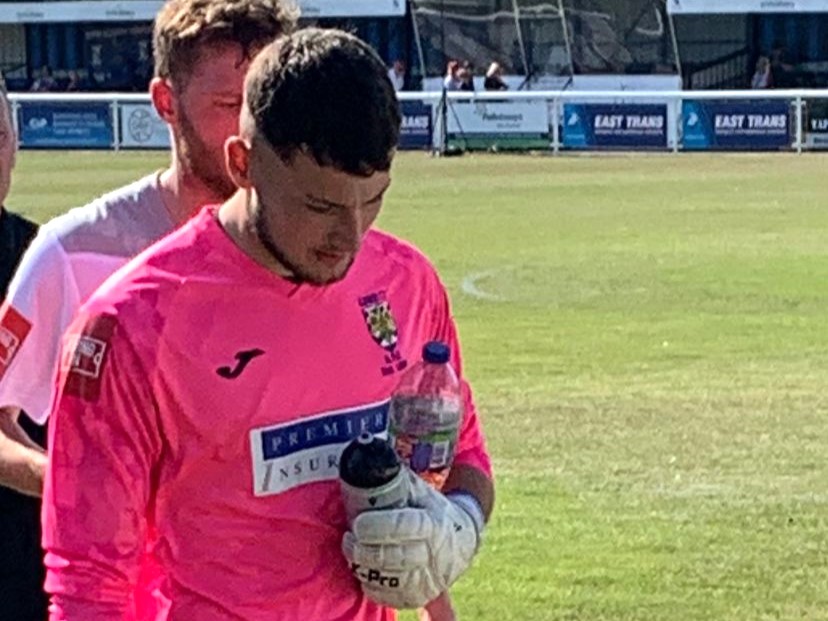 The pressure finally paid off as Cleethorpes took the lead on 14 minutes as a deep corner found centre back Jordan Cooke only a few yards out and he had a fairly simple task to nod home.

At this stage, it looked as though Consett might get overrun, but they managed to steady the ship and gradually grew into the game, largely due to some battling hold-up play from Zak Atkinson which allowed his colleagues to get up the pitch a bit more.

The Steelmen were given a golden chance to equalise on 22 minutes as the referee pointed to the penalty spot following a corner.

It wasn’t initially clear what the offence was, although a defender holding Ben Milburn seemed the most likely. Regardless, Zak Atkinson held his nerve and calmly dispatched the penalty into the bottom corner.

Cleethorpes were straight back on the front foot and only a minute after the equaliser, Coombe made his third good save as he again denied Howe, who had burst through on goal.

The visitors had another set-piece warning after half an hour as goalscorer Cooke again found himself well placed from a corner, but this time he sent his header over the bar.

That was it for the first half goalmouth action, as although Consett were making inroads down both flanks, especially through their full-backs, they couldn’t quite fashion a chance of note.

As the second half began, it was quite the opposite of the first as it was the visitors who were enjoying the bulk of possession, but again they struggled to create any clear cut chances.

Kieren Aplin had a speculative effort from his own half on 49 minutes as he spotted the keeper off his line, while on 51 minutes Karl Byrne went on a trademark run down the right, cutting inside his man onto his left foot, only to send his effort high and wide.

From the hour mark onwards, the game became something of a stalemate, with neither side looking like troubling the scoreboard.

There was a let-off on 67 minutes as dangerman Howe broke through the Consett back line and beat Coombe, only to be denied by an offside flag.

Thirteen minutes from time, Howe looked like he would go clean through again, but he was denied by a superb sliding tackle from Ben Milburn. It was a tackle that had to be perfect, as the young defender was the last man and already on a yellow card for an earlier foul on the same player. 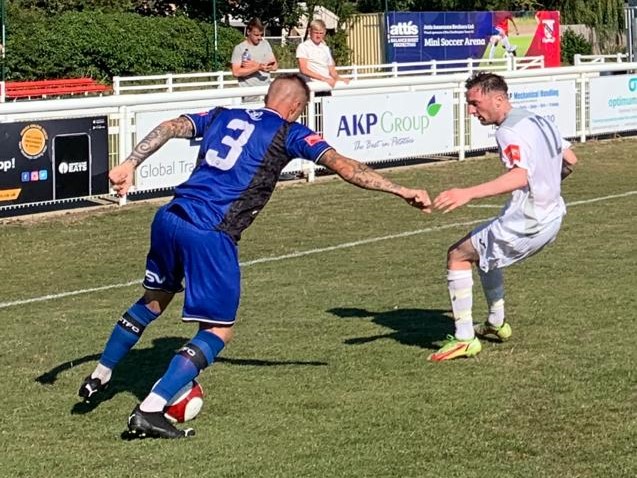 Going into the final 10 minutes Cleethorpes started applying pressure, but Consett defended with great discipline and resolve, and looked to be heading for what would have been a fantastic point until disaster struck in the first minute of injury time.

A left-wing corner was nodded down at the far post, and following a bit of a scramble it was Declan Howe who was on hand to poke home from close range.

A few minutes of added time remained but Consett were unable to fashion a chance for an equaliser, and despite a fantastic, hard working performance returned to the North East empty-handed.

However, despite the defeat there was cautious optimism that a good season could lie ahead if this level of effort and commitment can be maintained, along with some key players returning.