Consett picked up their first away point in the Northern Premier League after surviving a 90-minute aerial bombardment at Pontefract.

In a hard-fought game featuring eight cautions, Jake Orrell gave Consett the lead with his second goal in four days midway through the first half.

The Steelmen defended for their lives, but the home side’s incessant long-ball tactics eventually paid off when Adam Priestley levelled in the 69th minute.

Manager Andy Coyles made two changes to the side which beat Tadcaster at the weekend, with Darren Holden returning at left-back and Mark McLeod making his full debut in midfield. Cyril Giraud and Lewis Green dropped to the bench.

As soon as Pontefract got a throw-in, their main tactic became apparent; huge missiles launched deep into the penalty area by their skipper, right-back Jack Greenhough.

The home side put Consett under intense pressure from the start, and the game was only a minute old when they appealed for a penalty for a Dan Capewell tackle on Mikey Dunn, pictured below, but the referee was having none of it. 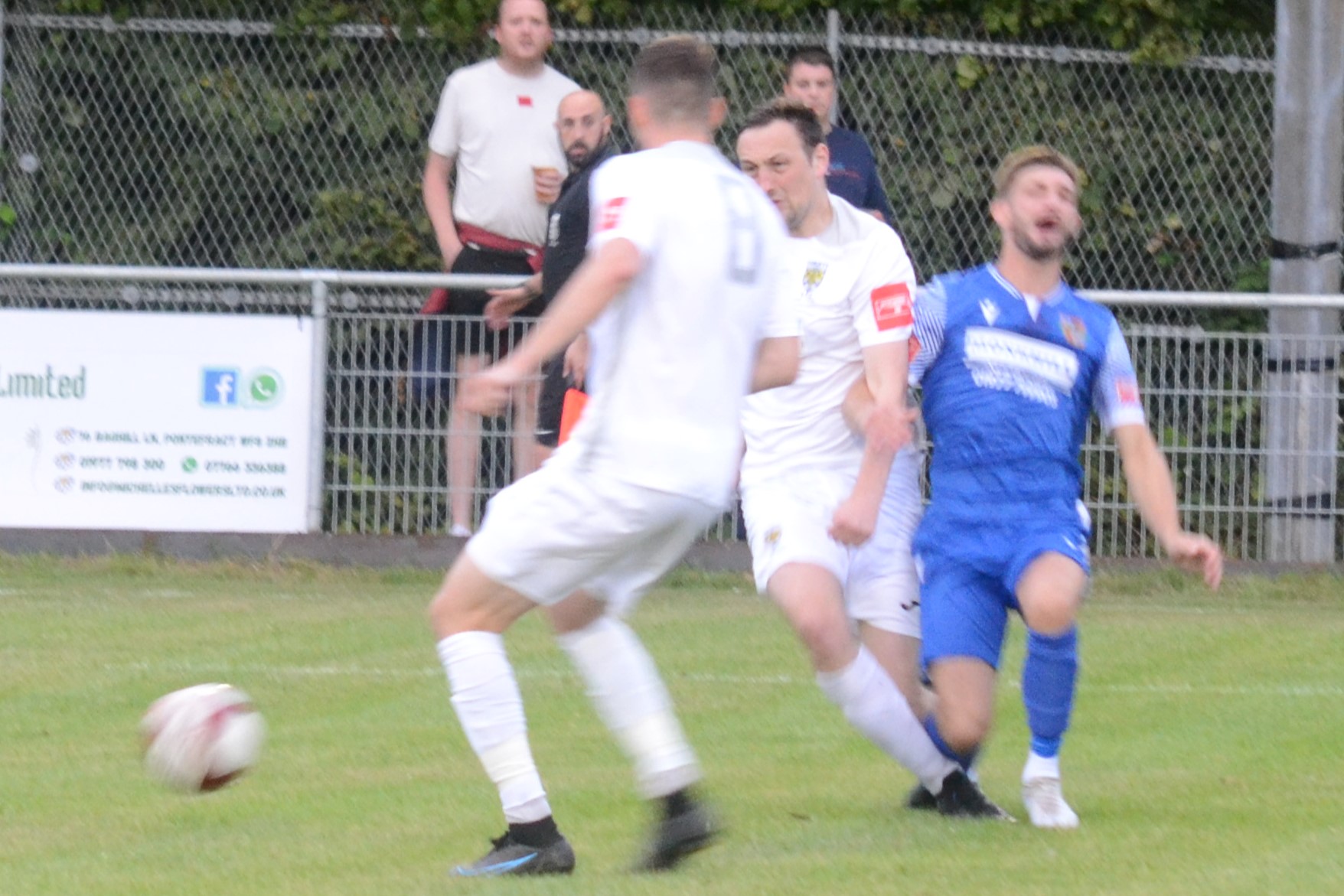 In the fourth minute they carved out the first chance of the game when a deep cross by Greenhough found Gavin Allott at the back post, but the big striker headed into the side netting. Then on eight minutes Consett keeper Ross Coombe made the first in a string of good saves when he parried away Jack Vann’s 25-yard free-kick.

Consett had their first chance on nine minutes and should have taken the lead when Zak Atkinson was played in on goal by Kieren Aplin’s flick, but saw his shot saved by Lloyd Allinson. The ball rebounded back to the No 9, but his follow-up was also saved by the keeper and a defender completed the clearance.

On 12 minutes Coombe made a fine save from Jimmy Williams, sticking out a leg to boot away his well-struck 25-yarder. The offside flag meant it wouldn’t have stood anyway, but the Consett keeper couldn’t have known that.

A minute later Consett had the ball in the Pontefract net when Atkinson headed home from Kieren Aplin’s left-wing cross, but the ‘goal’ was ruled out for offside.

On 22 minutes the Steelmen took the lead with a fine move. Karl Byrne went on a meandering crossfield run from the right and played the ball into the channel for Holden. His cross found Jake Orrell coming in at the back post, and the midfielder finished first time past Lloyd Allinson to make it 1-0, pictured top.

On the half hour Consett had a narrow escape as James Baxendale hit a cross-shot against the bar, and there was an even closer call when the ball seemed to hit skipper Matty Slocombe’s arm as he slid in to block a shot, but again the referee was unmoved.

Eight minutes before the break Coombe made his best save yet, diving to his left to claw away Gavin Allott’s header, pictured below, which looked a goal all the way. It helped Consett reached the interval with their lead intact. 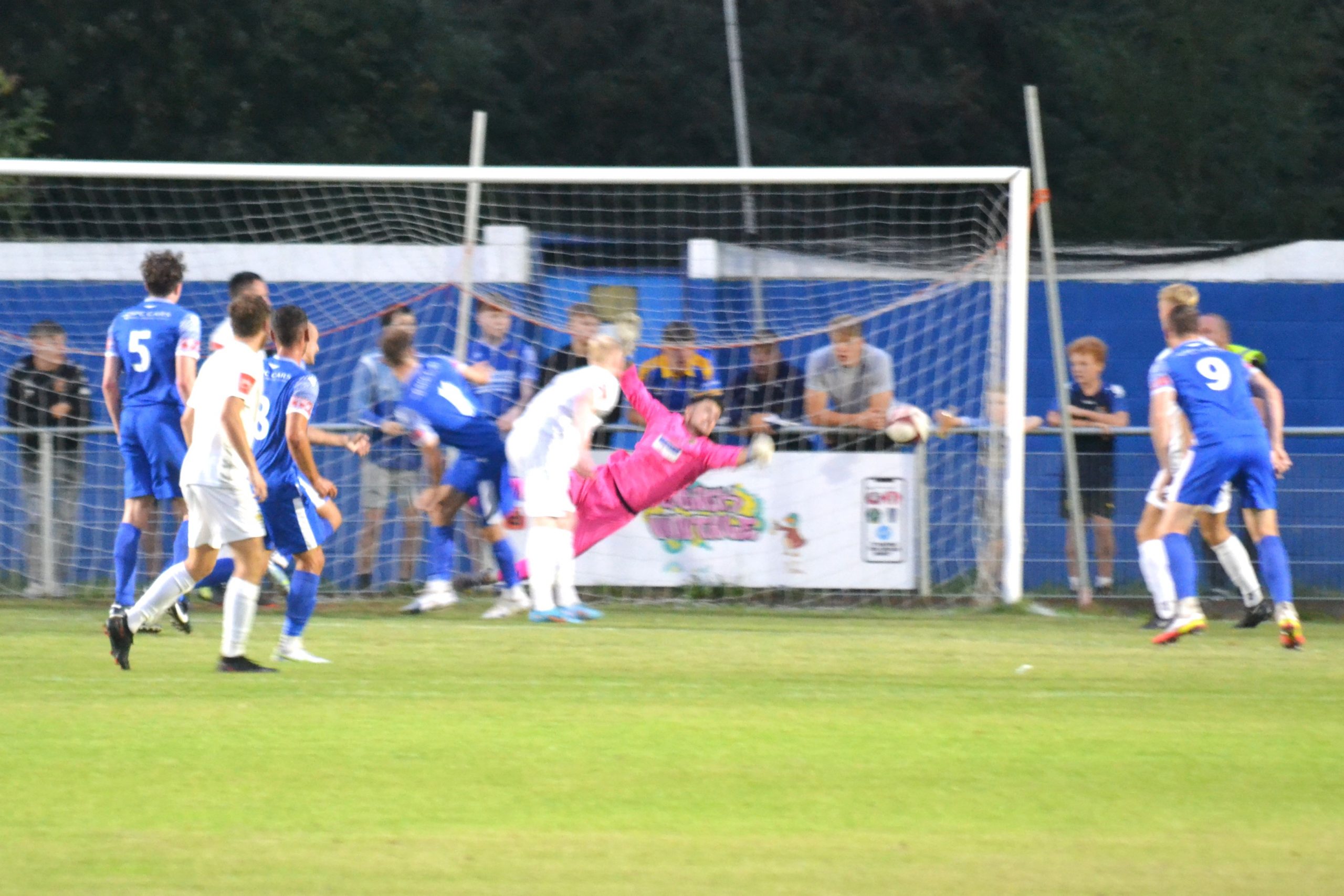 Two minutes into the second half Coombe made another good stop, saving with his feet at his near post from Adam Priestley, and six minutes later he made an almost identical stop from Allott.

Pontefract were still enjoying most of the possession, but Consett looked dangerous on the break, and were unlucky not to double their lead in the 61st minute when Aplin’s well-struck effort brought a good save from Allinson. 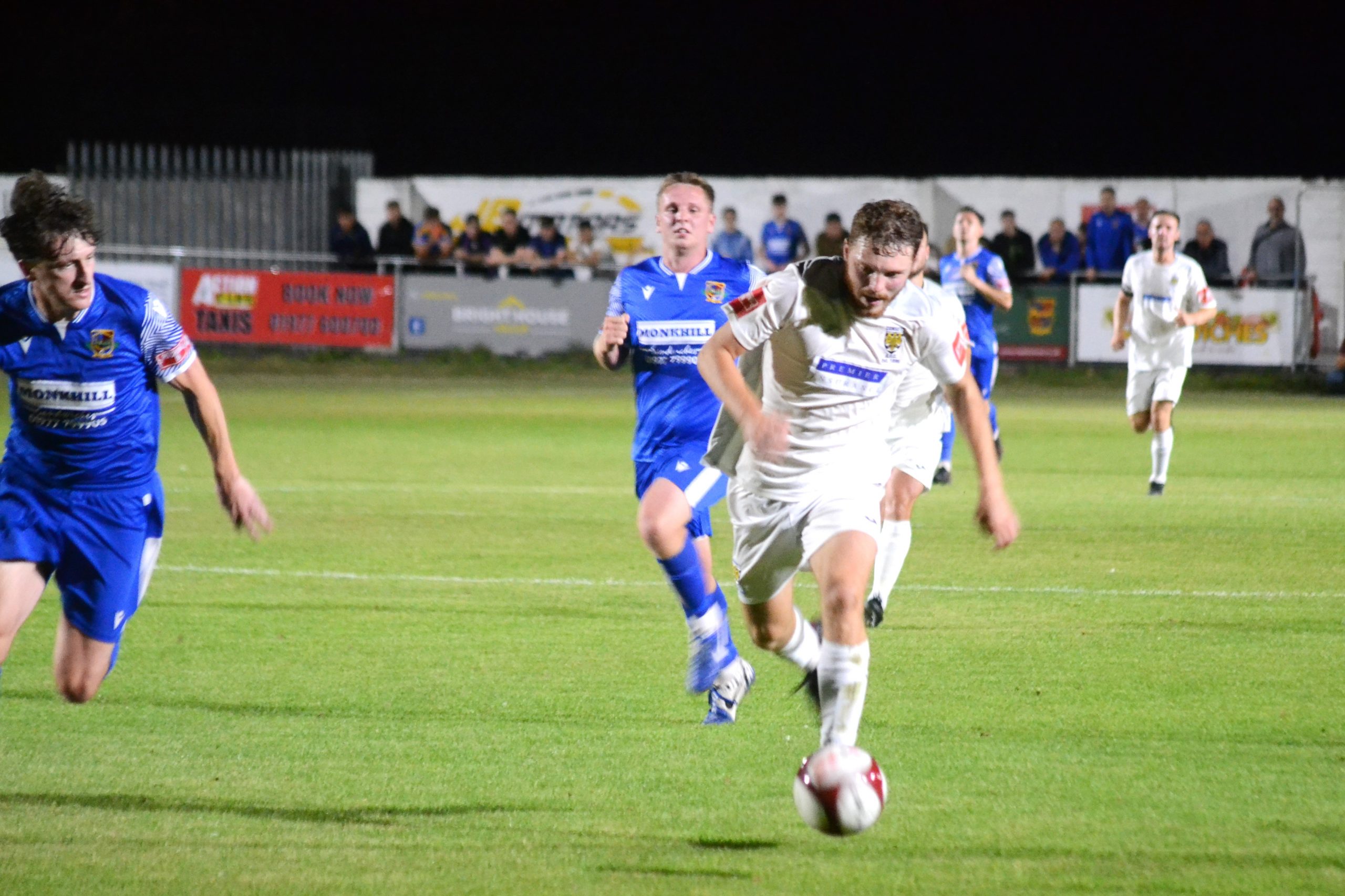 The bombardment continued, but Consett’s defence stood firm, until the 69th minute, when Capewell, who’s been magnificent all night, missed a long punt downfield from the keeper. Allott flicked on and Adam Priestley ran through and scored on the half-volley to make it 1-1.

Ten minutes later Priestley could have given Colls the lead, but got his bearings all wrong and somehow sent a close-range header wide.

In previous seasons Consett might have crumbled under the sort of pressure they faced here, but this side is made of sterner stuff, and when the final whistle blew they had earned a very good away point.
MATCH REPORT & PICTURES: GARY WELFORD