Severely depleted Consett came close to ending their 13-game winless run but had to settle for a point after conceding a late goal in a 2-2 draw at Grimsby Borough.

The Steelmen were without nine players for a variety of reasons for their first-ever visit to the Bradley Football Development Centre, but put in a battling performance and came close to claiming three points for the first time since mid-September.

Manager Tony Fawcett made five changes to the side which lost at home to Brighouse Town the previous weekend. Kieren Aplin and Dan Capewell returned from suspension, Calvin Smith came back from injury, and there were starts for Lewis Green and Scott Fenwick.

But Matty Slocombe was suspended after reaching five yellow cards in the league, and the manager was also without the services of the injured Josh Baggs and Mark Foden and the unavailable Cyril Giraud and Zak Atkinson.

After losing their first six games of the campaign, Grimsby Borough – who were Northern Counties East League champions last season – were unbeaten in their last seven games, but the early exchanges were fairly even.

Home midfielder Reece York had the game’s first attempt on goal on 19 minutes, but scuffed his shot wide, and Declan Bisset did the same at the other end eight minutes later after a neat one-two with Aplin.

On 41 minutes Consett had their best chance of the half when Jake Orrell’s cross from the right found Charlie Exley at the back post, but keeper Liam Higton saved his close-range header and then claimed the loose ball.

It was Orrell’s last involvement in the game, as a minute later he limped off with a suspected hamstring injury, to be replaced by Adam Mitchell.

A minute after that, the home side took the lead when Adam Drury played in right-back Tom Sawyer, who got to the byline and pulled it back across the six-yard box for George Horrocks to fire home at the back post .

They almost doubled their lead right at the end of the half when Drury tested Ross Coombe with a low drive from the edge of the area, but the Consett keeper made a good save.

Consett came out with more purpose for the second half, and had a chance just three minutes in when Aplin’s looping header from Exley’s cross dropped just over the bar.

At the other end York had another chance after cutting in from the left but blazed his shot wide.

Consett deservedly levelled on 56 minutes when a long ball from Coombe was flicked on by Fenwick, and Kieren Aplin ran on to it and kept his nerve to finish to make it 1-1, pictured below. 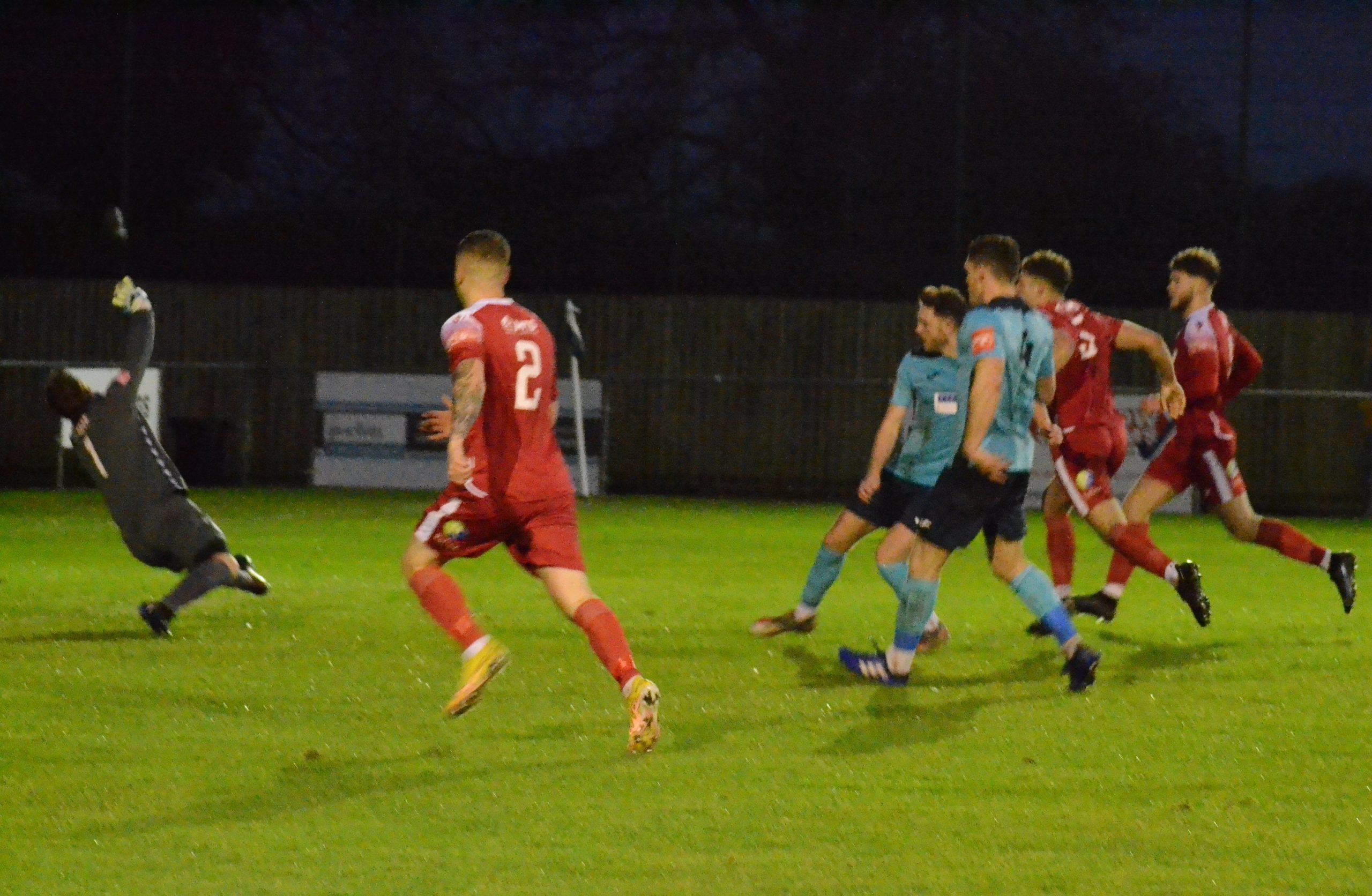 Five minutes later Consett appealed for a penalty when Smith appeared to be tripped in the box, but nothing was given, and it took an excellent tackle from Exley to deny Borough on the break.

On 63 minutes Consett had an excellent chance to take the lead when Smith’s through ball sent Aplin clear in a very similar chance to his goal, but this time home keeper stood up well to make a vital save.

The Steelmen continued to take the game to their hosts, and in the 72nd minute they did take the lead. Declan Bisset’s pass sent Scott Fenwick away down the left, and he outpaced and outmuscled his marker, pictured top, before firing past the keeper from an acute angle at the near post for his first goal for the club.

The lead lasted just five minutes, as the home side levelled through sub Edwin Essel, who netted at the back post from Drury’s cross.

Grimsby had more of the ball as the game entered its closing stages but Consett were still a threat on the break, and had two big chances to take all three points.

Bisset was inches away from scoring after a good move ended with Aplin playing him in, with his effort just clearing the crossbar. And in the last minute a Smith pass put Fenwick through, but this time Higton got a firm hand to his well-struck drive toensure it ended honours even.

It was a slightly disappointed Consett who trooped off in the pouring rain at the end of a hard-fought game, but they were more than worth the point which keeps them out of the danger zone.
MATCH REPORT & PICTURES: GARY WELFORD