Consett left it late but finally managed to grind out a win against a dogged Penrith side at Belle View Stadium.

Manager Terry Mitchell made two changes to the side which had beaten Bishop Auckland in midweek, with Darren Holden and Luke Carr replacing the injured Jermaine Metz and rested Lewis Green. Holden came in at left-back, with Nick Allen switching to the centre and Simon Jakab moving to right-back, while Lawson again started in midfield.

Consett dominated in terms of possession and chances right from the off, but the Cumbrians defended superbly until the very last kick, when their hosts got the bit of luck their display deserved.

It was a cagey first 20 minutes, with few opportunities of note created by either side. Dale Pearson fired over from a short corner routine, while Lawson found Calvin Smith with a great ball in, but the midfielder’s first shot was blocked and his follow-up trundled tamely to the keeper.

Midway through the half Ali Alshabeeb got to the byline and pulled the ball back for Orrell, whose effort was deflected behind by the sort of determined defending that would be a feature of penrith’s play.

The Steelmen took the lead in the 31st minute, when Pearson was fouled near the corner of the box. Orrell floated in the free-kick, and centre-back Ross Wilkinson was there to guide home a header, pictured below, for his third goal of the season. 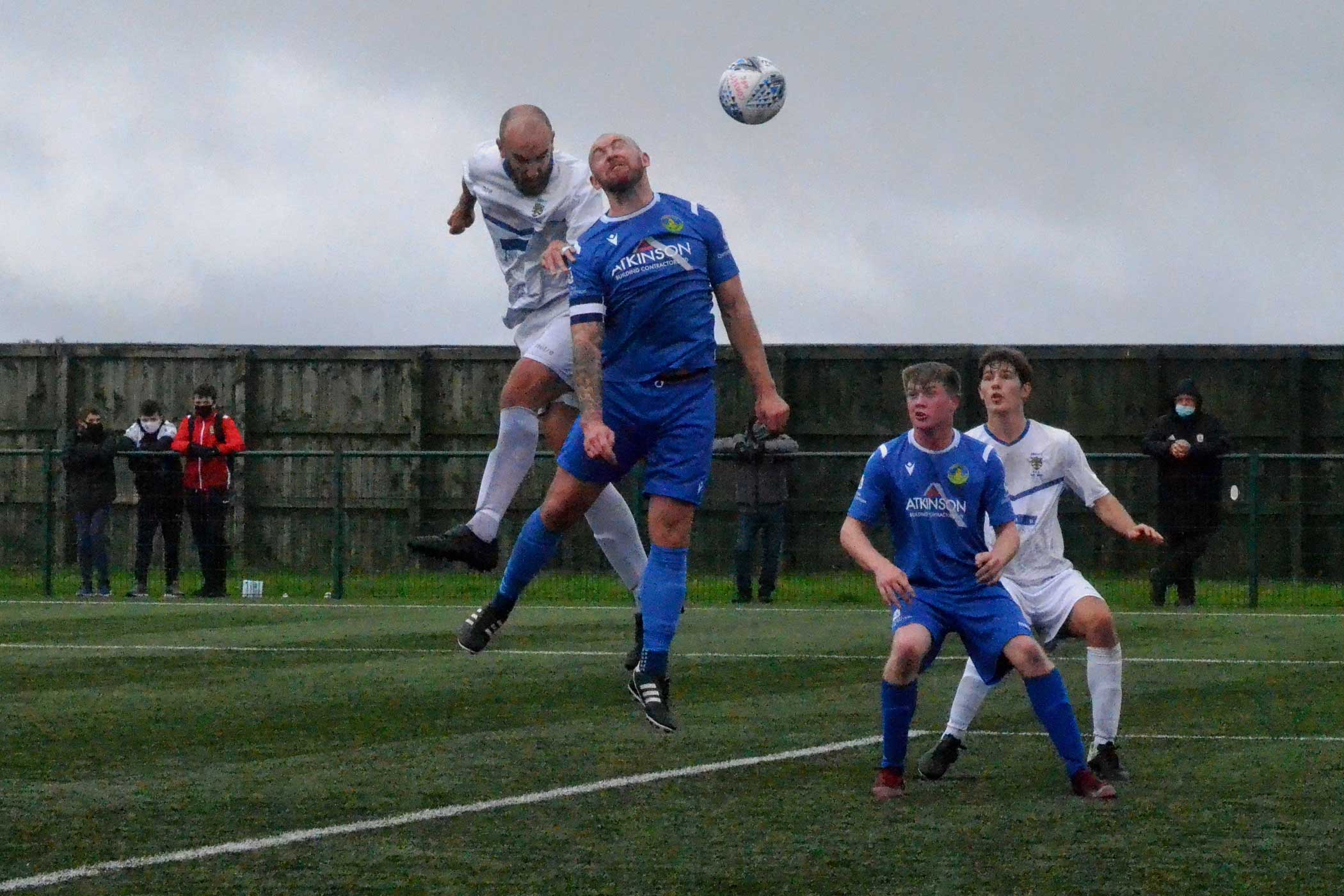 The lead lasted just two minutes as Penrith responded well, scoring from their first clear-cut chance. Max Brown broke down the right, fired the ball across and Mikey Williamson poked it home at the second attempt after his first was blocked.

Lawson did well to make space for a shot, but saw his effort deflected wide, then Alshabeeb set up Wilkinson for another header, but this time he couldn’t direct it away from the keeper, who made a routine save.

It was to be Wilkinson’s last involvement in the game, as he picked up a knock which saw him replaced by skipper Arjun Purewal at the break. The change made no difference to the flow of the game, and Consett remained in the ascendancy, with their visitors content to soak up pressure and play on the break.

Smith fired an early chance over from 25 yards, while Purewal climbed highest to meet Carr’s cross, but couldn’t get any power behind his header. Consett were laying siege to the Penrith goal, but the Bonny Blues were defending superbly, and got a touch of luck when they needed it.

On 54 minutes a great cross from Lawson on the right saw Penrith keeper Luke Miller tip Alshabeeb’s close-range header onto the bar, and then save Pearson’s follow-up on the line.

Matty Cornish replaced Alshabeeb in the 58th minute, and Consett immediately looked more threatening, even when they lost Pearson for 10 minutes after he was sent to the sin bin for dissent. The No. 9 went down looking for a penalty, pushed a defender over from behind when it wasn’t given, then kicked the ball away.

Miller saved Cornish’s shot with his outstretched leg after the forward went past two defenders, read Carr’s audacious attamepted lob from inside the centre circle, and then palmed over Darren Holden’s well-struck effort as Consett piled on the pressure.

Penrith reminded Consett that they still posed a threat on the break, as Dave Hewson’s pass found Max Brown, who turned his man but fired over the bar.

Cornish had two more attempts saved by the young keeper, Smith glanced a header over from a corner, Pearson blazed over the bar from Orrell’s cross, and then Miller made a brave stop at Pearson’s feet as Penrith defended for their lives.

Just when it seemed like Consett were going to have to settle for a point, the fourth minute of added time saw Jake Orrell swing over a corner from the left, and it missed everyone in the middle before bouncing up off the wet pitch, pictured top, and ending up in the top corner.