Consett had to settle for a point on their travels after a below-par performance saw them draw 1-1 at Billingham Town.

Manager Terry Mitchell made five changes to the team which won in the FA Vase at the weekend. Luke Carr and Nick Allen, who were unavailable, were replaced by Callum Guy and James Metcalfe, while Darren Holden came in at left-back for James Martin. In midfield, Calvin Smith and Matty Slocombe were rested, with Olly Scott and Dan Marriott stepping in.

The Steelmen were still without their two main strikers, with top scorer Dale Pearson serving the second match of his four-game suspension, and Stephen Callen joining centre-back Ross Wilkinson on the injured list.

Consett started the game strongly, and Ryan King almost opened the scoring after six minutes, but his first-time effort from Jake Orrell’s left-wing cross came back off the post, pictured below. 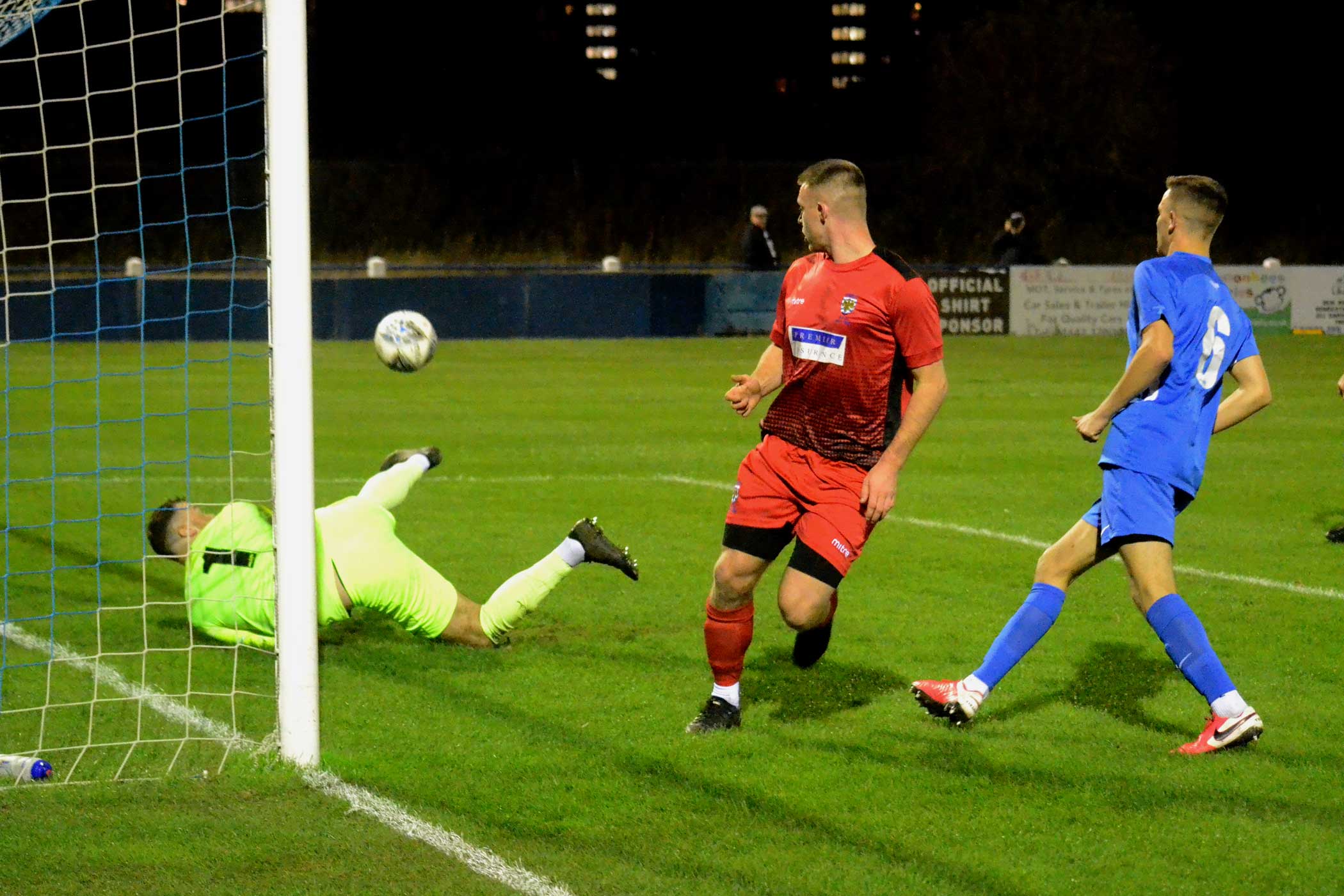 The Steelmen did take the lead on 10 minutes when another Orrell pass from the left found Colin Larkin 12 yards out. The veteran striker took three touches of the ball – the first to control it, the second to nudge it past his marker, and the third to drill it into the net to make it 1-0.

Consett were kicking into the teeth of a strong wind which ruined the game as a spectacle, and made good football almost impossible. Billingham, with the wind at their back, created a couple of half chances, but both were blazed over the bar.

The visitors were finding it difficult to create much, but they did have a half-chance of their own on 37 minutes when Guy’s cross from the left picked out King, but his shot was blocked by a defender, pictured below. 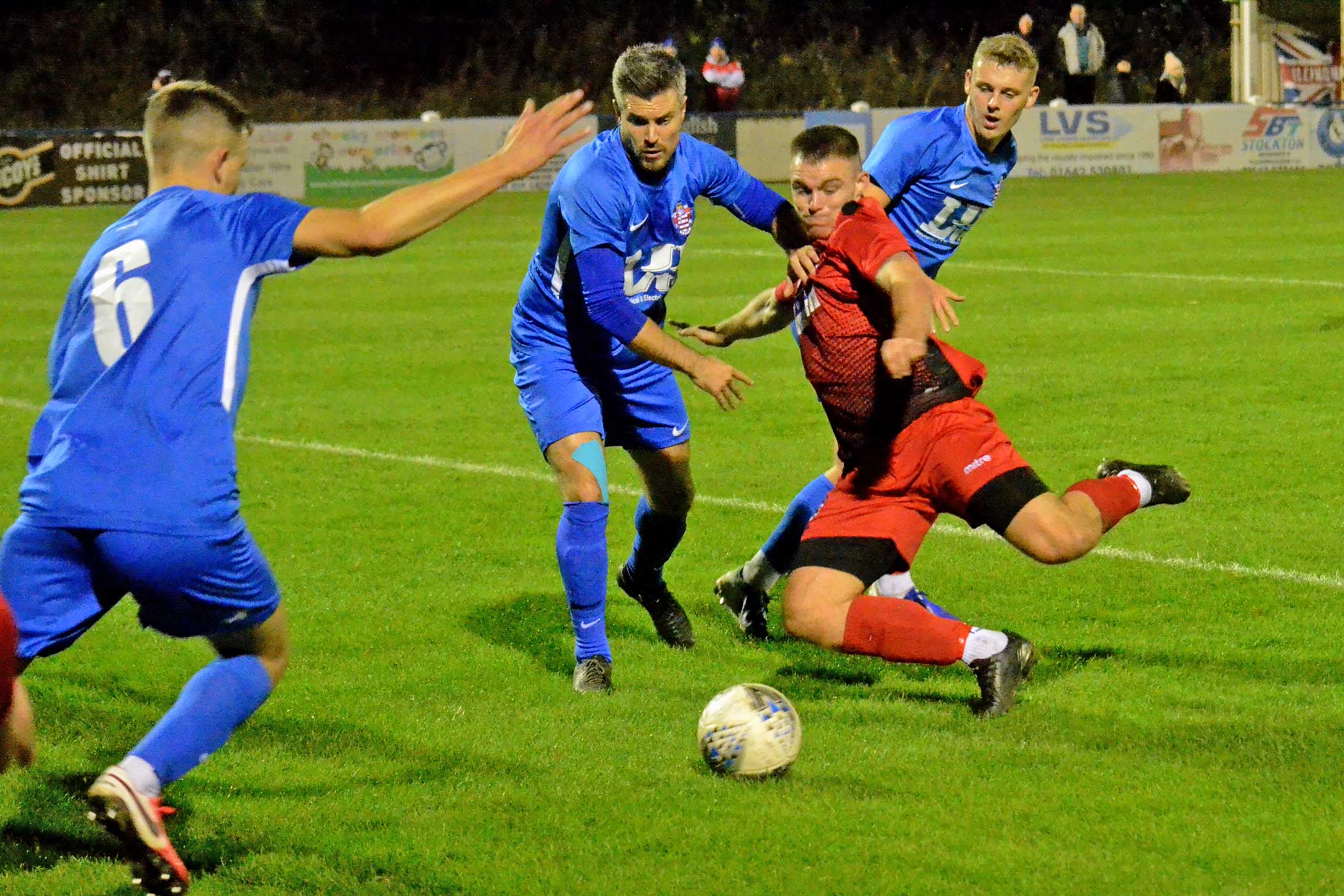 The Steelmen were made to pay for not building on their good start when the home side equalised in the 39th minute, Connor Rennison firing home the rebound after Kyle Hayes had saved Danny Earl’s shot.

If the travelling fans hoped playing with the wind behind their side would bring about a second-half improvement they were to be disappointed, and it was Billingham who adapted better to the conditions.

On 53 minutes Hayes made a good save with his legs after Consett got caught trying to play the ball out of defence, and seven minutes later he made a fine reaction save when the home side looked certain to score.

Consett brought on Carl Lawson for King and Smith for Guy in a bid to force a breakthrough, but Larkin still looked their most likely source of a goal, and Norton had to be off his line smartly to prevent him capitalising on Orrell’s through ball, pictured below. 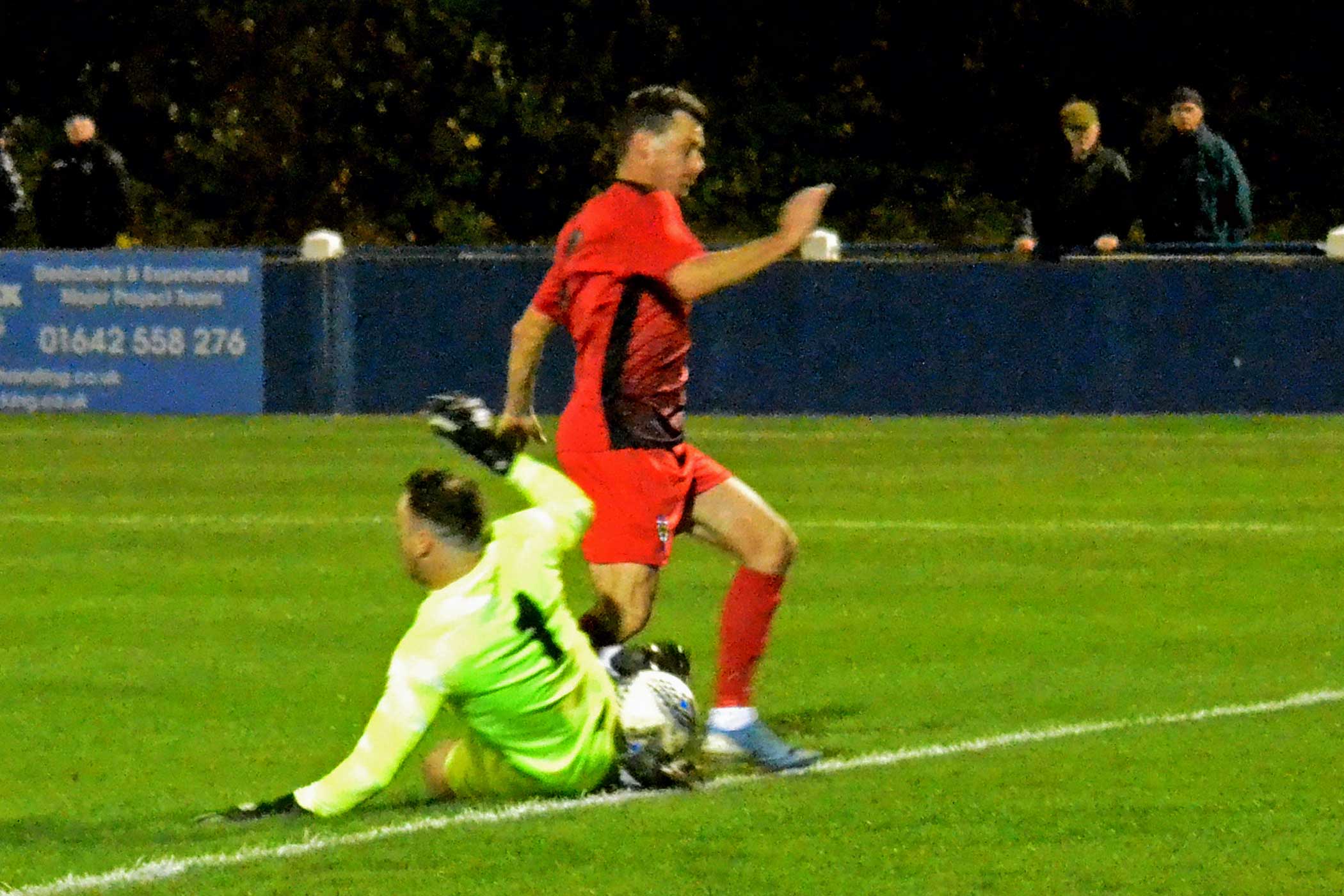 On 74 minutes an inswinging corner from the right caused chaos in the Billingham goalmouth, but the home side managed to scramble the ball away.

The nearest Consett came to finding a winner in a forgettable 45 minutes was six minutes from time, when sub Carl Lawson fired over the bar from Larkin’s set-up.

There was a half-hearted shout for a penalty in the first of three added minutes, when Andrew Wilson clipped Marriott, but it was in hope rather than expectation, and when the final whistle went a couple of minutes later Billingham were happy with a share of the spoils, unlike Consett.

However, the point could prove crucial at the end of the season, particularly as the division’s form team West Auckland moved into second place, three points behind the leaders, with a 3-0 win at Seaham.