Consett returned to the top of the Northern League Division One after thumping Bishop Auckland 5-0 at Belle View Stadium.

Strike pair Dale Pearson and Stephen Callen helped themselves to two goals each and skipper Arjun Purewal was also on the scoresheet as the Steelmen dominated from start to finish.

The result leaves Bishops fourth-bottom, and it’s no exaggeration to say they have their goalkeeper to thank for preventing the scoreline being double figures.

Manager Terry Mitchell made two changes to the team beaten by Bridlington in the FA Cup three days earlier, with Purewal returning in central defence alongside Adam Male, who was playing his first game for three seasons. James Martin moved to left-back and Calvin Smith into midfield, with Olly Scott injured and Matty Slocombe unavailable.

Consett took control from the start, and Stephen Callen opened the scoring after just two minutes, stretching to reach Dale Pearson’s ball to the back post, pictured below. 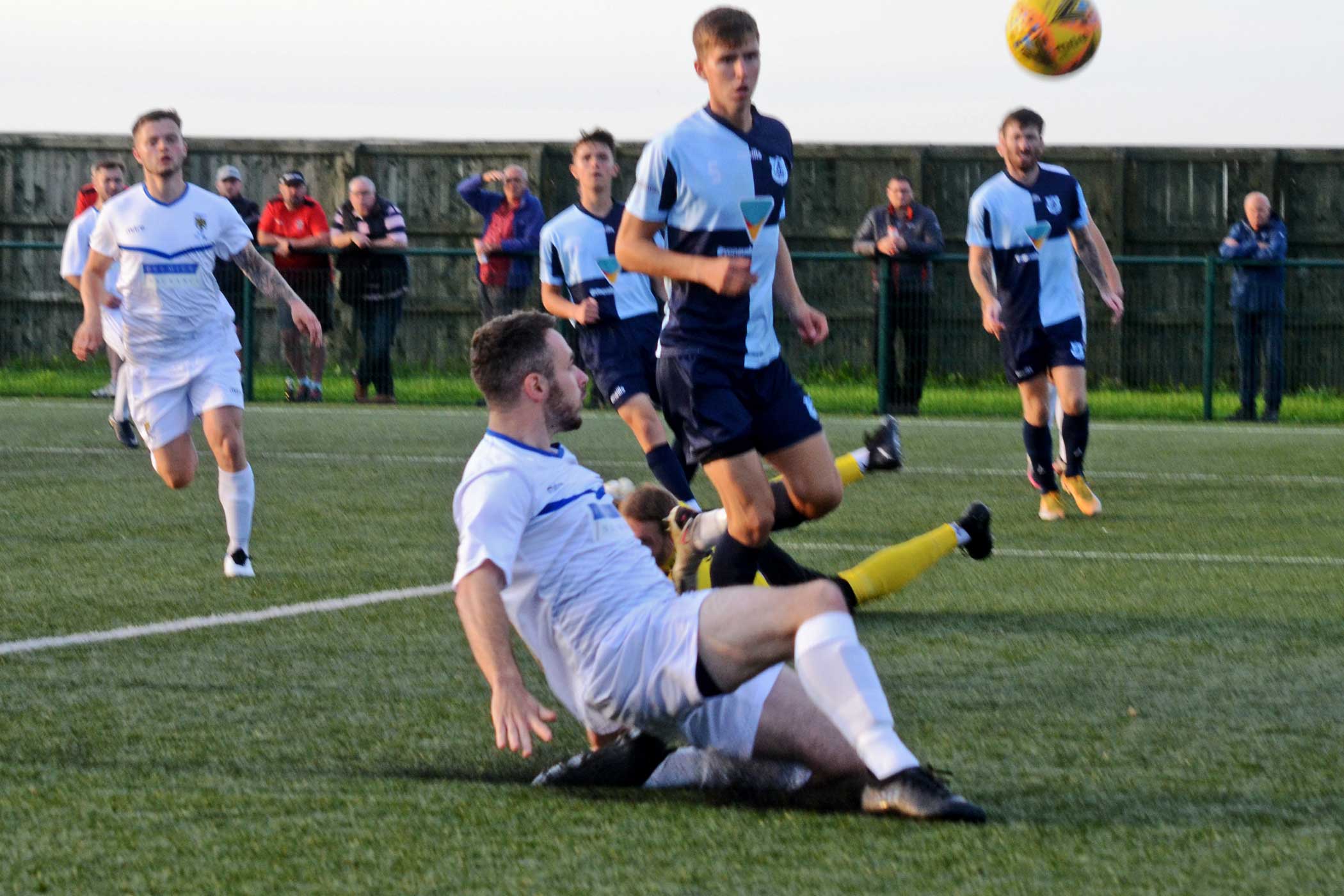 The only surprise was Consett took until the 33rd minute to score again, Arjun Purewal netting with a thumping header, pictured top, from Luke Carr’s free-kick from the right.

A minute later it was 3-0, as Consett broke quickly from defending a corner. Jermaine Metz found Callen, whose pass left Dale Pearson running clear on goal, and he held his nerve to claim his sixth goal of the season, pictured below.

Six minutes before half-time a superb crossfield pass by Calvin Smith picked out Pearson on the left, and he was denied by the fingertips of Nick Liversedge, as the Bishops keeper pulled off a superb save, with Callen inches away from converting as he slid in at the back post.

Three minutes into the second half Consett almost made it four when excellent work by James Martin and Pearson set up Callum Guy, who smashed a shot against the bar from 18 yards.

On 59 minutes Martin surged into the box after being sent clear by Pearson’s clever backheel, but was denied by a superb save by Liversedge as it headed for the top corner.

There was nothing the keeper could do, however, when Consett made it 4-0 from the resulting corner, Jake Orrell’s kick picking out Stephen Callen to stab home his second of the game from six yards, pictured below.

The Steelmen were rampant, but Liversedge stood firm, saving twice from Carr, denying Callen his hat-trick at point-blank range, and making a superb full-length save to thwart Orrell.

Again there was little he could do about the goal which made it 5-0 in the 85th minute, as Carr’s perfect pass sent Dale Pearson clear, and he gave the keeper no chance, scoring his seventh goal in eight games this season, pictured below.

Consett were able to give young defender Ellis Swinburn his debut for the last few minutes as they continued to lay siege to the visitors’ goal, but a second 5-0 win of the season in front of a crowd of 548 was a perfect response to the weekend’s disappointing FA Cup exit.

Next up for Consett are Thornaby, who could be back on top of the table if they beat Newcastle Benfield tomorrow night. Kick-off at Belkle View is 3pm on Saturday.
MATCH REPORT & PICTURES: GARY WELFORD