Consett maintained their position at the top of the Northern League with a comfortable home victory against Guisborough Town on a wet and windy afternoon.

The Steelmen produced a more fluid performance than the previous week against Sunderland RCA and were rewarded with first-half goals from Jake Orrell and Colin Larkin, while a second-half penalty from Luke Carr secured the three points.

Manager Terry Mitchell was forced into one change from the previous week. Olly Scott was injured, so James Martin came in at left-back. The visitors included Lewis Green, who started the season as a Consett player, in the centre of their midfield.

The home side were on the front foot from the very first minute, and it wasn’t long until they took the lead, partly thanks to some excellent refereeing. In the fourth minute Guisborough defender James Rowe took a bad touch, which allowed Stephen Callen to break into the area. The defender pulled him back for what would have been a certain penalty.

However, the referee played a good advantage and Callen managed to get his shot off. Though it was blocked, the rebound fell nicely for Jake Orrell, who couldn’t miss from 10 yards out, pictured below. 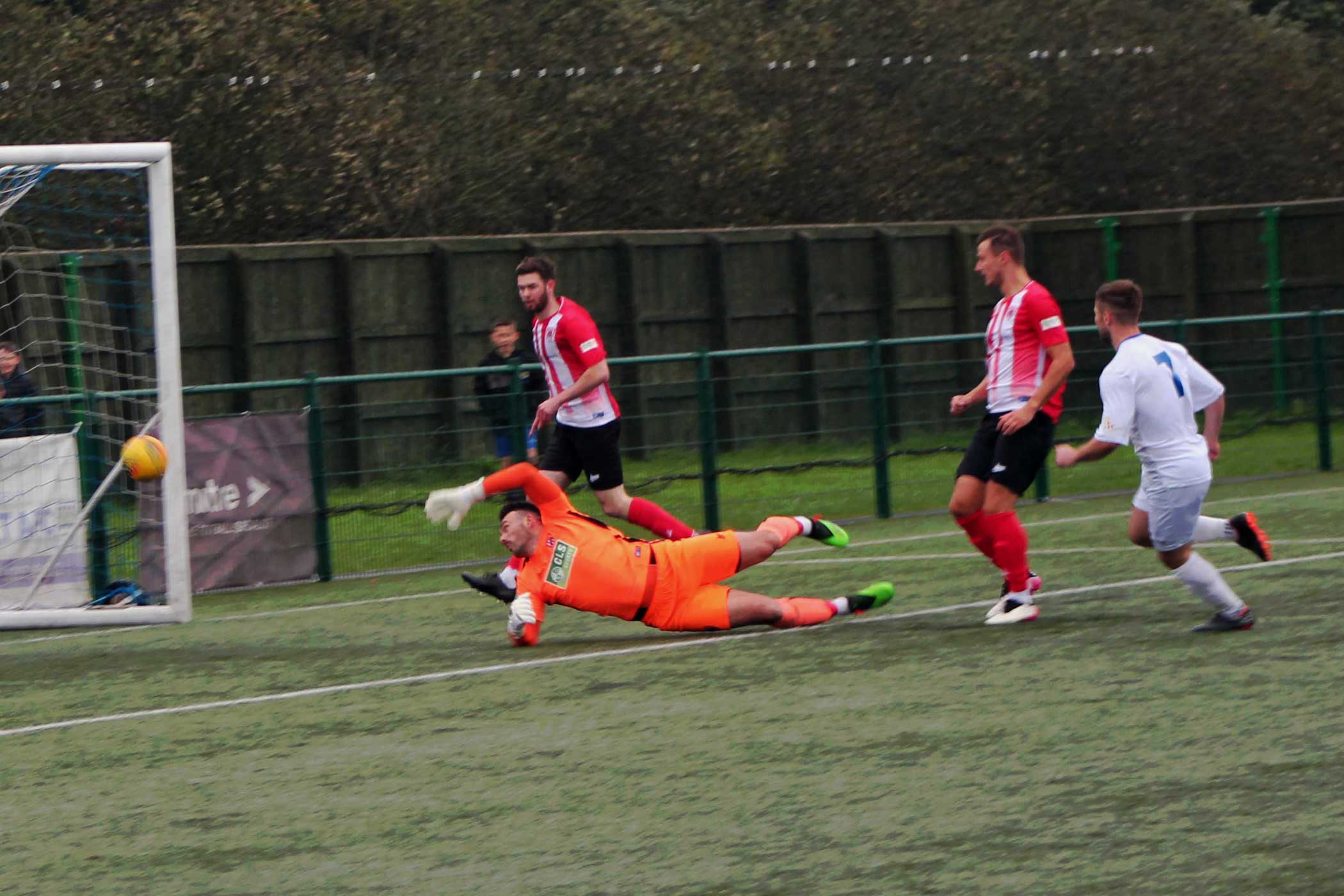 Consett continued to go forward at every opportunity, and Calvin Smith tested Robert Dean in the Guisborough goal on 11 minutes with a fine effort from 20 yards, while Orrell almost registered his second of the game in the 15th minute as he curled an effort just wide after good work by Jermaine Metz.

A second goal looked inevitable, with Consett enjoying total domination of the ball, and it duly arrived in the 27th minute – and what a goal it was, turning defence into attack in a matter of seconds.

The ball started with keeper Kyle Hayes and found its way to Callen, who in turn released Luke Carr down the left wing. The little playmaker hit a wonderful ball into the box with his left foot, which was met first time on the half-volley by Colin Larkin, who crashed the ball into the roof of the net, pictured below. There can’t have been more than 10 seconds from the ball being with Hayes to it hitting the Guisborough net. 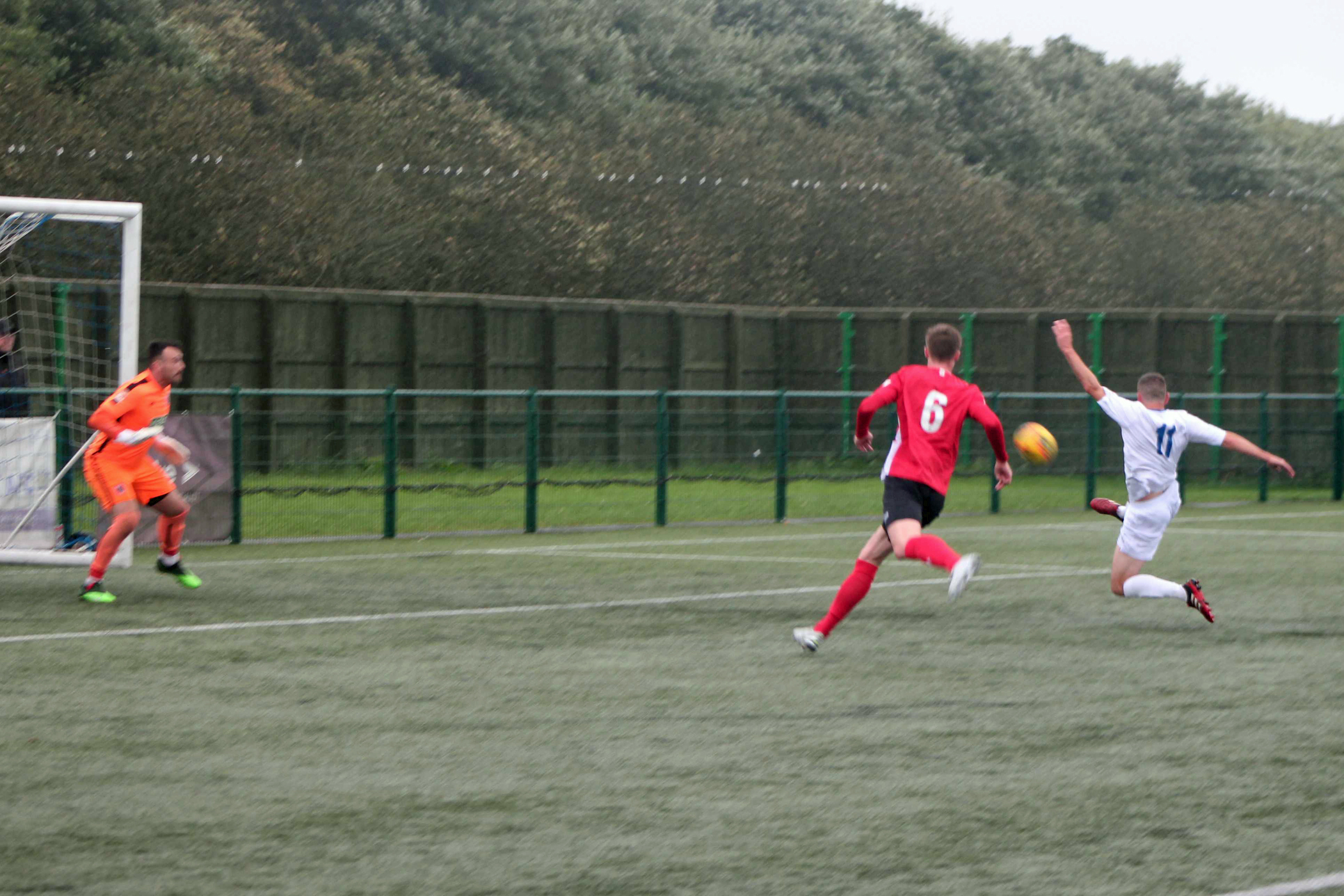 A third goal almost followed only a minute later and it was again down the Consett left as full-back Martin beat his man, turned inside and hit a fierce shot with his weaker right foot that Dean did well to palm away.

Despite the home side continuing to dominate that was the final chance of the half and Consett went in two up, with Hayes a spectator in goal.

The start of the second half was a far more even affair and Hayes was the first keeper called into action when he was forced into an excellent diving save from a 20-yard Steven Roberts effort on 58 minutes. A minute later, Consett should have put the game out of sight as Callen squared an inviting ball for his strike partner eight yards out, however Larkin could only lift his effort over the bar.

Guisborough again threatened on 63 minutes as their captain Joseph Bartliff beat Metz and hit a firm low shot that looked as though it would creep inside the post if it hadn’t been for an intervention from the diving Hayes.

However, any thoughts of a comeback were soon extinguished as the game was put to bed as a meaningful contest on 68 minutes. Luke Carr‘s trickery in the box lured a visiting defender into a rash challenge and in the absence of the still-suspended Dale Pearson, the No 10 picked himself up and fired the resulting spot kick into the bottom corner, pictured below. 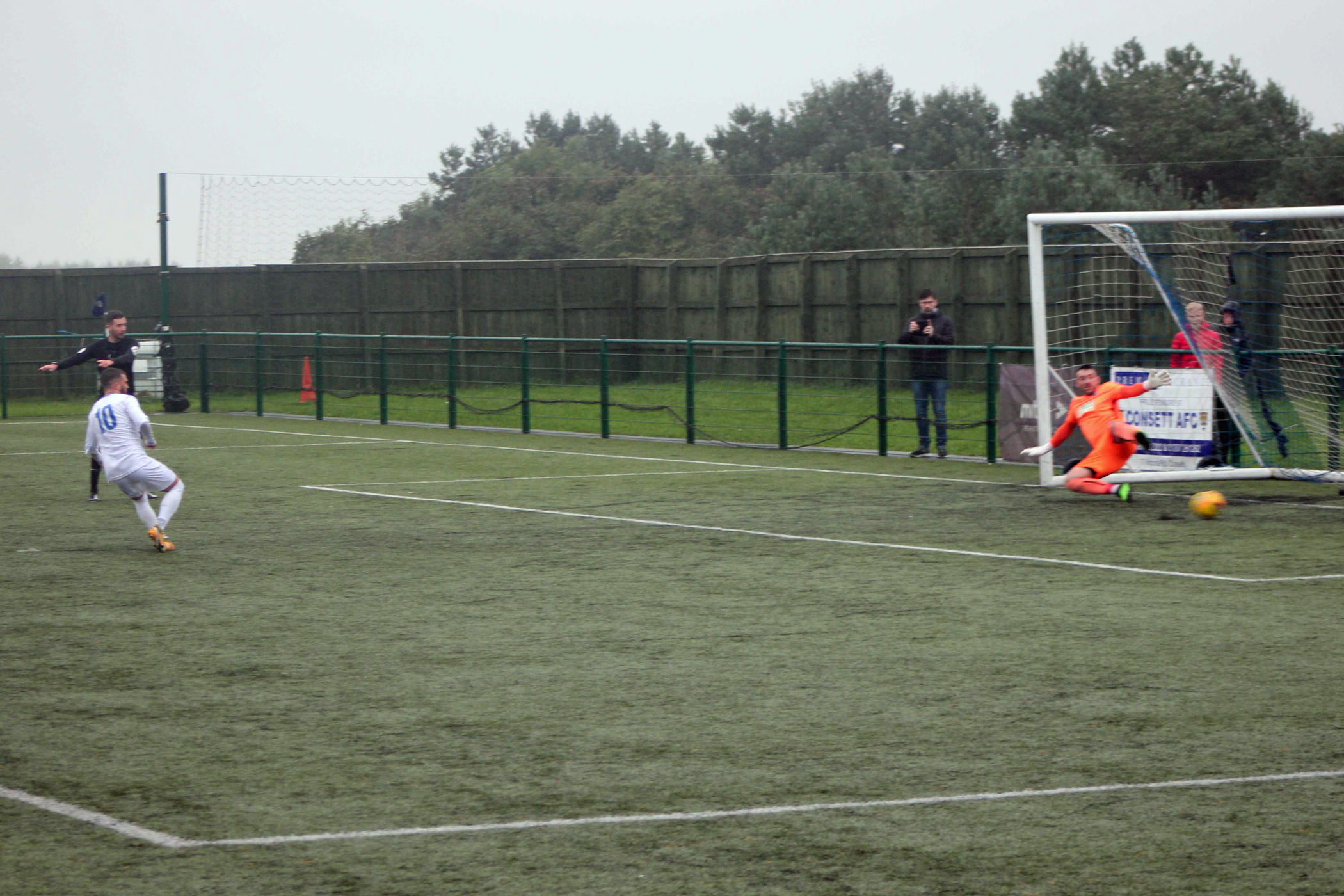 The final 20 minutes passed by largely without incident, with the closest the scoreline came to being added to on 80 minutes as Larkin rose to meet a fine cross from Metz, but his header was expertly tipped over the bar by Dean.

The final whistle brought an end to a comprehensive all-round team performance from the Steelmen, with three more points deservedly added to their total and, impressively, another clean sheet in front of 455 wet and windswept fans.