Dale Pearson took just three minutes to make his mark, sweeping the ball home from close range from Jermaine Metz’s pinpoint cross at the end of a wonderful flowing move as Consett started in dominant fashion.

On 15 minutes Consett doubled their lead when another of the newcomers, young centre-back James Metcalfe, came in at the back post to finish Luke Carr’s superbly-delivered free-kick, directing his effort just inside the far post, pictured below. 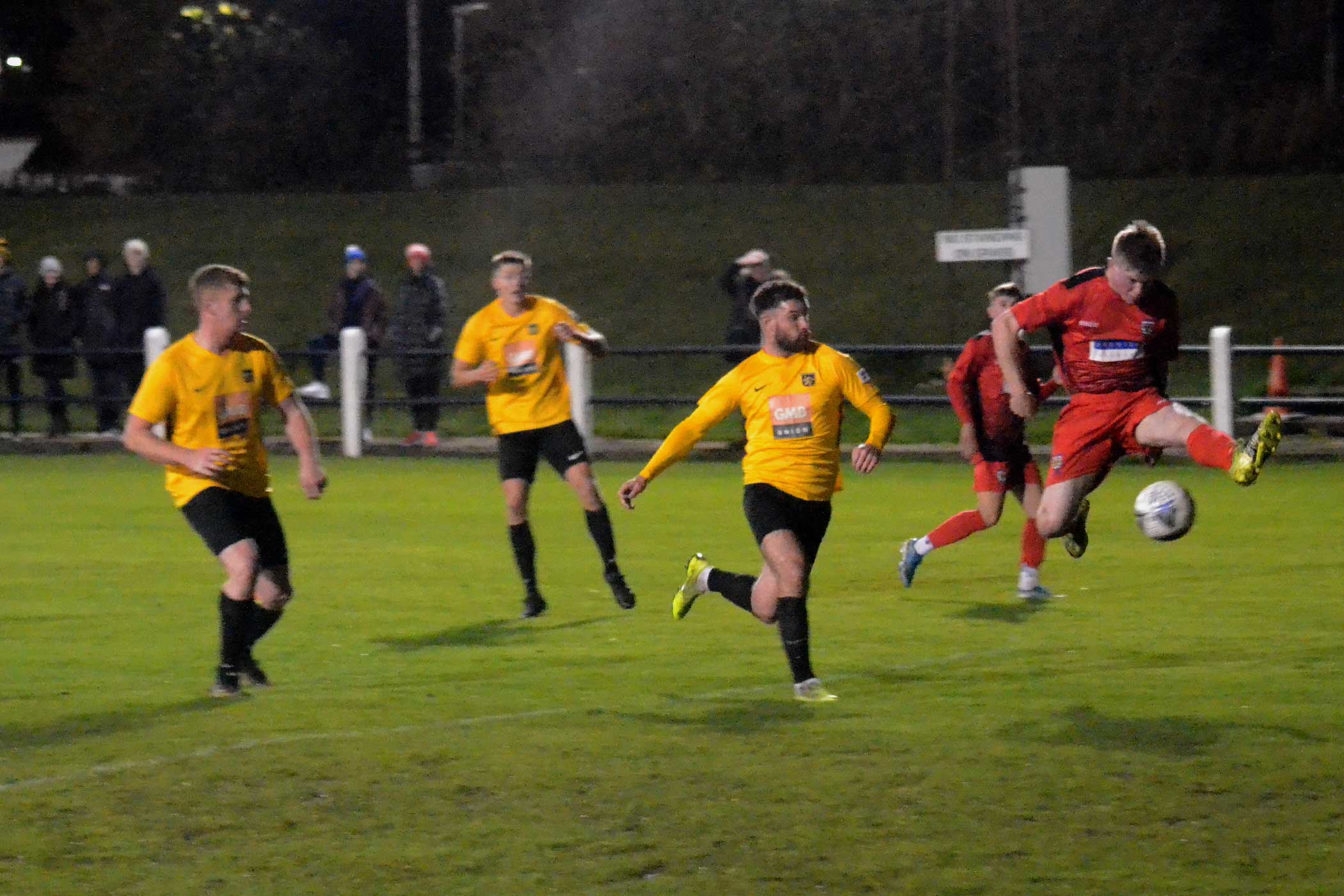 Pearson almost turned provider in the 18th minute when he beat several defenders in a run which took him from the right flank to the left of the penalty area, and teed up King for a shot that was just wide.

The No 9 was at it again in the 26th minute, sending in an inviting cross from the left which King was within a whisker of converting with his head.

King wasn’t to be denied though, and made it 3-0 in the 29th minute, planting a header past Crook keeper Aaron Skelton after timing his run perfectly and outjumping his marker to meet Jake Orrell’s corner from the right.

A minute later it was almost four, as the rampant Luke Carr played in Pearson, his effort was just too high and wide from a tight angle.

But on 34 minutes the result was put beyond doubt when Skelton made a fine double save from Carr and then Guy, but was helpless to stop Dale Pearson from slamming in the rebound for his second goal of the night.

Orrell tested the keeper at his near post, Metz fired a rising drive over the bar from 20 yards as Consett poured forward, and Crook’s only response were an off-target shot by Joe Hillerby and a header over the bar by Ben Reay.

Consett started the second half the same way they had the first, with Dale Pearson completing his hat-trick in the 49th minute, taking the ball round the keeper, pictured top, after super play by Marriott.

Five goals up with 40 minutes left to play, Consett could be forgiven for easing off the pedal a little, and Crook had a couple of chances to reduce the arrears.

First, Kyle Hayes was forced into his first save of the night, using his legs to deny Jamie Tumilty, and then Eddie Thomas placed a glancing header wide of the far post. Their best chance came in the 66th minute, when Toby Pascoe crossed from the left and Thomas and Mason Hurworth had efforts cleared off the line.

It was almost six on 69 minutes, when Guy cut in from the left and fired against the post. The rebound fell to King, whose shot was cleared off the line by some excellent defending from Dale Elgie.

But Consett were more than happy with 5-0, and a home defeat for fellow title hopefuls North Shields at the hands of Ryhope CW meant it was a good night all round.

A special mention should go to the Conny Army, who once again travelled in large numbers, giving Crook a bumper attendance of 503 – by far their biggest so far this season.
MATCH REPORT & PICS: GARY WELFORD