Consett re-ignited their Northern League title hopes by coming from behind to win 2-1 at a sunny Bishop Auckland.

After a first half that was largely incident free, the Steelmen trailed to an early second half goal from their former striker Adam Burnicle. But two goals from set plays, firstly from Dan Capewell and then Colin Larkin, were enough to secure a crucial victory.

The main team news for Consett concerned skipper Arjun Purewal, pictured below, who returned to the line-up following a lengthy injury absence, and he took his place in the centre of a three-man defence, while Lewis Green kept his place following his excellent display in the midweek cup game at Redcar Athletic. 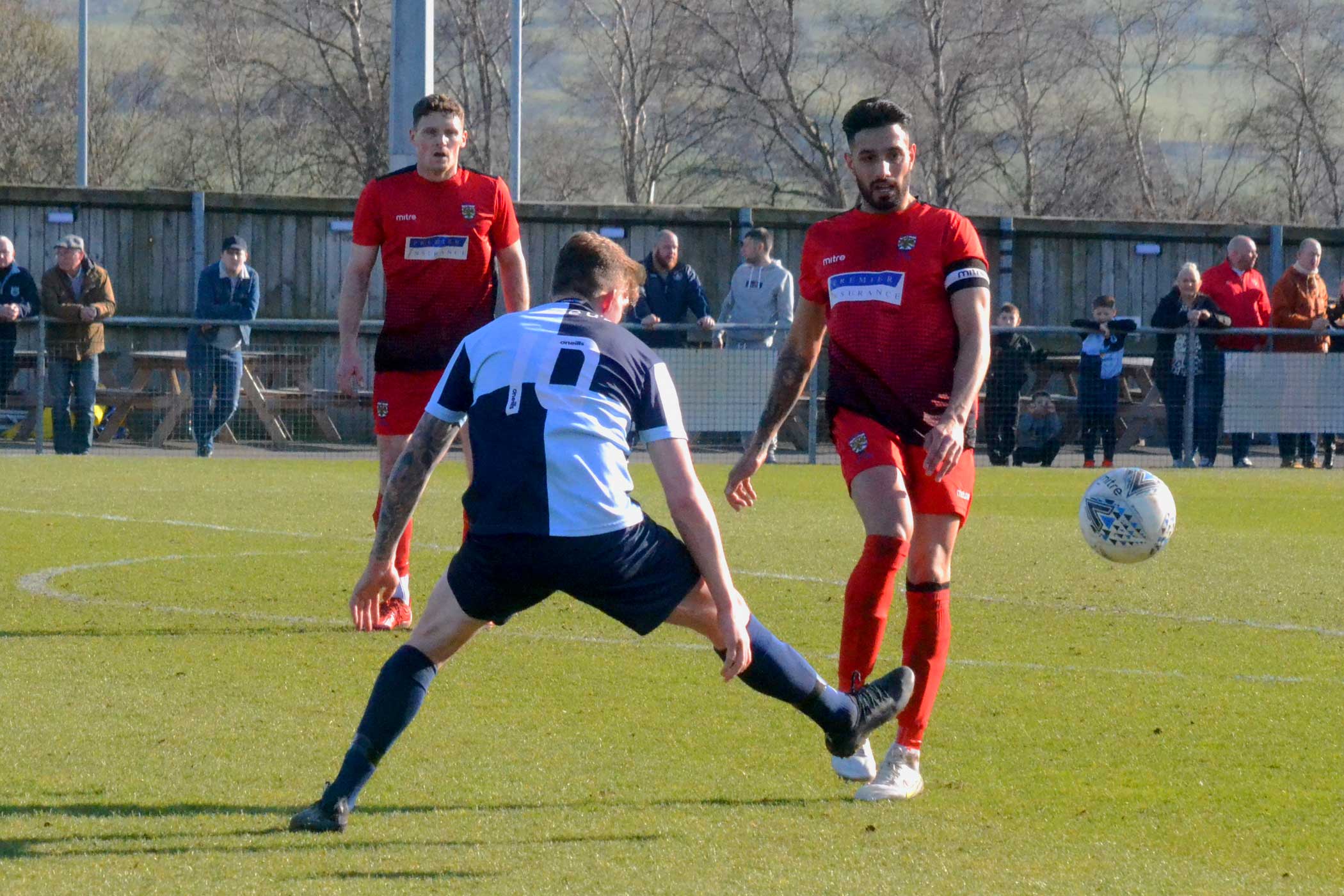 A healthy crowd of 312 were ready for what seemed destined to be an exciting clash between one side going for promotion and the other trying to fight off relegation. However, once the game started it soon became a war of attrition, with neither side able to gain much of an advantage.

The first real effort of the game came from Lewis Green in the 11th minute, but his well-struck shot from 25 yards was always going over, and it was the 33rd minute before an effort on target, as Consett striker Scott Heslop tested Nick Liversedge from distance, but it was a comfortable save.

As the half wore on Bishop Auckland began to gain the upper hand in terms of possession and territory, and while they forced a series of corners, they were comfortably dealt with by the Consett back line, and Kyle Hayes remained untested in the visiting goal.

The half looked to be grinding its way to an uneventful end when Consett suddenly gained the upper hand and forced a period of sustained pressure. On 39 minutes a scramble ensued in the home goalmouth following a corner resulted in Liversedge having to be at his best to tip over a fierce shot from Larkin, and from the resulting corner Calvin Smith had another goalbound effort blocked.

The best chance of the half arrived in the 42nd minute as a clever through ball from Jake Orrell found the advancing James Martin, whose effort looked to be heading for the bottom corner, only for a last-ditch block to send it narrowly wide, pictured below. 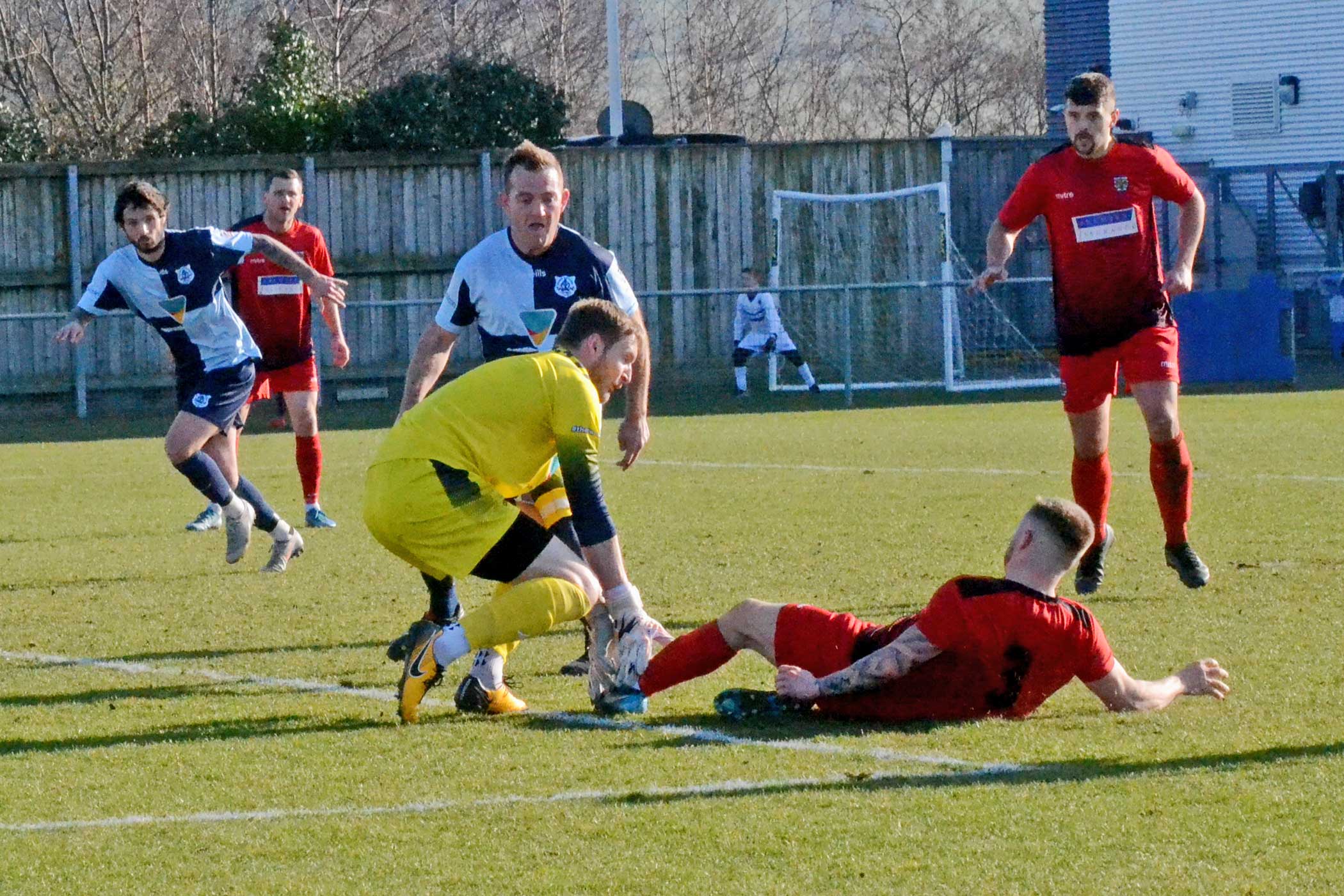 Any hopes Consett had of their late first-half domination continuing into the second period were soon dashed as Bishop Auckland took the lead on 47 minutes through the familiar figure of Adam Burnicle.

Only recently signed by Bishop Auckland, the ex Steelman has made a habit of scoring against Consett over the years. He was first to react to a cross not being dealt with by the Consett defence he managed to prod the ball past the advancing Hayes from 10 yards out.

The goal was wildly celebrated by the home support but their joy was short-lived as Consett equalised on 52 minutes.

Awarded a free kick in a central position 25 yards out, everyone in the ground was expecting Jake Orrell to shoot, but the play maker instead floated a lovely ball to the far post, where Dan Capewell had ghosted in to volley the ball high into the net from a few yards out, pictured below. 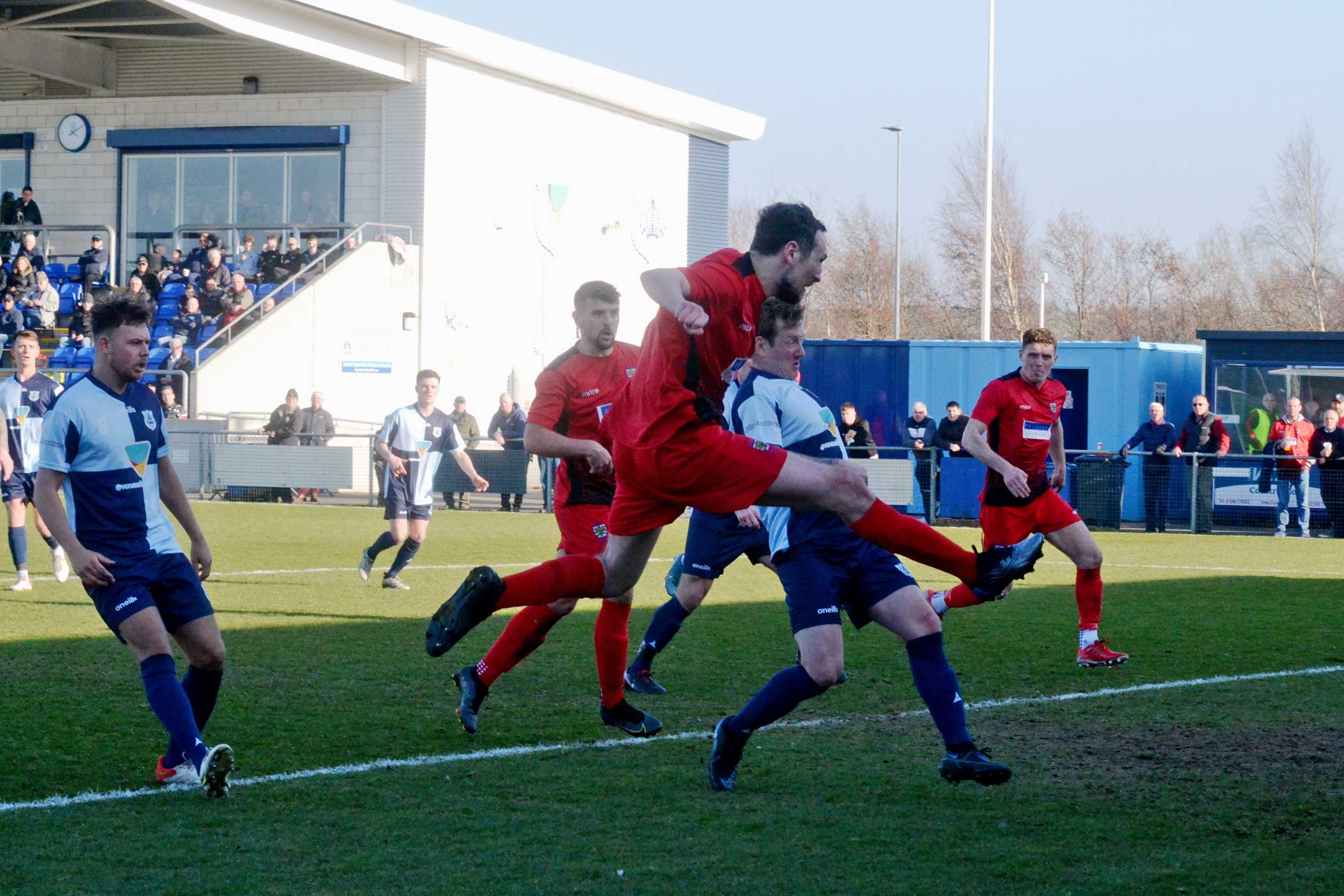 Buoyed by the equaliser the visitors started to control most of the possession but struggled to create any clear-cut chances.

There were decent efforts from distance by Orrell and Matty Slocombe that didn’t unduly trouble Liversedge, while a cross from Green found the head of substitute Ross Wilkinson, but the big defender couldn’t get enough power on his effort and the keeper again saved easily.

On 82 minutes the breakthrough looked possible as Slocombe slalomed his way into the penalty area, beating three defenders in the process, but at the crucial moment he seemed to get caught in two minds whether to shoot or square the ball for a teammate and did neither.

A draw looked to be on the cards when on 85 minutes substitute Nick Cassidy sent a lovely free-kick into the penalty area with his first touch of the game and veteran striker Colin Larkin beat his marker to send a looping header, pictured below, into the net and send the contingent of Consett fans behind the goal into raptures. 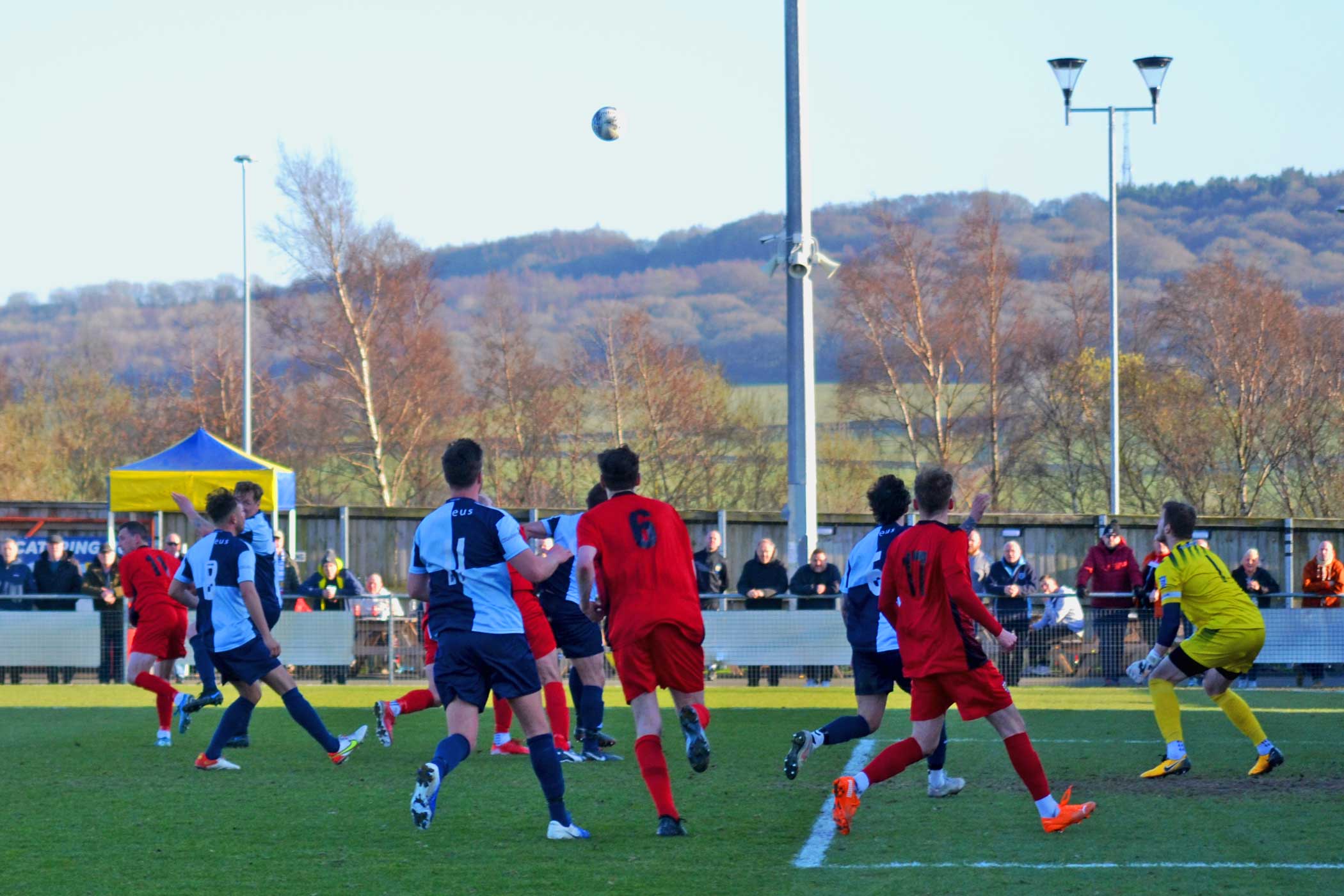 Inevitably the remaining few minutes plus four minutes of added time seemed to take an eternity, and while the home side did put Consett under some pressure, Hayes remained untroubled and Consett had earned a hard-earned victory.

The result was made all the sweeter for the travelling support by news that title rivals North Shields had been held to a 2-2 draw at home by Whickham – the two sides of course meet at North Shields on Wednesday evening in what could prove to be a crucial game in terms of the destination of the 1st Division title.