Northern League leaders Consett were held to a 0-0 draw by Newcastle Benfield in their final game of 2021 – but it took a save of the season contender to deny them all three points.

Benfield were much changed from the side beaten 4-0 in the FA Vase the previous week, and it was one of their returning players, goalkeeper Andrew Grainger, who won his side a point.

The game was entering added time when Consett left-back Olly Scott send over a superb cross from the left, which picked out Colin Larkin.

The veteran striker’s bullet header looked like a matchwinner all the way, only to be thwarted by Grainger, who flung himself across goal to tip the ball over the bar, pictured top.

It was the defining moment of a game which saw the Steelmen have two decent penalty claims turned down by referee David Holmes.

Consett’s interim manager Andy Coyles made two changes to the starting XI which had won so comprehensively at Sam Smith’s Park, with Dan Marriott returning from suspension to replace the unavailable Darren Holden at right-back, and Carl Lawson coming into the attack for Colin Larkin.

Benfield, under the caretaker control of coach Steve Bowey and veteran striker Paul Brayson after parting company with manager Stuart Elliott in the wake of the Vase defeat, made six changes in all.

The opening exchanges were very cagey, and it was one of the visitors’ newcomers, striker Ryan McGorrigan, who had the first attempt on goal after 10 minutes, firing wide after bursting past his man.

Benfield had started slightly brighter, and Peter Glen-Ravenhill had another chance on 16 minutes, but his dipping half-volley flashed wide.

The home side had their first chance a minute later, when Carr’s pass played in Pearson, whose firm low shot was saved by the outstretched hand of Grainger, with Matty Slocombe just unable to benefit from the follow-up.

Consett’s first penalty shout, in the 22nd minute, saw Carr beat the keeper to Jake Orrell’s through ball, pictured below, but get absolutely flattened in the process. The referee waved away Consett’s appeals, even though the No 10 appeared to have an excellent case. 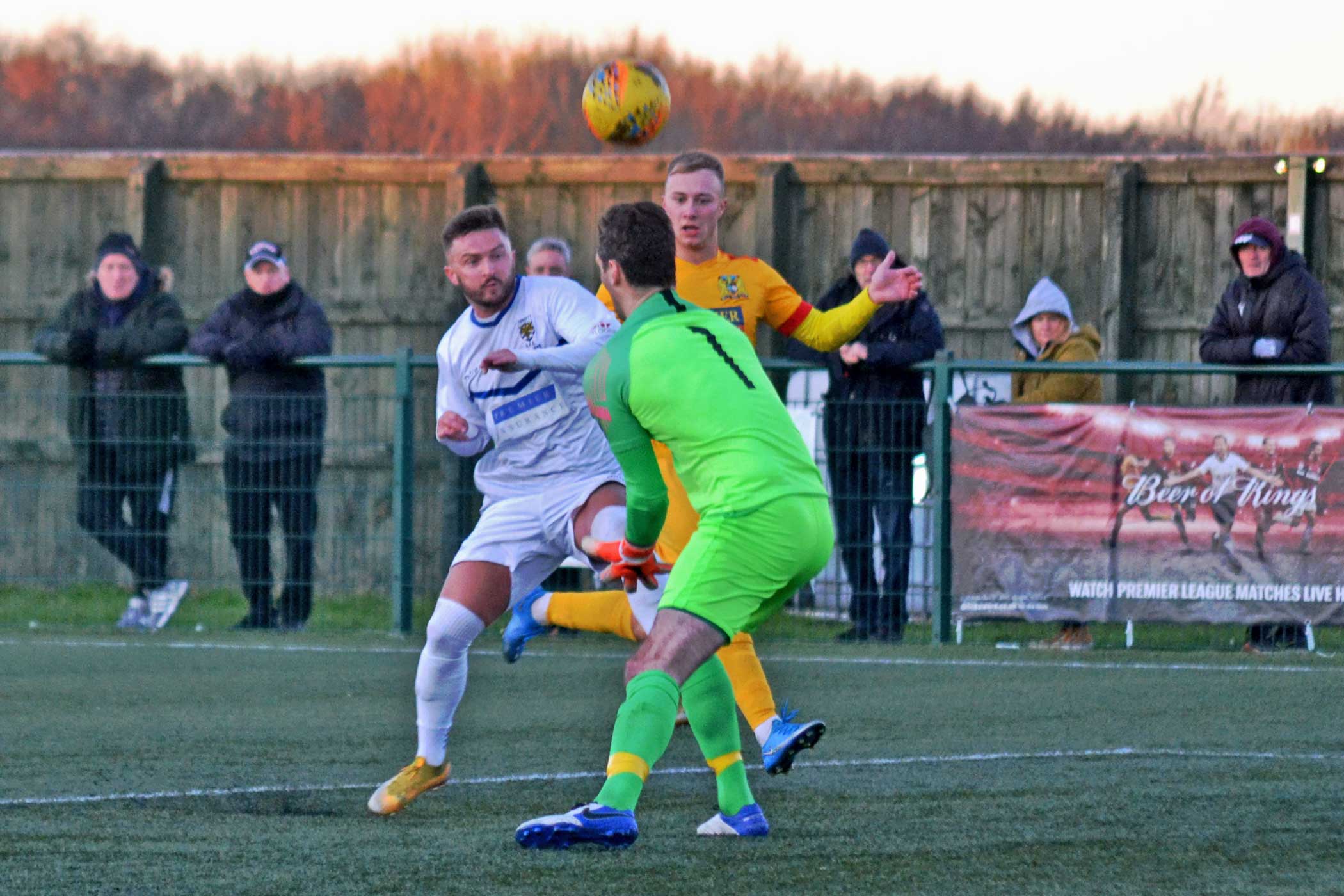 Benfield were posing much more of an attacking threat than they had in the previous meeting, and McGorrigan had close to ending the deadlock on 24 minutes when he took down a cross from the left and slammed a shot against the post, with keeper Kyle Hayes beaten.

Carr was a growing influence on the game, and he had two good attempts in the space of three minutes. First, on 28 minutes, he cut in from the right, jinked past a defender and fired just over from the edge of the box. Then a great run and shot saw him denied by Grainger, who got a strong hand to his low effort.

It wasn’t all one-way traffic, however, and on 39 minutes Hayes made a good save from Jake Turnbull to keep the scores level.

The start of the second half saw Consett step up their game, and it took a great piece of defending to deny Pearson on 49 minutes when a superb cross from Olly Scott picked him out at the back post.

Carr saw one shot blocked by a defender and another fizz just wide as the home side started to dominate, and they upped their attacking game even more when Larkin replaced Lawson on 67 minutes, and immediately fired a chance just wide after a good link-up with Pearson.

Pearson and Orrell both put chances wide as Consett continued to seek a breakthrough, and they had another strong penalty shout in the 86th minute, when Pearson appeared to be tripped by a defender, but again nothing was given.

Then came that remarkable save from Grainger, and though Consett had a couple more chances, with Purewal heading over from the resuilting corner and Scott firing straight at the keeper, it was a day when, despite the two sides’ free-scoring reputation, defences reigned supreme.

The goalless draw was Consett’s first in 60 games, going all the way back to 4 January 2020, when they were held 0-0 at Northallerton Town.

They remain eight points clear of their nearest challengers at the top of the table, with only a handful of games due to be played over the festive period.

West Auckland’s match was postponed, so Ryhope CW’s 4-1 win at Newton Aycliffe lifted them to second. North Shields went third after two late goals saw them come from behind to beat Northallerton 2-1.