Consett shrugged off the disappointment of exiting two cups in a week by strengthening their position as Northern League Division One leaders with a 2-0 win at Newton Aycliffe.

It was one of their recent signings, Scott Heslop, who will grab the headlines after scoring both goals, but it was an excellent all-round team performance.

Manager Andy Coyles made six changes to the starting XI from the midweek game against Shildon, with Dan Capewell – signed from Dunston the day before the game – making his debut at centre-back. The other new signing, Alex Francis from Whickham, was unavailable due to work.

In fact the Steelmen were without NINE players for a variety of reasons, and faced a daunting task against their sixth-placed hosts, who won at Belle View earlier in the season, and included two old boys, Nick Green and Andrei Ardelean, in their ranks.

It was a special day for one Consett player, Calvin Smith, pictured, who was making his 400th appearance for the club – becoming just the eighth player in its history to reach that landmark. 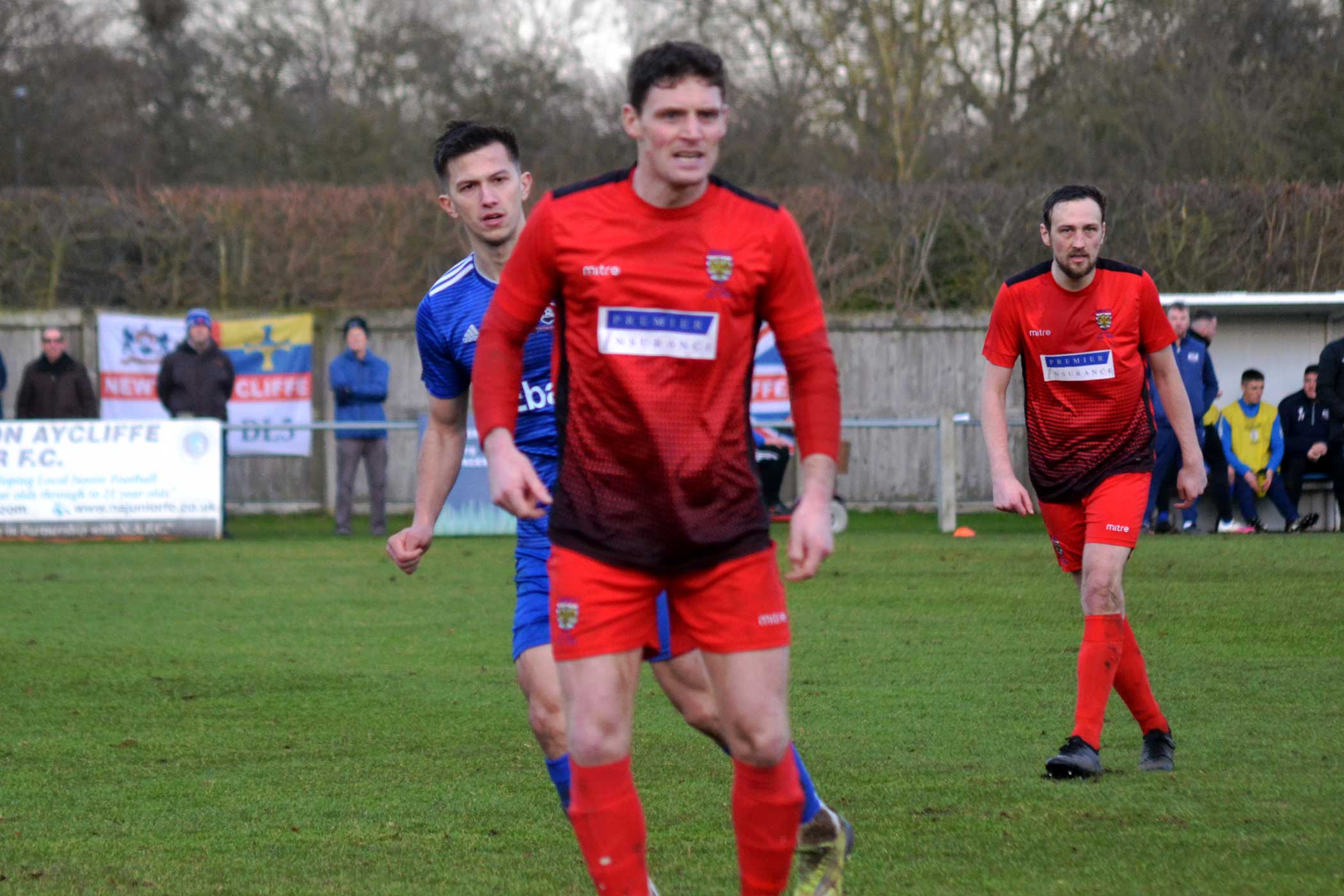 Aycliffe started well, and almost took the lead on 10 minutes when Liam Jarvie was denied by the post, and a minute later Consett were grateful to keeper Kyle Hayes, who beat out Ethan Wood’s well-struck effort.

But they slowly grew into the game, and took the lead on 18 minutes when skipper Luke Carr whipped in a free-kick from the right, Aycliffe’s Marc Costello could only divert the ball goalwards, and Scott Heslop got the touch which took it through the keeper’s legs for 1-0, pictured top.

Four minutes later it was 2-0 as a great move down the left saw Colin Larkin send in a superb cross for Scott Heslop to slide home from inside the six-yard-box, pictured, for his fourth goal in two games. 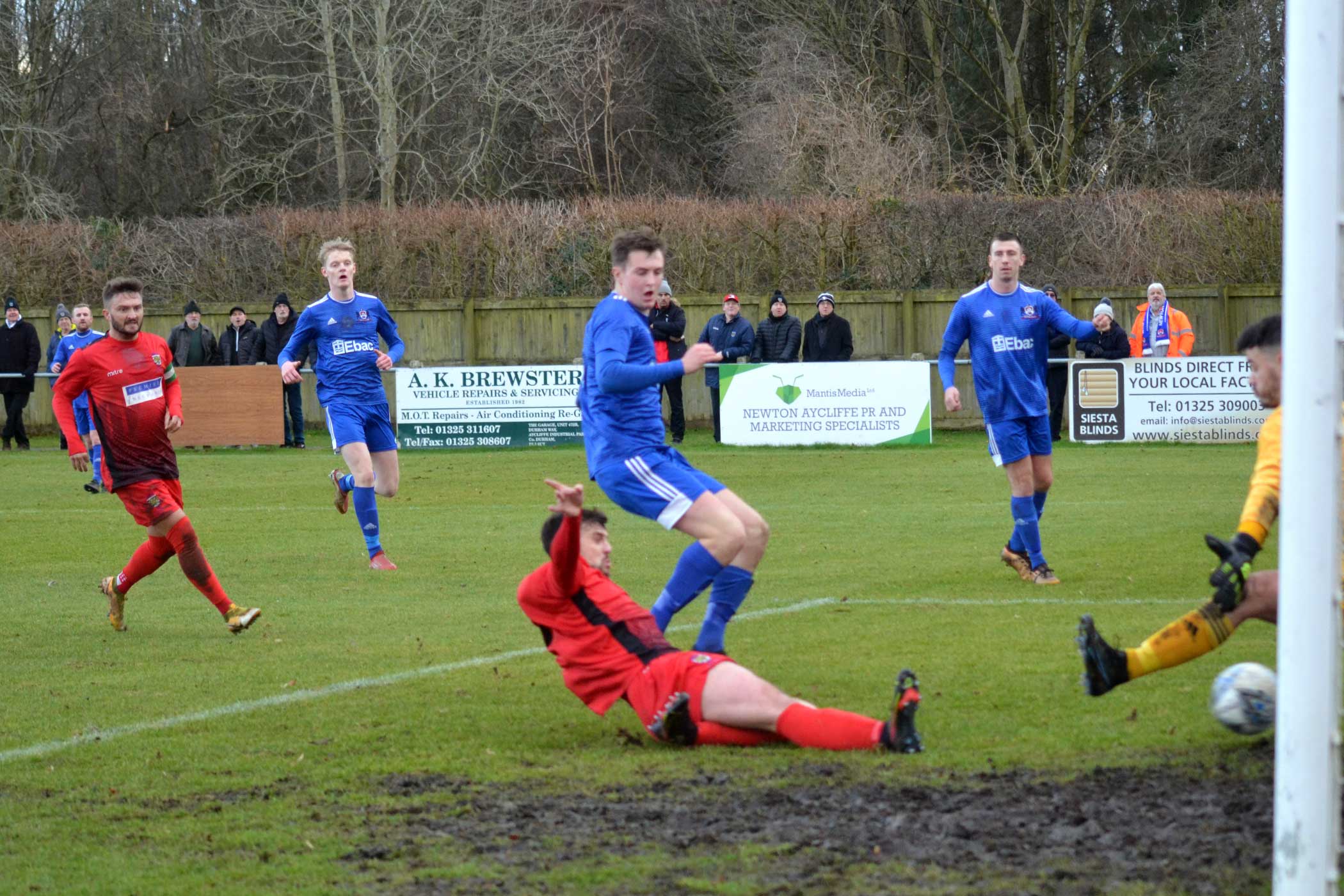 Four minutes before half-time it was almost three when another move down the left saw Larkin fail by inches to get his head to Darren Holden’s cross, with Lewis Green, coming in late at the back post, unable to steer his effort on target.

Aycliffe started the second half well, and Hayes had to be at his best on 51 minutes to keep out a close-range effort from Jarvie, while they also had a strong penalty appeal for handball against Capewell turned down.

The home side dominated possession for most of the half, but Consett – with Capewell and Smith outstanding at the heart of the back four – defended superbly, and the Steelmen had a couple of late chances to make the final scoreline even more emphatic.

A quick break on 65 minutes saw Heslop pick out Carr’s run in midfield with a superb ball into space, and the skipper got all the way to the edge of the box before unleashing a shot which was deflected behind for a corner.

With four minutes to go, Lewis Green did well to cut the ball back from the byline, but sub Carl Lawson could only head into the keeper’s arms from a few yards out.

Then Aycliffe keeper Adam Pickford made the save of the game from Jake Orrell’s 25-yard free-kick in added time, getting a strong hand to the ball to ensure the game finished 2-0.

The result meant Consett mantained their eight-point lead at the top of the table from Thornaby, with North Shields two points further behind them, with three games in hand on the two teams above them.