Consett increased their lead at the top of the Northern League 1st Division with a good 3-1 win over fifth-placed Ryhope CW at a blustery Belle View Stadium.

With manager Andy Coyles away, his assistant Paul Bryson was in charge for the clash with the fifth-placed side, and there were two changes to the starting line-up from the previous game, the 3-2 defeat at Thornaby.

New signing Matthew Ridley came into the back four in place of Jermaine Metz, and Alex Francis came into midfield for his first start at the expense of Lewis Green.

Before the game, long-serving Consett player Calvin Smith received an award on the pitch, pictured below, from president John Hurst and chairman Frank Bell to mark his 400th appearance for the club in the recent away match at Newton Aycliffe. 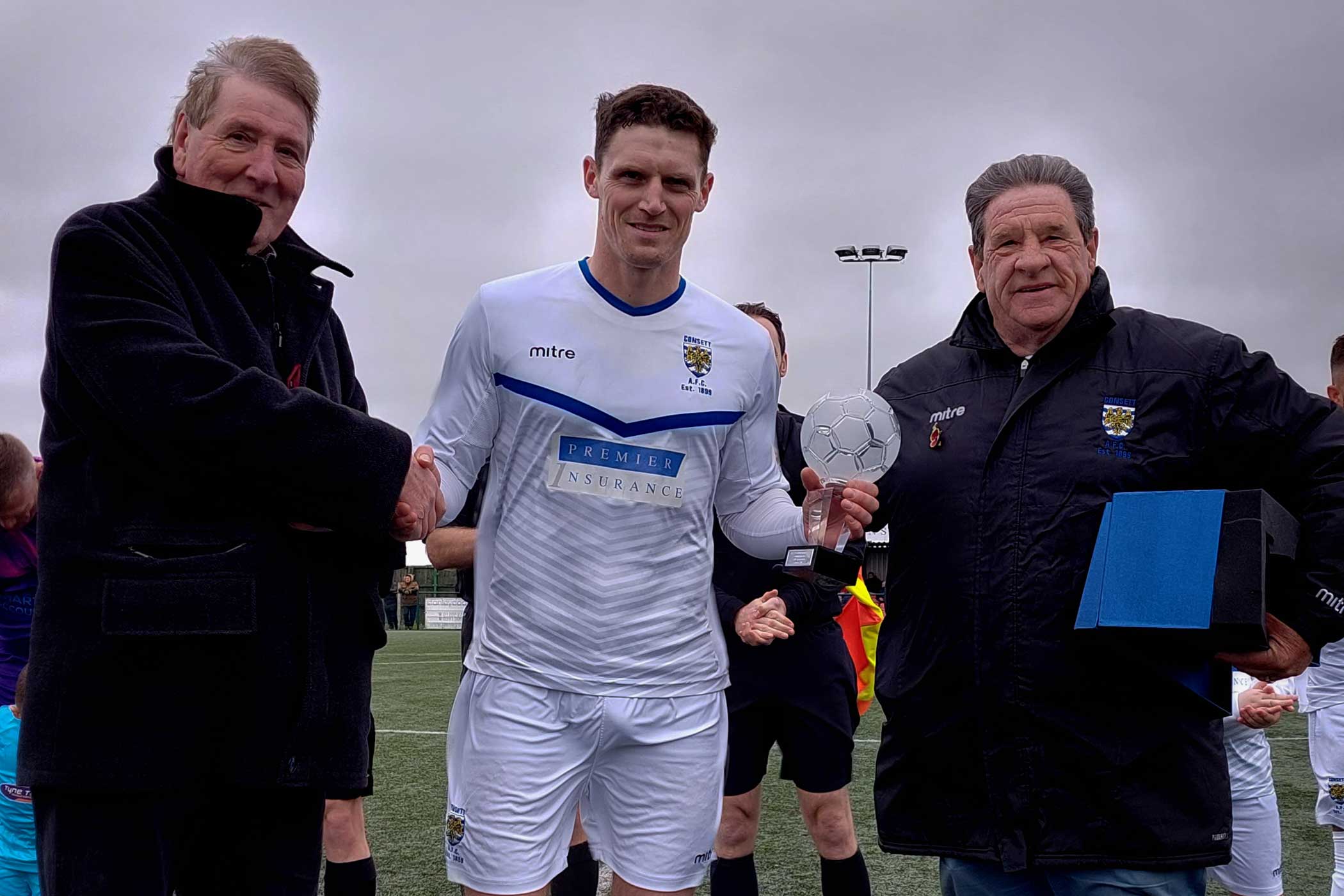 Recent signing Dan Capewell got the Steelmen off to a perfect start, heading home his first goal for the club from close range, pictured top, after Colin Larkin’s shot from a corner was blocked in the 7th minute.

But Ryhope showed their league position is no fluke by responding with an equaliser three minutes later, Danni Lay turning the ball in at the back post after a low-hard cross across the six-yard box.

Consett suffered another blow in the 15th minute when striker Scott Heslop limped off, to be replaced by Carl Lawson, and after a scrappy spell in which neither side really threatened, it was the substitute whose pass set up Luke Carr in the 41st minute to almost restore the lead, with the skipper’s effort curling just wide.

A minute before the break a great cross by Darren Holden found Lawson eight yards out, but he couldn’t make a strong enough connection to trouble the keeper.

Consett, kicking with the wind behind them in the second half, didn’t have to wait long to make the breakthrough. Carr whipped in a corner from the left in the 50th minute, and new centre-back Matthew Ridley marked his debut by climbing highest to head home from six yards, pictured below.

Lawson hit a good half-volley just wide from 20 yards, and Carr had an effort superbly blocked by Matthew Wade after great work by Larkin and Holden.

Keeper James Winter denied Larkin a goal on the hour, spreading himself well to save, but there was nothing he could do when Consett did make it 3-1 in the 71st minute.

Larkin showed great workrate to win back possession and fed the ball through to Luke Carr, who cut inside a defender and buried his shot in the bottom corner, pictured below.

Ryhope almost pulled one back when Lay’s chip came back off the post, with Kyle Hayes beaten, but Consett had two great chances to make the final scoreline even more emphatic.

First, Dale Pearson, on as a sub after missing the last three games through injury, set up Larkin, who brought a good save from Winter. Then Pearson himself was clean through, but rolled his effort the wrong side of the post.

When the final whistle went it was a well-earned three points for Consett. And with second-placed Thornaby losing at West Auckland, and North Shields on FA Vase duty, the Steelmen are now eight points clear at the top.