Consett edged through to the 2nd Round of the FA Vase after a late penalty saw them beat Atherton Laburnum Rovers 2-1.

The North West Counties League visitors made the out-of-sorts Steelmen fight all the way for the victory, and had a couple of chances to win it themselves.

Terry Mitchell’s side were without top scorer Dale Pearson, whose red card against North Shields the previous week was upheld by the FA, meaning he will miss four games.

Colin Larkin took the No 9 shirt in one of five changes from the midweek win at Crook. James Martin returned at left-back, Nick Allen at centre-back, and Calvin Smith and Matty Slocombe in midfield.

Consett showed first, and had a chance after just two minutes when Luke Carr played the ball out to Jermaine Metz, whose cross found Larkin, but his effort was just off target.

Atherton showed they hadn’t come to defend when they created a chance of their own in the fourth minute, when Luke Nicholls outpaced the home defence, and Consett were grateful to keeper Kyle Hayes for a good block.

On 10 minutes the Steelmen forged another opening, when Metz found Ryan King, who fired over the top from 10 yards. Five minutes later some great work by Jake Orrell on the edge of the box teed up Larkin again, but he hit the side netting from a tight angle.

On 25 minutes Larkin had another half-chance when Orrell’s pass found Larkin, who controlled the ball on his chest and smashed his shot over the bar from a tight angle.

The breakthrough came in the 27th minute when Colin Larkin finished from a few yards out, pictured below, after a great through ball by Metz. It was his fourth goal for the club, and Consett’s 50th of the season in all competitions. 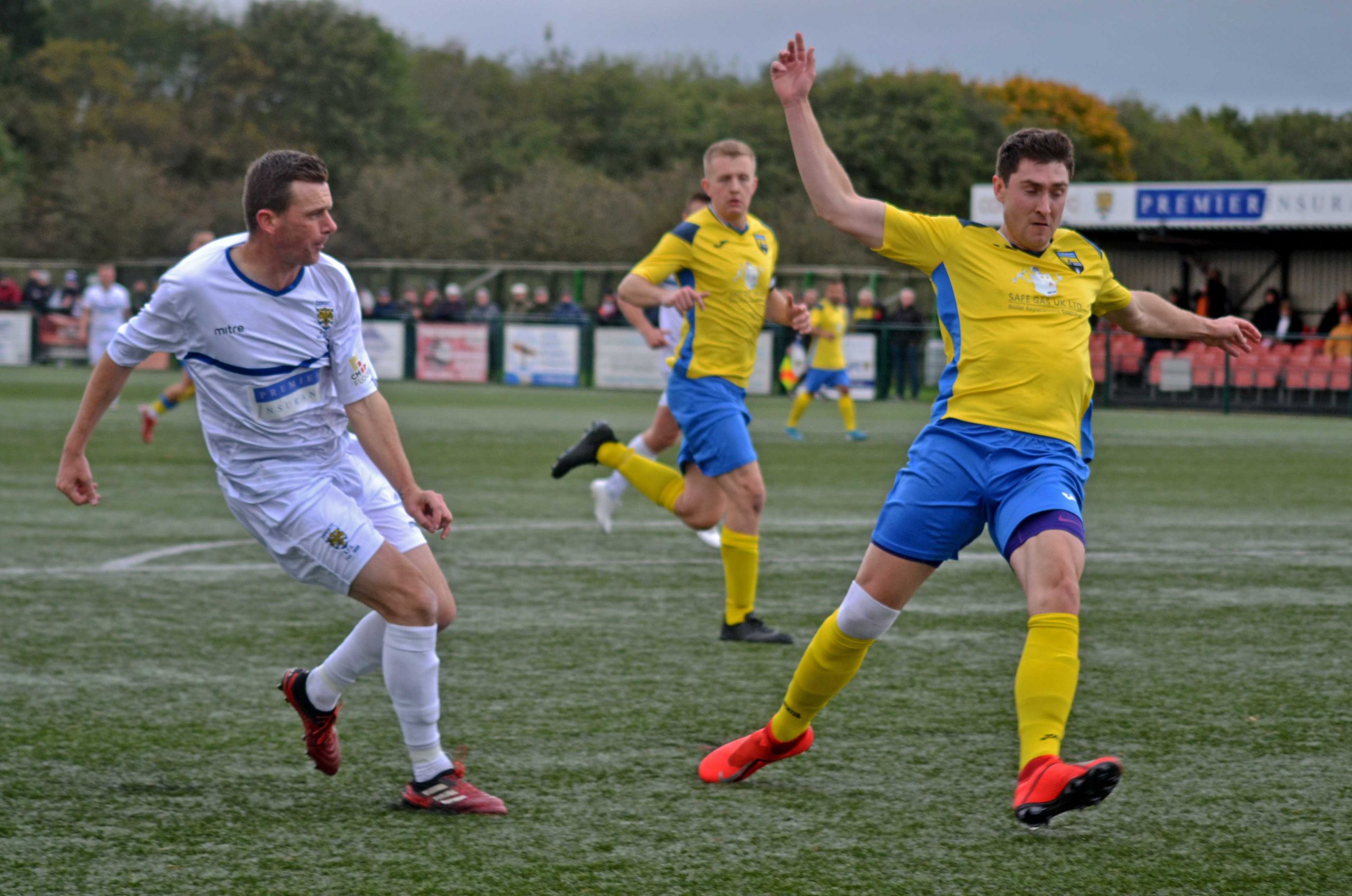 Carr almost doubled their lead on 38 minutes after being set up by Orrell, but his shot crashed back off the bar with the keeper beaten.

A half-time substitution and change of formation saw Atherton become much more of a threat than in the first half, and Travis Boyles had a chance a couple of minutes in, but fired just wide.

Then Boyles fired a free-kick into the home side’s defensive wall, and Josh Abbott blazed the rebound well wide as the visitors enjoyed their best spell of the game.

On 58 minutes Consett came close to doubling their lead when Carr played a lovely one-two with Metz, but Atherton keeper Joel made a good block.

On 64 minutes Metz was again the creator as Larkin was denied a second goal of the game by a good defensive block.

The missed chances were piling up for Consett, and they were made to pay in the 68th minute when they gave the ball away in their own half. Boyles played in Yacin Amarzou, who slotted it past the exposed Hayes to make it 1-1.

Three minutes later things could have got much worse for the home side as Boyles was clean through, but shanked his shot high and wide.

Atherton then had a golden opportunity to grab the win on 83 minutes when Amarzou found space again and tried to chip Hayes, but the keeper read his intentions and saved comfortably.

The game was anybody’s now, and to both sides’ credit they went looking for the win, rather than settling for a penalty shootout.

Consett had a good penalty shout turned down on 85 minutes when sub Dan Marriott was barged over from behind by defender Tom Horner as he shielded the ball.

A minute later Atherton had another chance to snatch a win when Boyles was again played in, but Hayes made a vital save with his feet.

The game’s deciding moment came on 88 minutes when Consett were awarded a dubious penalty, after the referee decided left-back Kaydn Craven had handled Carr’s goalbound effort on the line, pictured top. The ball certainly seemed to hit his face, though he was standing behind the line.

Despite his protestations that the ball had hit him in the face, the defender was red carded, and Luke Carr stepped up to make it 2-1 from the spot, and send Consett through to Monday’s draw. 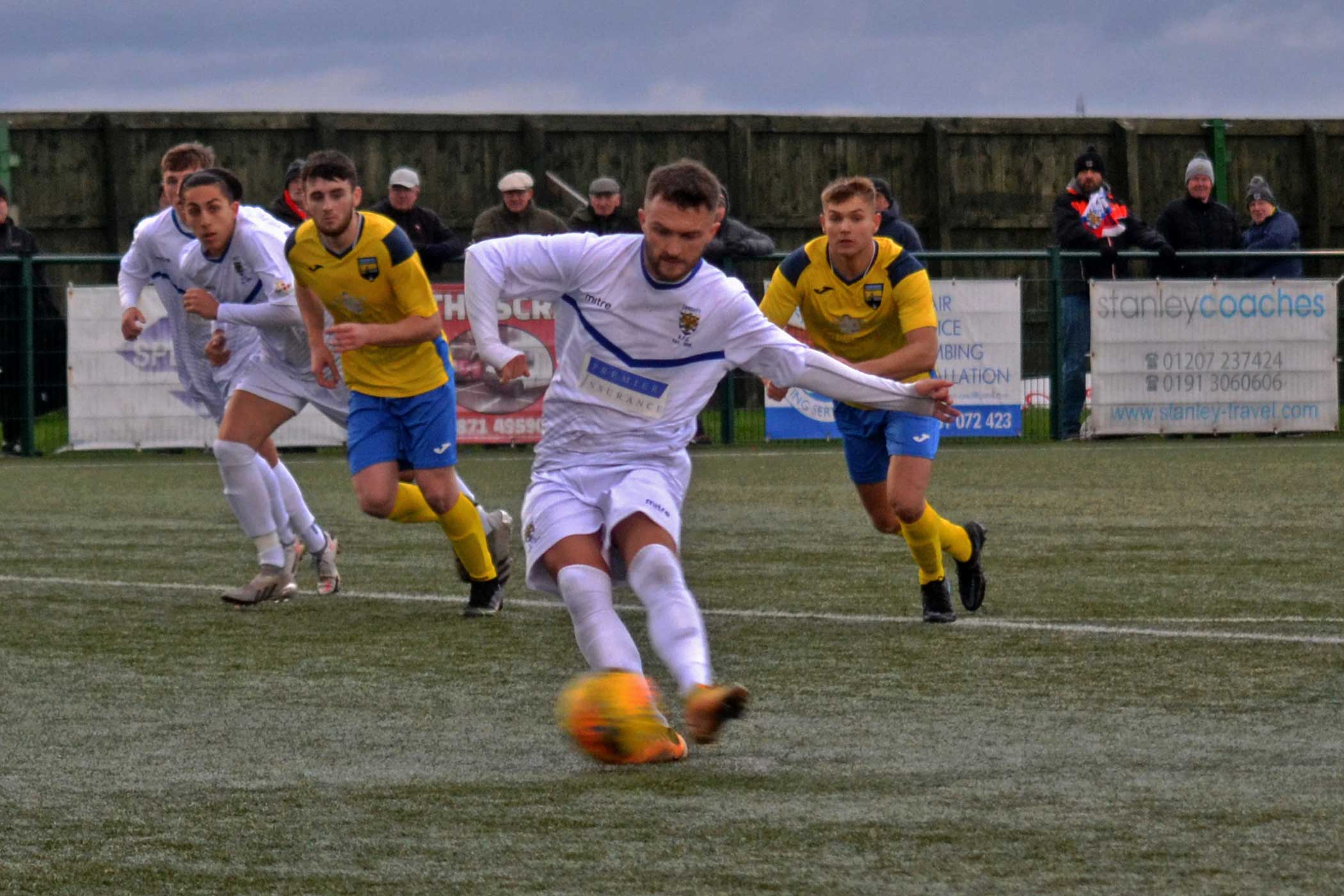