A first-half hat-trick from Luke Carr put Consett on the road to a 5-0 victory tonight in their annual pre-season friendly against a CM Flooring Consett Sunday League XI.

The midfielder was in irresistible form, and proved too hot for his opponents to handle in a 45-minute performance in which he showed his undoubted quality. 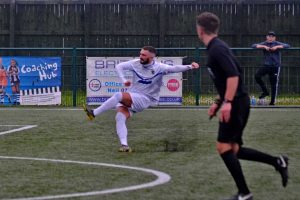 Carr opened the scoring after nine minutes, firing a free-kick into the bottom corner from 20 yards, pictured, after he had been fouled.

Carr doubled his tally on 21 minutes, with a controlled finish from close range after starting the move which saw new signing Ali Alshabeeb beat his man and deliver a cross to the back post.

Nick Allen, who impressed at left-back, hit the bar after a storming run into the box in the 38th minute.

But a minute later Carr completed his hat-trick from the penalty spot after a Sunday League defender handled on the line.

Consett began with a strong side, with eight of the first-team squad complemented by three trialists, and it was no surprise that they dominated the opening 45 minutes.

They rang the changes at half-time, with goalkeeper Kyle Hayes and Matty Slocombe – who started at right-back then moved into midfield – the only players to play the entire 90 minutes.

And they went 4-0 up in the 49th minute when one of seven trialists who featured in the game sent another clear in the right-hand channel, and he slipped the ball home. 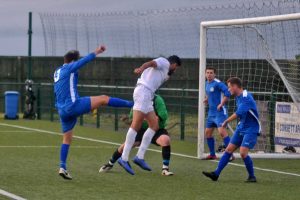 Former Consett keeper Josie Longstaff made a string of good saves to keep the score down, but there was nothing he could do about the fifth goal in the 81st minute.

Second-half skipper Arjun Purewal, who had earlier had a shot cleared off the line, headed home from a right-wing corner, pictured.

The Sunday League – who also had ex-Steelmen Lewis Teasdale, Adam Knowles and Carl Malpass in their squad – had a few chances in the second half, but found Hayes in excellent form. 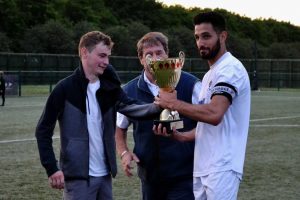 The trophy is played for every year in memory of his grandad, who was a Sunday League stalwart until his untimely death a few years ago.

Next up for Consett is an attractive home game against National League side Gateshead on Saturday, 13 July, kick-off 3pm. Normal pre-season prices apply – £5 for adults, £3 concessions and £1 for U16s.