Consett’s pre-season preparations took another step forward as they recorded a 2-0 victory against Northern League First Division side Northallerton, at a baking hot Belle View.

Arranged at short notice after original opponents Workington pulled out, two first-half goals were enough to secure a deserved victory, although the home side didn’t have it all their own way, with goalkeepers Mark Foden and Ross Coombe each making two excellent saves.

With manager Andy Coyles still on holiday, his assistant Richie Hill was again in charge of affairs, and with a number of players also away, there wasn’t the scope to field virtually different sides in each half, as he had done the previous week against Birtley.

There were plenty of changes though, with Dan Marriott and Zak Atkinson both starting, while newly-signed Karl Byrne made an official debut after being down as a trialist the week before.

Given the conditions, the game understandably started at a sedate pace and it was Northallerton who made the better start. They had an excellent chance to take the lead in only the seventh minute as a ball from the right found its way to Matthew Crust, who had the goal at his mercy only 10 yards out, but his well-hit low effort was superbly saved by Mark Foden.

That seemed to wake Consett up and they slowly worked their way into the game, with Karl Byrne in particular enjoying good possession down the right-hand side. Despite their increase in possession, Consett had to wait until the 21st minute for a clear-cut chance and they didn’t waste it as Danny Craggs latched onto a ball bouncing around the Northallerton six-yard box and turned and smashed it past Tom Dawson. 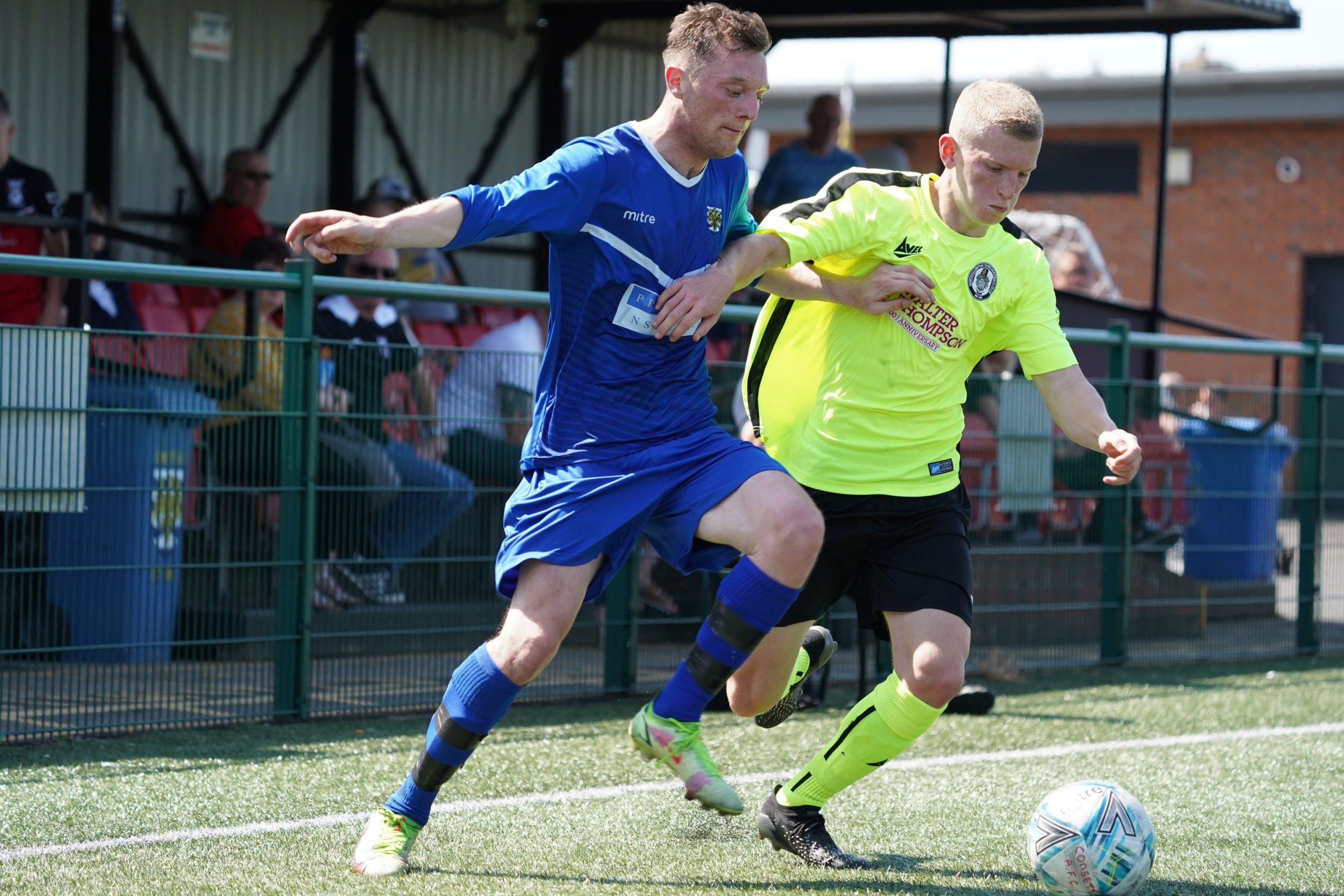 Following a scheduled drinks break due to the high temperature, the home side continued on the front foot and were rewarded in the 28th minute by a truly superb goal from new boy Karl Byrne. The Irishman gained possession just inside the Northallerton half, powered his way past two challenges, before cutting inside and unleasing an unstoppable swerving effort into the top-left corner from 20 yards out.

To their credit Northallerton came back into the game and continued to play good football, which will have been no surprise to anyone who witnessed their impressive victory at Belle View at the tail end of last season.

Indeed, their man of the match that day, Jack Stapley, was looking lively again, and he was involved in a good move four minutes before half-time that resulted in Nathan Stephenson hitting a 20-yard effort which looked destined for the top corner, only for the outstretched hand of the flying Foden to divert the ball for a corner.

There was one more incident in injury time as our trialist midfielder found the roof of the net, however the effort was ruled out for an offside earlier in the build-up and the Steelmen had to be content to go into half-time with a two-goal lead.

The second half began with no let-up in the temperature and perhaps surprisingly Consett only made one change at the break, with Adam Mitchell replacing Zak Atkinson.

Each side had a good chance early in the half as Jake Orrell curled a low effort from 20 yards inches wide on 51 minutes, then on 58 minutes Stephenson went clean through on goal but sent his shot wide with only Foden to beat.

On 59 minutes Byrne attempted to repeat his wonder goal from the first half, and did the first bit successfully, going past some defenders, but this time he didn’t quite make the perfect connection and his shot was straight at the keeper. 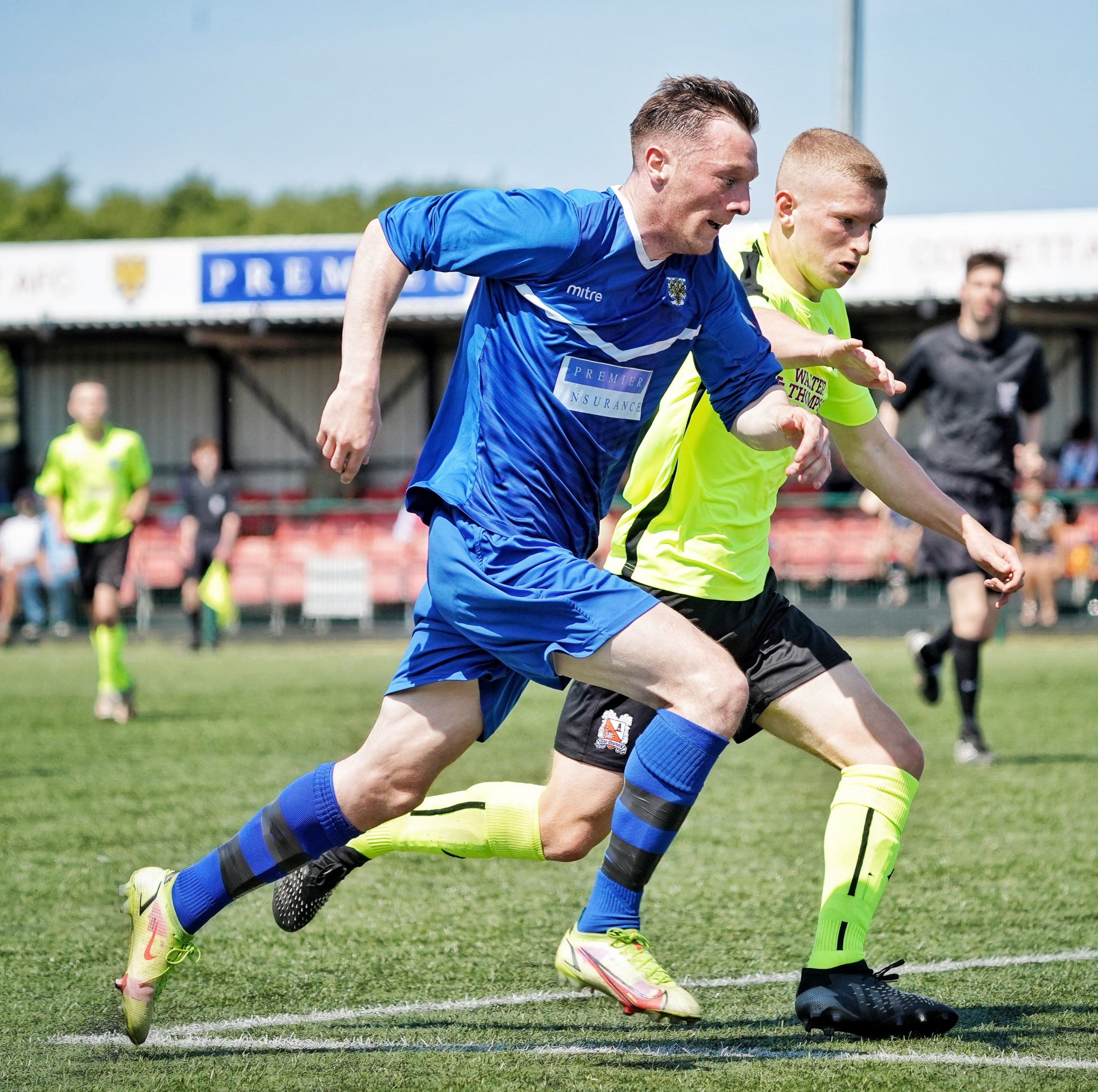 The expected raft of changes came as Consett made seven subs between the hour mark and the 65th minute, and it was one of those subs, keeper Ross Coombe, who was called into action on 72 minutes as John Howard hit a firm effort from 25 yards that needed to be beaten away at full stretch.

Another substitute then started to have an impact on the match and it was Darren Holden who went on a powerful run down the left on 75 minutes and his cut back found our trialist striker, who couldn’t quite sort his feet out and the chance went begging.

Three minutes later Holden was at it again with another lung-busting run down the wing, and this time he managed to find Mitchell, who was well placed on the edge of the area but could only send his effort straight at Dawson.

The final chance of the game fell to the visitors six minutes from time as defender Charlie Graham popped up in the Consett area, but Coombe was alert and made a smart stop with his feet to preserve the 2-0 scoreline.

The final five minutes petered out without incident and the referee’s whistle no doubt came as a relief to the players of both sides who could seek out some well-earned rest and a cold drink after providing a very entertaining game in tough conditions.

For Consett, they go again on Thursday night against another Northern League side in the shape of Whitley Bay, with competition for places starting to really heat up.

Subs: 46′ Mitchell for Atkinson, 61′ Coombe, Elliott and Holden for Foden, Byrne and Trialist A, 66′ Trialist B, Trialist C, Metcalfe and Bisset for Capewell, Craggs, Orrell and Marriott.