Favourites Consett crashed out of this season’s FA Vase, losing 2-1 to Wythenshawe Town in the 4th Round on an afternoon of drama at Belle View.

They took an early lead, played most of the second half with 10 men, and then conceded a late goal which gave the impressive visitors the win.

Manager Andy Coyles made three changes to the side which had won 3-2 at Seaham the previous week, with Jermaine Metz returning at right-back for the cup-tied Nick Cassidy, and Darren Holden and Luke Carr returning from Covid isolation at left-back and No 10 respectively.

Wythenshawe were a much-changed side from the one we met in the 3rd Round two seasons earlier, with only six of their 18 names on their teamsheet remaining from those two encounters.

Jake Orrell got the Steelmen off to the perfect start after just three minutes, picking up a loose ball outside the box, taking aim, and dispatching a superb strike into the top corner, giving the keeper no chance. 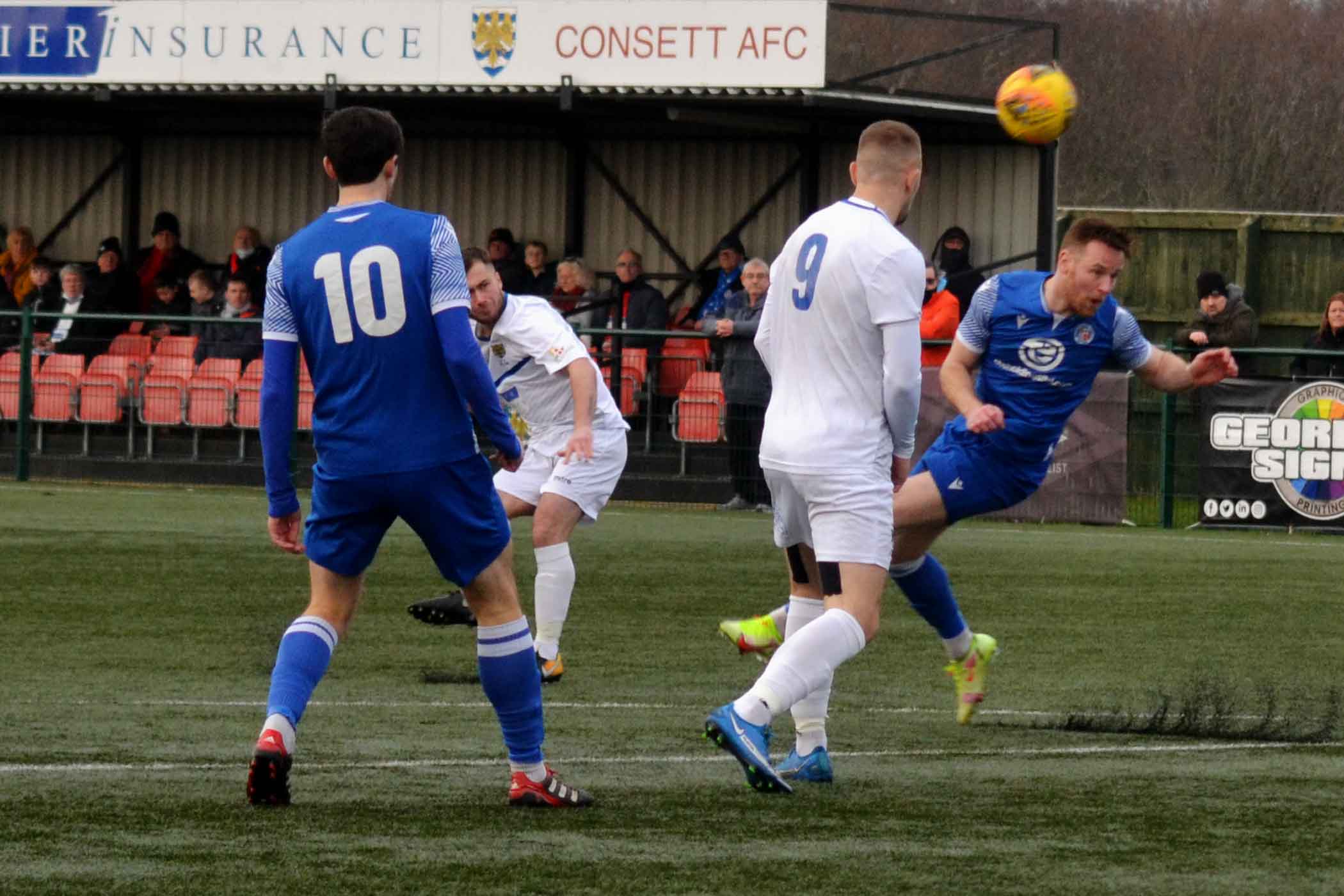 On eight minutes Consett almost doubled their lead when Luke Carr went on a run which took him past three defenders, and his effort had to be tipped over the bar by keeper Morgan Bacon.

Wythenshawe served notice that they were much more of an attacking force this time round when Brad Byrne – who scored against us in the 1-1 draw back in 2019 – hit the post with a header on 15 minutes.

Consett keeper Kyle Hayes then denied the same player with his feet, before Consett had a great chance at the other end, as Dale Pearson volleyed over from Darren Holden’s whipped-in cross.

The visitors were enjoying a lot of possession, and created a few half-chances, Greg Wilkinson trying his luck from 25 yards, but not troubling Consett keeper Kyle Hayes, and Matty Bryan off target with a couple of headers.

With little to choose between the sides, it remained 1-0 at the break, but the tie swung Wythenshawe’s way on 51 minutes when Consett’s Matty Slocombe was shown a straight red card for elbowing an opponent who was pulling at his shirt from behind. 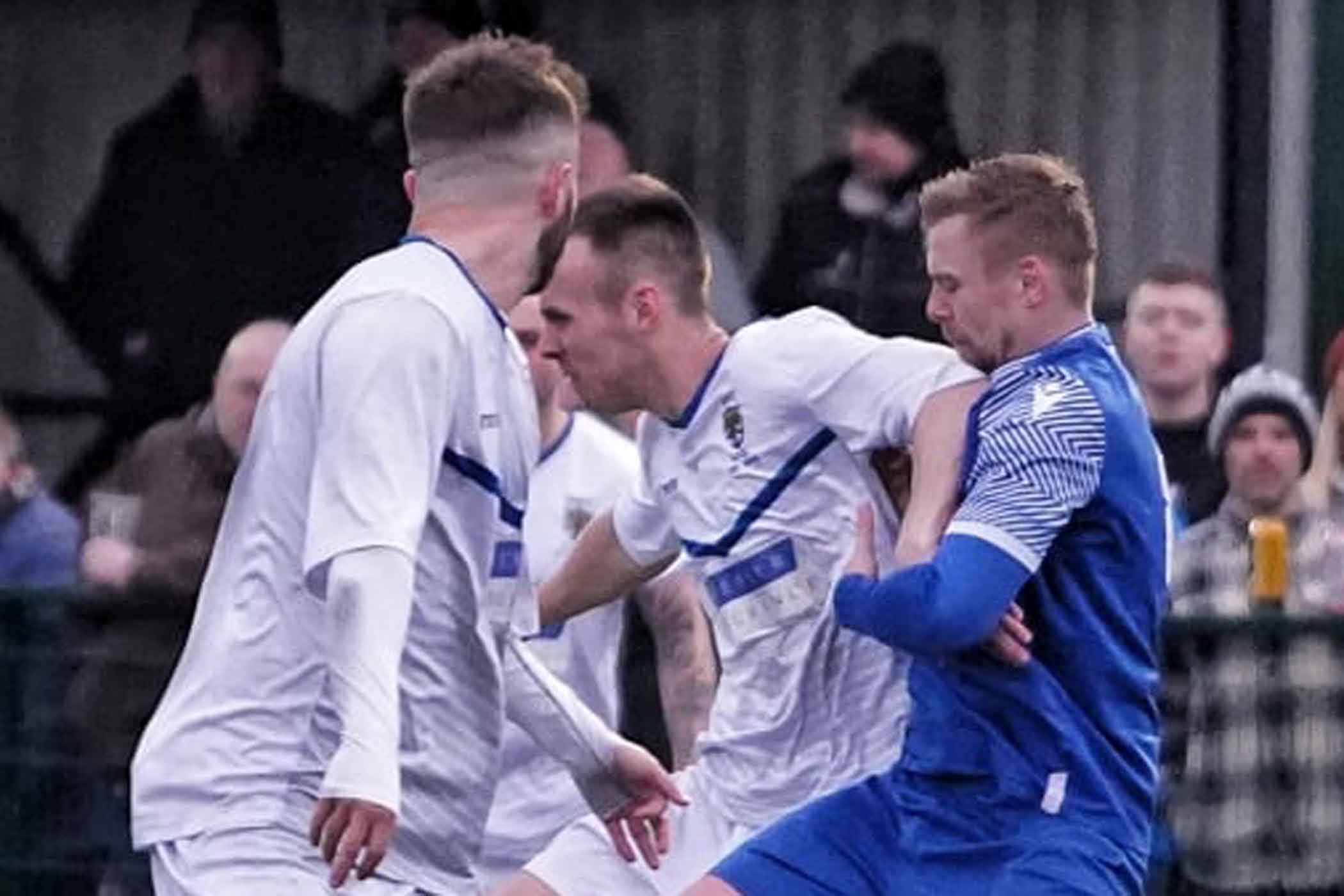 The player going down holding his face didn’t help, and nor did most of the visiting team surrounding the referee, but the incident gave the official a decision to make, and he made it.

The visitors were dominating possession now, but Consett defended well, and on the odd occasion that Wythenshawe found a way through, they couldn’t find a way past Hayes.

He saved well from Dominic Smalley’s 25-yarder, then produced an even better stop from Steven Hewitt, flinging himself to his right to keep out his well-struck effort from outside the box.

Consett were struggling to get out of their own half, and it took until the 85th minute for the 10 men to produce an attempt on goal, sub Nick Allen firing wide when a corner was half-cleared to him on the edge of the box.

The incessant pressure on the Consett goal finally told in the 90th minute, when, with the game looking like it was heading for penalties, Wythenshawe grabbed a winner.

Consett lost possession in the middle of the field, Byrne’s pass sent Matty Bryan away down the right, and his cross picked out Darius Palma at the back post. He brought it down and fired home to make it 2-1 and end Consett’s brave resistance.

When the final whistle went after seven added minutes it was Wythenshawe celebrating a place in the last 16 with their supporters, after claiming their third Northern League scalp in their best-ever FA Vase run.