Consett made it three wins out of three to start the season and progressed in the FA Cup after a thrilling 3-2 victory at Whickham.

As with the midweek league game at Northallerton, it was another late show from the Steelmen as they were twice forced to come from behind against a lively Whickham side.

They levelled twice through goals from Luke Carr and Jake Orrell before an 89th-minute header from substitute Carl Lawson sent the large travelling contingent of Consett supporters home extremely happy.

With the fixtures coming thick and fast, manager Terry Mitchell made three changes from Wednesday’s game, with Luke Carr returning in place of Dan Marriott in midfield.

Charlie Exley got a start at left-back against his former club in place of Darren Holden, while Colin Larkin came into the attack in place of Carl Lawson.

The home side included former Consett players Jack Norton and Dale Burrell, while Steve Bowey was named among the substitutes.

Consett started on the front foot and looked to have taken an early lead in the fifth minute.

Playmaker Callum Guy found Dale Pearson with an excellent ball over the top of the Whickham defence and Pearson expertly lobbed Jack Norton, however as he wheeled away towards the Consett supporters, the celebrations were cut short by an offside flag.

The next chance arrived on 11 minutes as Luke Carr lined up a free kick 25 yards out and his effort was heading for the top corner before Norton intervened to make a fine save and tip the ball over the bar. Skipper Arjun Purewal sent a header narrowly over from the resulting corner, pictured below. 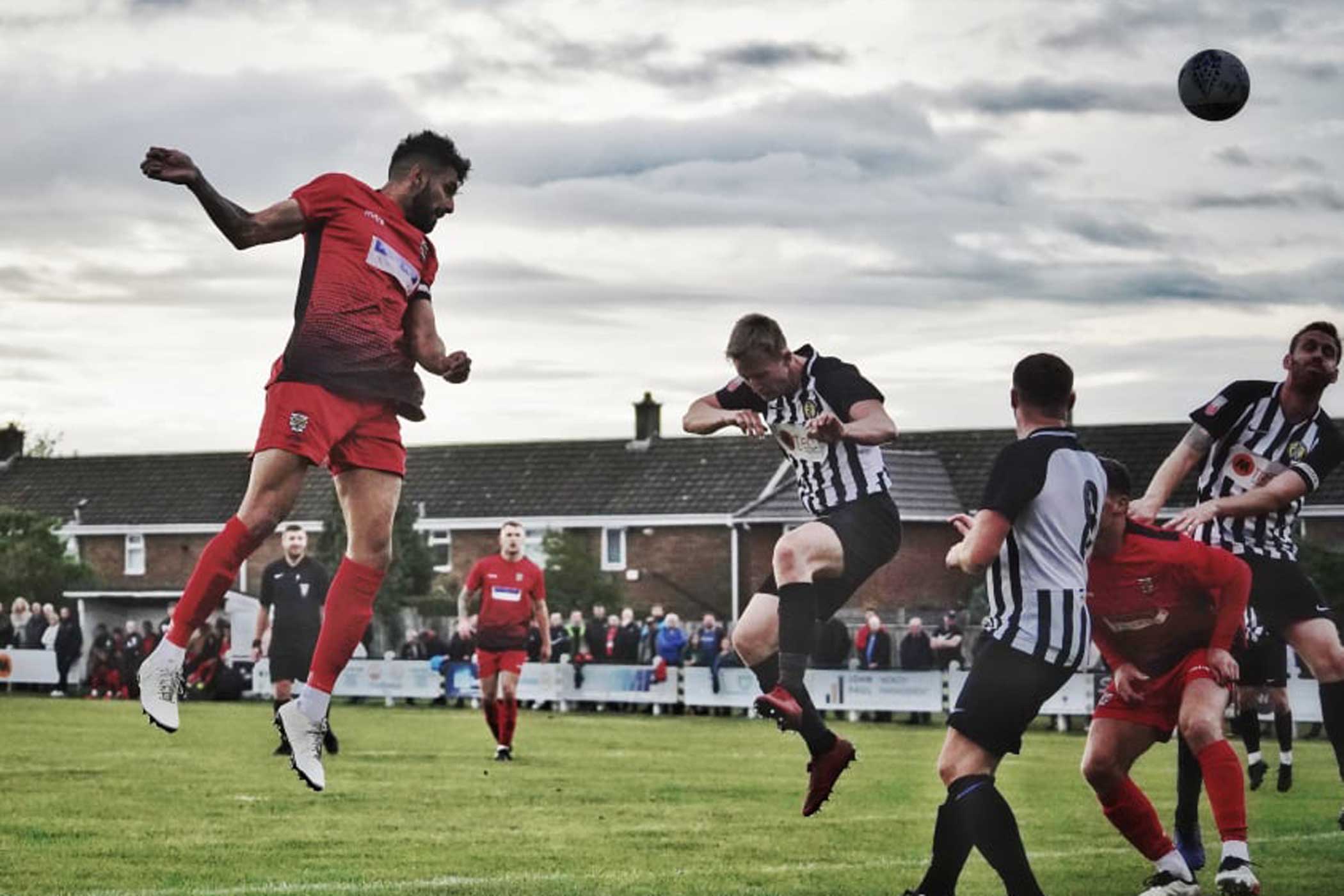 It looked to be only a matter of time before the visitors’ pressure would pay off, however they succumbed to a sucker punch in the 14th minute as Whickham took the lead with their first attack of note.

A good cross from the right wing found Scott Robson 12 yards out and although Kyle Hayes got a good hand to the shot, he could only help it into the bottom corner of the net.

Parity was deservedly restored in the 16th minute as the increasingly influential Luke Carr picked the ball up in midfield and advanced towards goal and as the home defence backed off, the number 8 unleashed an unstoppable shot past Norton into the bottom right corner, pictured below. 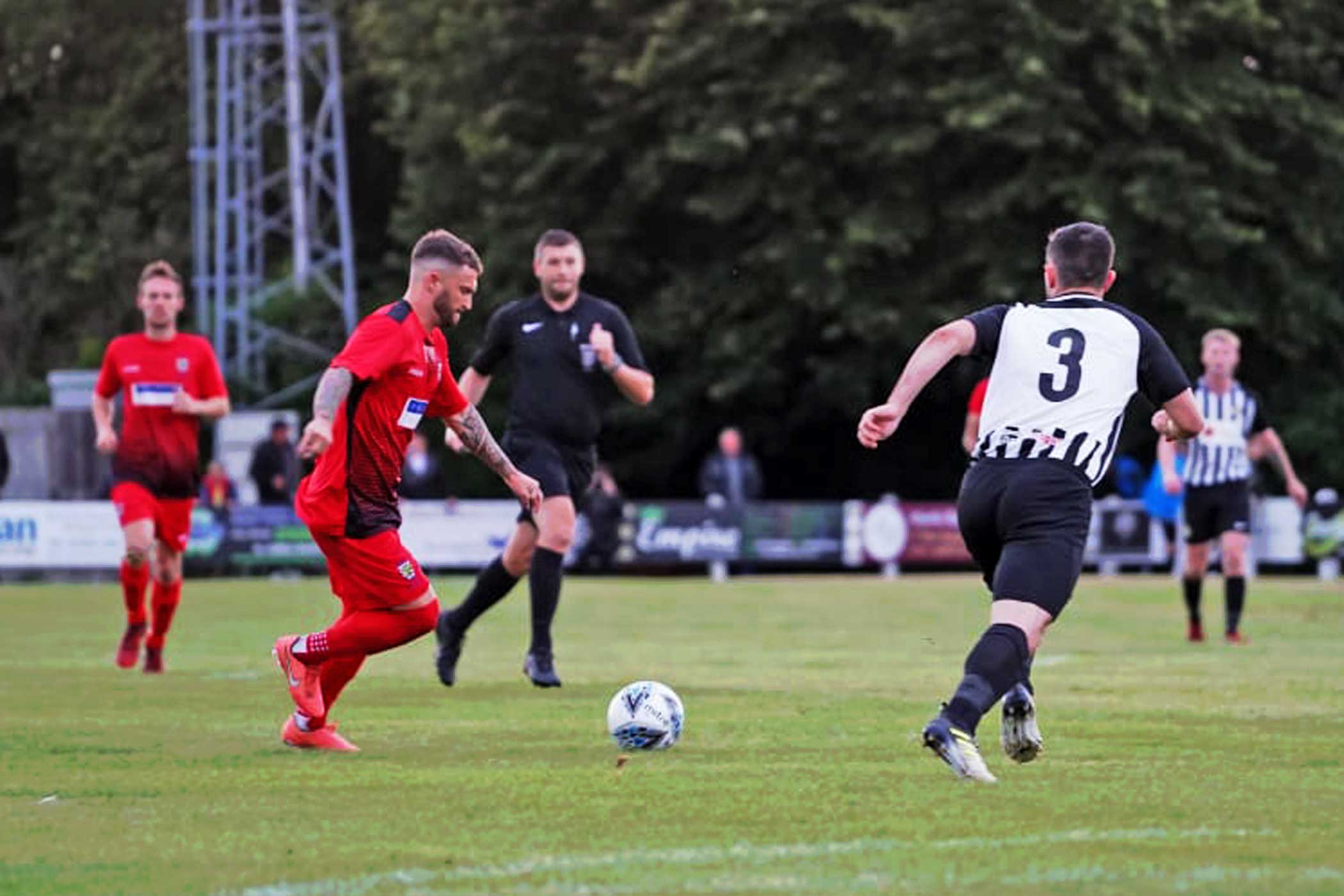 The game really sparked into life at this point and became an end to end affair, with Pearson for Consett and Zak Atkinson for Whickham both going close to scoring in the 18th minute.

Five minutes later Colin Larkin almost put Consett ahead as he rattled the post after linking up superbly with Jermaine Metz in a lightning-fast break following a Whickham corner.

However, not to be outdone the home side almost took the lead on 25 minutes as a deep cross found goalscorer Scott Robson alone only a few yards out, and Hayes had to make an excellent save to keep his header out. 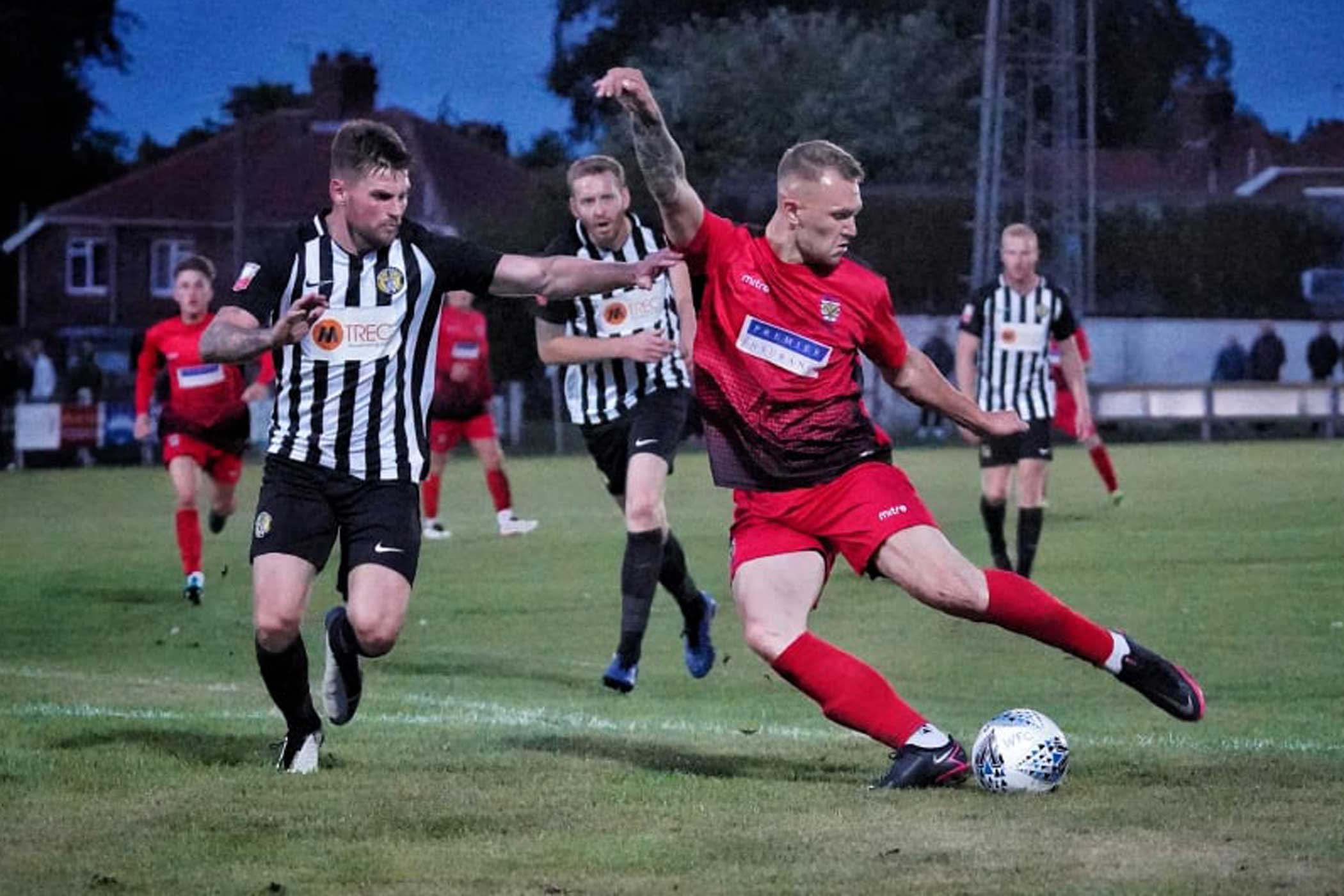 With half an hour gone, Charlie Exley almost came back to haunt his former side as he was left unmarked from a corner but he sent his header wide of the post with the goal at his mercy.

It was breathless stuff and the pace did begin to relent a little for the next 10 minutes, before a flurry of activity on the stroke of half-time as Hayes and Norton denied Jack Robson and Pearson respectively to send the sides in level at the break.

Where the first 45 minutes had been full of free-flowing football and chances, the second quickly turned into a much tighter and scrappier affair, with little goalmouth action to note.

The Steelmen did have a strong penalty shout on the hour mark as substitute Dan Marriott burst into the box and went to ground after feeling a push in his back, but the referee didn’t deem the level of contact sufficient to award a spot kick.

Consett were dominating possession but were finding it increasingly difficult to make any headway, and they were made to pay the price on 70 minutes as recently-introduced Whickham substitute Damien Stevens burst through a hole in the Consett defence and finished calmly past Hayes to restore the home side’s lead.

The goal seemed to inspire Consett, with an increase in the urgency of their play, and they had their first real chance of the second half on 74 minutes as Dale Pearson turned in the box and forced another fine diving stop from Norton.

Only a minute later the Consett centre-forward turned provider as he laid the ball into the path of Jake Orrell 12 yards out, and while most people were expecting the midfielder to look for a colleague, he expertly curled a shot past Norton into the top corner from a tight angle, pictured below. 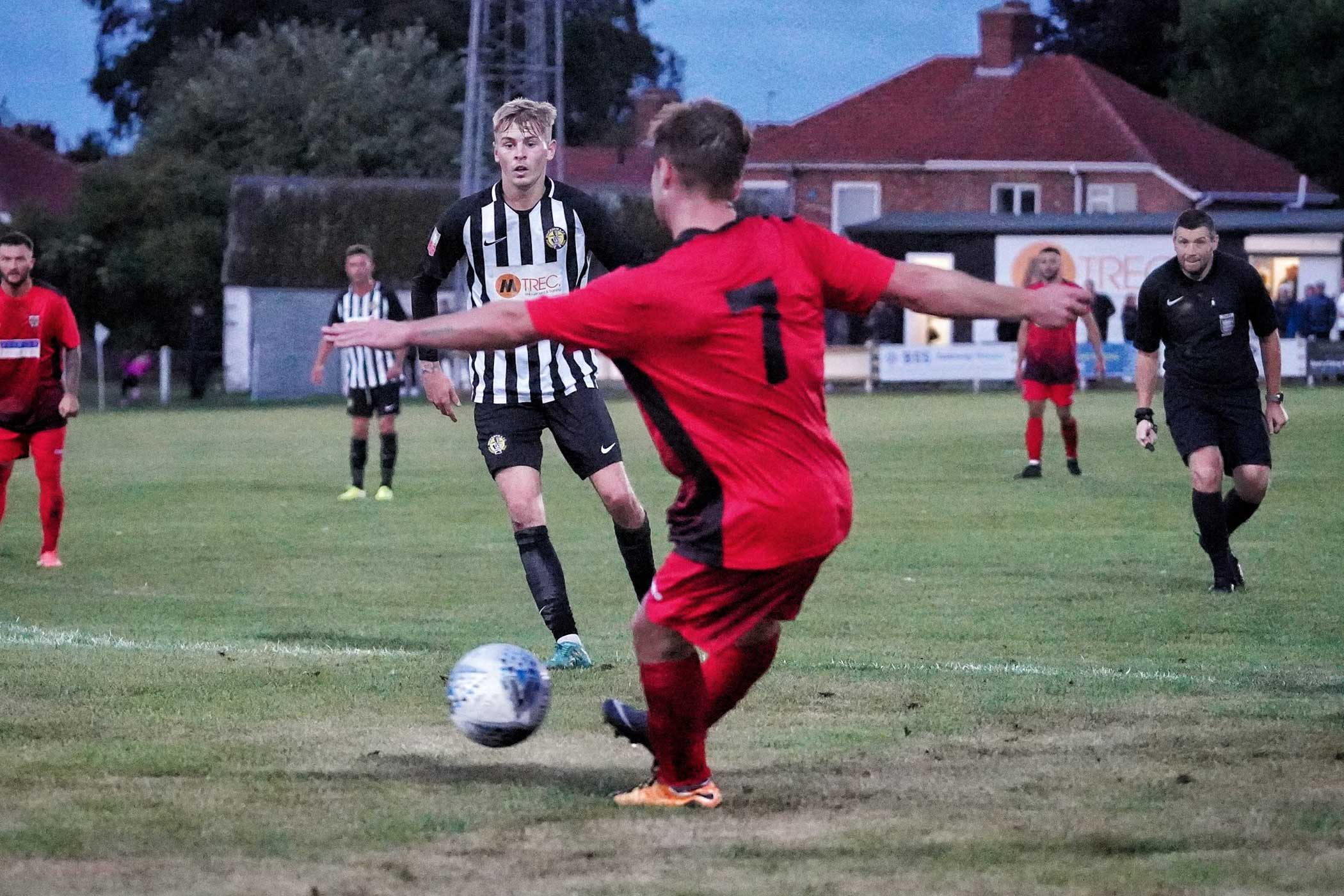 Not happy to settle for a replay, The Steelmen sensed a winner and continued to push forward in numbers.

It looked as though the chance to settle the tie might have gone in the 86th minute as Pearson shot agonisingly wide after latching onto a lovely slide-rule pass from Carr.

However, this team doesn’t give up, and in the 89th minute Pearson smashed a shot off the underside of the bar, and while players and spectators looked towards the assistant referee, pleading for him to signal that the ball had crossed the line (it hadn’t), substitute Carl Lawson calmly headed in from a few yards out.

The goal sent the massed ranks of the Conny Army behind that goal into raptures and the team into the Preliminary Round of the FA Cup and a home tie with Bridlington Town. 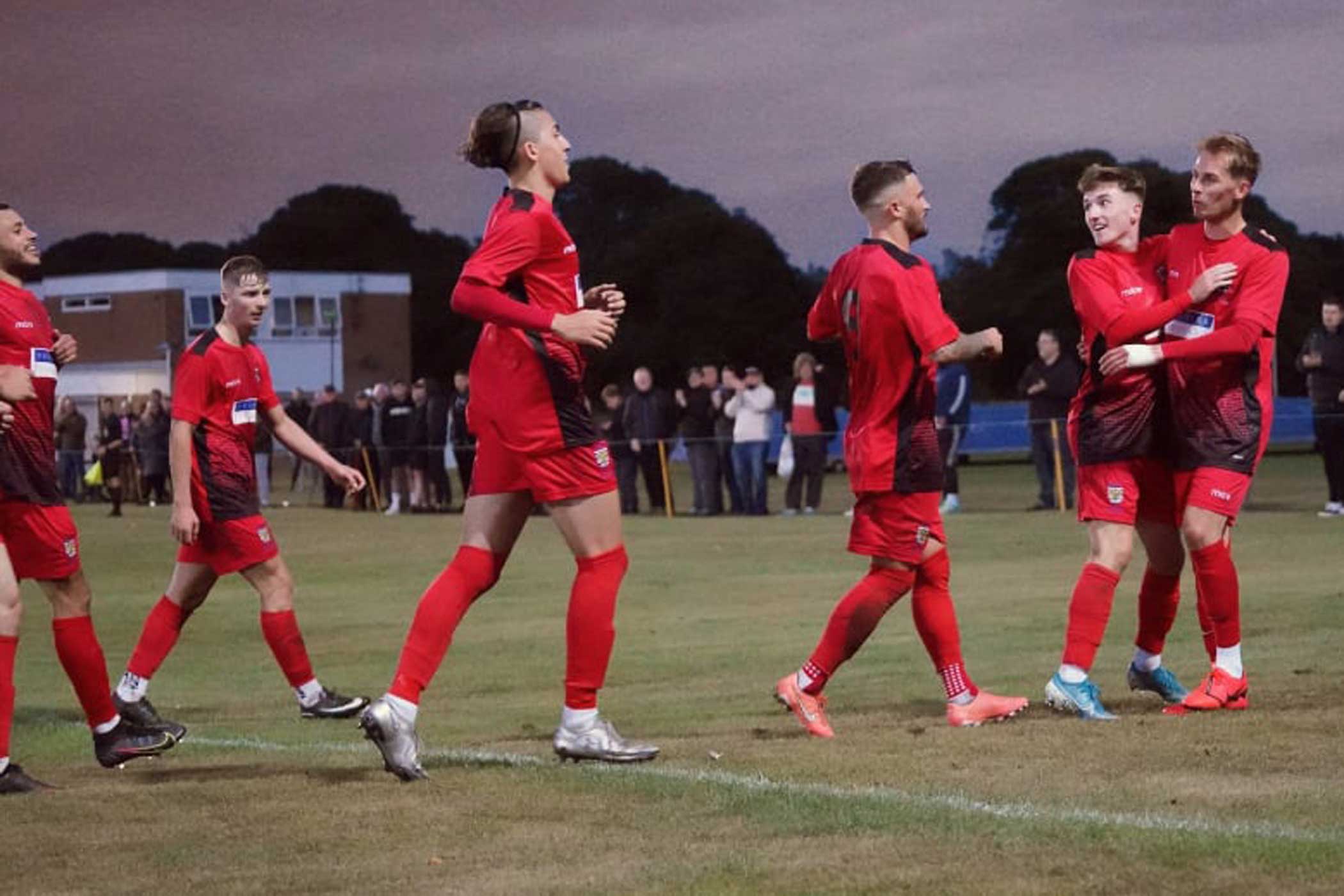