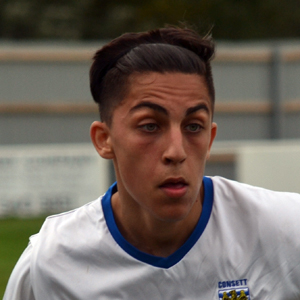 Previously with Consett Under-21s, he made the bench once for the first team before signing for 2nd Division Esh Winning to gain experience.

Re-signed in January 2020, and after impressing in pre-season against the likes of Morpeth Town and Sunderland U23s, he made his senior debut as a sub v Newcastle Benfield on 19 September 2020.

After several further cameo appearances off the bench, he was given his first start in April 2021 in the Durham Challenge Cup game at Birtley Town.

An unused sub in the FA Vase final at Wembley, he pushed on in the 2021-22 season and got lots more game time under his belt, featuring in 35 games.

After scoring three goals, including the winner at Histon which secured promotion to the Northern Premier League, Dan was named Most Improved Player at the end-of-season awards.