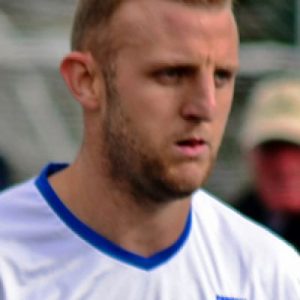 The experienced striker rejoined Consett for a second spell on 19 March 2022 after leaving West Auckland Town by mutual agreement.

‘Dowse’ came up through Sunderland’s Academy, and had three years as a pro at the Stadium of Light, with loan spells at Football League clubs Chesterfield and Darlington.

After being released by the Black Cats he played a handful of games for York City in the Conference before joining Durham City, where he was a prolific goalscorer in the Northern Premier League.

A move to Darlington 1883 followed, where he was a key member of their 2013 Northern League-winning side, before another move in 2016 took him to Spennymoor Town, where he helped them win the Evostick Northern Premier League play-offs.

He joined Consett initially on loan in September 2017, then made the move permanent after four goals in his first four games.

After 15 months at Consett he joined West Auckland, winning the League Cup in 2018 and Durham Challenge Cup in 2021, before rejoining the Steelmen for the last few games of the 2021-22 season.