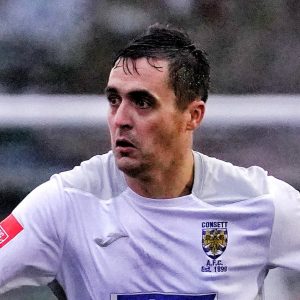 Hugely experienced left-back Evan, who has played professionally for several clubs, signed for Consett on 6 October 2022.

The 36-year-old was signed following the departure due to relocation of Darren Holden, and the fact that two other left-sided defenders, Charlie Exley and James Martin, are both on the way back from injury.

He helped the Cumbrians reach the League One Play-Offs in 2007-08, and was in their side for the 2010 Johnstone’s Paint Trophy final at Wembley, which they lost to Southampton.

After two and a half years at Brunton Park, during which he made 77 appearances, Evan signed for Hartlepool United, where he spent three seasons, playing 138 games.

Moves to Tranmere Rovers, Northampton Town, Grimsby Town and Chester followed, before he signed for Bala Town of the Cymru Premier League in July 2017.

He left in December 2019 to move back to his native North East, signing first for Whitby Town in the NPL and then for West Auckland Town in the Northern League.