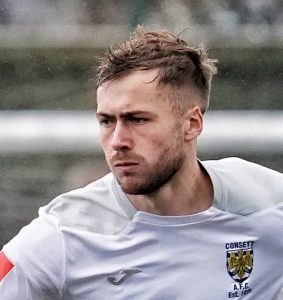 Signed on 27 September 2019 from National League North side Blyth Spartans, Jake made his debut as a sub the next day in a 2-2 draw at Stockton, and got his first goal in the League Cup at Bedlington.

He was at Sunderland Academy as a youngster before joining Gateshead, then earned a contract at League One side Chesterfield, where he made two first-team appearances.

He went on to play for Matlock Town (loan), Hartlepool United and Spennymoor Town, before switching to Newcastle Benfield, where he was a League Cup runner-up .

An ever-present in our 2019-20 FA Vase run, he scored twice at Winterton, and was a big miss when he was knocked out in the final at Wembley and had to leave the field.

Jake was the only ever-present in our 2021-22 promotion season, playing in all 50 matches, scoring 11 goals, and ending the campaign being named Managers’ Player of the Year. Has captained the side.