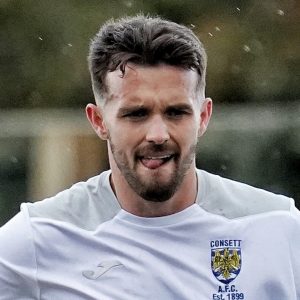 Lewis is in his second spell at Consett, having first signed in summer 2020 as football emerged from the coronavirus lockdown which had seen the previous season declared null and void.

He had spent the previous season with Thornaby, and came to our attention when he scored against us in a 1-1 draw at Belle View in August 2019.

It was his second spell at Thornaby, with some time at Easington Colliery in-between. His career began at Hartlepool United Academy, and he also has Northern League experience with Billingham Town and Norton & Stockton Ancients.

The odd man out of our 19-man squad which went to Wembley for the delayed FA Vase final, he started the 2021-22 season at Guisborough, but returned a few months later and signed a contract in the summer.