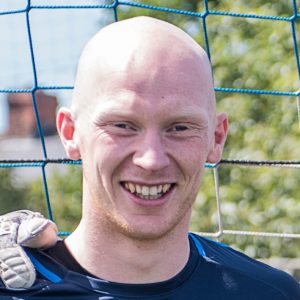 Glasgow-born Mark is an experienced keeper who signed for Consett in the summer of 2022 as we prepared to step up to the Northern Premier League.

Came up through the youth ranks at Hartlepool United before joining Ross County, and having loan spells at Stirling Albion and Stenhousemuir.

After a season at Gateshead he had a spell out of the game before joining Blyth Spartans in March 2019.

After playing two games on loan at Consett early in the 2019-20 season as cover for the unavailable Kyle Hayes he joined Hebburn Town permanently, and became their first-choice keeper.

Played against Consett in the delayed 2020 FA Vase final, and won promotion to the Northern Premier League with Hebburn at the end of the 2020-21 season.

Missed only one game for the Hornets in the 2021-22 season, but was released at the end of his contract when a new manager came in.