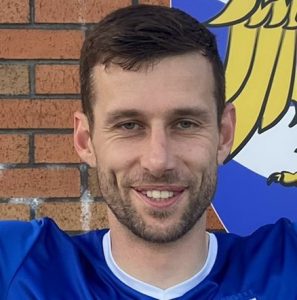 Another of summer 2022’s new arrivals. Began his career at Darlington when they were in the Football League, captaining their youth team.

After loans to Conference side Harrogate Town and Northern League Durham City, he made his first-team debut in March 2006.

After making six first-team appearances for the Quakers, and a spell out on loan at Workington, he was released at the end of 2006-07.

After a spell with Swedish lower league club Ostavalls IF, he joined Newcastle Blue Star, and then Sunderland RCA, while studying, before his career took him to London.

He joined Walton & Hersham of the Isthmian League Division One, and also played for Chipstead, Harrow Borough, Aylesbury and Uxbridge.

After returning north in 2021 he signed a one-year deal with Hebburn Town, who had just been promoted to the Northern Premier League, and also spent a month on loan with Seaham Red Star.