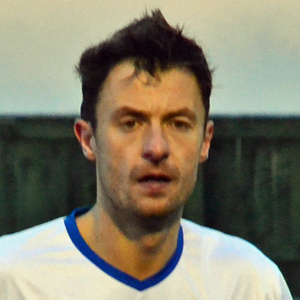 What more can be said about the club’s all-time record goalscorer, who – even at the veteran stage of his career – is one of the fittest players at the club?

Micky originally joined Consett from Durham City back in 2005, and scored 39 times for Kenny Lindoe’s side as they won the Northern League 2nd Division championship on a tide of goals.

He took the 1st Division by storm too in 2006-07, and had 43 goals by February, which prompted Hartlepool United to offer him a professional contract.

After three and a half years at the Victoria Ground he returned to Consett, and picked up where he had left off, taking his goal tally to 271 goals in 308 games before reluctantly departing for Jarrow Roofing in 2015.

Consett was where his heart lay, however, and he rejoined in summer 2017. his first season back saw him score twice as Consett beat Dunston 4-2 to lift the Durham Challenge Cup, and he was runner-up for Northern League Player of the Year.

In 2018-19, despite playing with an injury for much of the campaign, he scored 22 goals, and played his 400th game for the club. He missed most of last season while recuperating from an operation, and was just starting to feel his way back in when the campaign was abandoned, with Micky on 323 goals in 410 games in our colours.