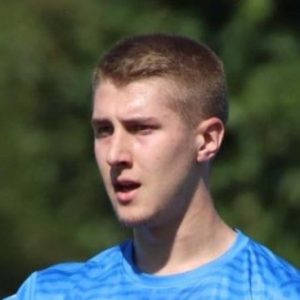 The young striker, from Darlington, was a prolific goalscorer in junior football before joining South Shields Academy, where he was part of the U18s side which enjoyed a record-breaking run to the FA Youth Cup 3rd Round before losing to Fulham.

He joined Boldon CA in the Northern League 2nd Division for 2021-22, and had scored 19 goals in 20 games by December. This form brought him to the attention of 1st Division Ryhope CW, where he added two more goals to his tally for the season and was part of the team that won the Durham Challenge Cup on penalties.

After Ryhope’s resignation from the Northern League in the summer he joined another Northern League 1st Division club, Newton Aycliffe. He scored four goals for them this season, including winners in games v Seaham and Crook, before signing for Consett on 22 September.

Quick, agile and good in the air, he made his Consett debut as a late sub in the FA Trophy game at Colne on 24 September.